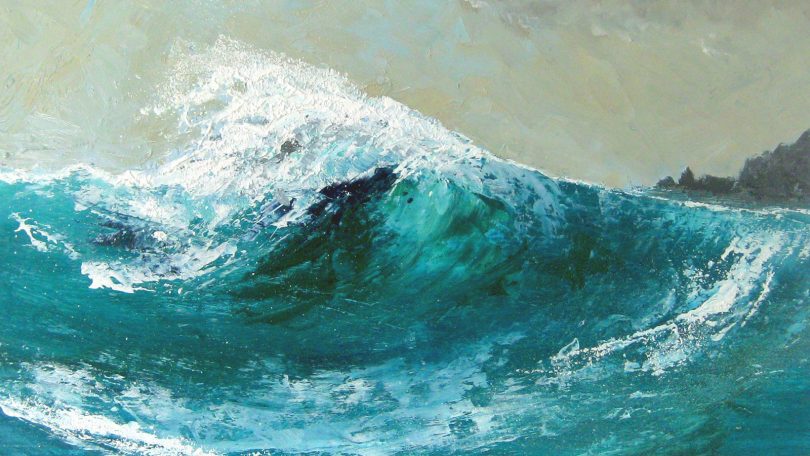 I’m fascinated by the movement of water and how it reacts in different circumstances, how it breaks and how the energy of the wave expels itself. It is constantly changing. As a small boy I was terrified of the waves, so I wonder if it is some sort of exorcism.

These are the words of a man who is now devoting his time to capturing pelagic nuances and transitions on canvas, someone who during his lifetime has been as intimate with the sea as a lover and adversary and who has been profoundly affected by its beauty and its terror.

Artist turned fisherman turned artist again, Bill McArthur’s life has in some ways mirrored the changes and transitions of the waves. He has gone with the flow, which is not to say life has always been plain sailing.

Born in June 1939 he lived in Dumfries until 1944 when his father became head of McLaren High School in Callander. His memories of the war include Norwegian troops in snow gear on the practice range behind his house, barrage balloons, and a few extra bunkers added to the local golf club courtesy of the Luftwaffe who had mistaken it for an airstrip.

At school Bill excelled in art and was encouraged by teachers Bill Stark and John Forrest. It was Bill Stark who brought him along to Edinburgh College of Art for the entrance exam and he began his studies there in 1957 specialising in drawing and painting and later moving on to Fine Art at the university.

He also became involved with the university’s literary magazine, Gambit, which he greatly enhanced by encouraging a host of well known writers to contribute.

It was at the time of the writers’ conferences at the Edinburgh Festival and I persuaded them their career was not complete unless they wrote for Gambit. The aim was to put their stuff in along with students and postgraduate writers and the big names would attract the readership.”

Among those who obliged were Henry Miller, Alex Trocchi, Eugene Ionesco, William Burroughs and Norman Mailer.

The writers undoubtedly added interest to the publication as did the inclusion in one edition of a nude photo of an art college student; however it also divided opinion. Bill describes the image as “a polarised black and white print, almost abstract in shape”, but it wasn’t abstract enough to appease the Students Representative Council, arousing the ire of one George Foulkes in particular.

After this Bill produced his own magazine The Cleft for a while until he completed art college in 1963. He had also met his wife Sue during those years and, after marriage, they moved to London where Sue taught in Acton and Bill worked for J Walter Thompson, which at that time was the world’s biggest advertising agency.

While it was interesting to start with it wasn’t a lifestyle to which Bill aspired, nor was living in London, so he returned to Edinburgh with Sue, working for a short time designing adverts for The Scotsman before starting his own screen printing business in the spare bedroom.

It turned out to be extremely successful. It was right at the start of the T-shirt printing craze and they printed the T-shirts for the launch of the Ford Fiesta, something Bill says he still has nightmares about today. There was no shortage or variety of materials which could be printed on, including the panels which decorated the bulk heads of British Airways’ first fleet of jumbo jets.

BA organised a PR exercise in which they invited the press to watch while we printed one of these huge screens which were 4ft by 8ft. Rowland Emett (the  famous artist, cartoonist, inventor and builder of unique machines) was there with his wife. It was a hair-raising experience. When we had finished there was a little blob of black ink left where it shouldn’t have been. We were going to fix it but Emett stopped us, took a brush and made it into a spider.”

There are many other such stories. The business ran for 11 years and grew to employ more than 20 people, but Bill felt he wasn’t cut out for the additional responsibilities of a managerial role. So in 1977 he decided to sell up and buy a boat.

The call of the sea

It may seem like a strange choice of career for a little boy who was terrified of the waves, but the magnetic pull towards the sea was in his blood from both sides of his family. His maternal grandfather worked as a seaman right through World War I. He was an engineer on merchant ships, was torpedoed twice and survived both occasions. His paternal grandfather had been a joiner in the days when joiners made everything from boats to coffins.

So Bill bought his first boat and armed with a chart he sailed alone up the west coast until he reached Sanday. He had decided he wanted to be a creel fisherman and Sanday seemed like a good place to start.

After two years he decided a bigger vessel was necessary and bought the Girl Shona, a 40-foot trawler/creeler and so he spent 20 years working the seas around Orkney, the Hebrides, as far west as Rockall and in the North Sea as far east as the Norwegian Sector.

In February 1987 the Girl Shona unfortunately hit an underwater obstruction off Skye and sank. After that Bill worked as a mate for Dennison Shipping for a couple of years before buying a much smaller fishing boat. It was while out fishing for bait in this boat around 1991 that he saw large grey shapes circling the line and discovered they were in fact sharks.

Porbeagle, also known as mackerel sharks, are found in cold and temperate waters and can grow to around 3 metres in length. Bill discovered they were in big demand. He caught four on his first trip, netting him around £200 per shark. The following week he had six sharks on board, each weighing around 18-20 stone and it became very evident they were too heavy for the size of the boat. Fortunately he called for assistance in time, but it was one of his scarier moments at sea, finding himself in the water with three of the sharks which were still alive and the rope tangling around his legs.

Following that experience he bought a steel boat, but he had also developed another source of income which now enabled him to regard fishing as a part-time rather than a full-time occupation.

In 1988 he had started doing a weekly cartoon for the Fishing News, something he continues to do to this day.

I sent a guy called Tim Oliver a few samples of work I had done and I’ve done one a week for them since then. It’s all very non-PC and centres on two characters Jim and Alec, semi-alcoholics, and Sweaty Betty at the Harbour Bar and I try to make it concurrent with the latest news.”

One cartoon per week wasn’t enough to survive on, so in 1992 Bill wrote to the editor of The Herald and sent him some of the work he had done for the Fishing News. That helped enormously and he was asked to do six cartoons a week which formed the basis of a reasonable income.

I also did the political cartoon for the opinion pages until 2002. I worked for the Herald for 10 years until newspaper sales started declining and economies had to be made. The first thing they do is shoot the cartoonist.”

Round about this time he started working for the Financial Times, doing pocket cartoons and illustrations, and he also began painting again for the first time since leaving art college in 1963.

When I finished with the Herald I picked up jobs with the FT in London, but only doing one or two cartoons a week which helped, but didn’t really fill the gap. I thought maybe it’s time to retire and go back to what I was trained to do. So I went out, set up oil paints and a board and it has gone on from there. Eventually enough people bought my work to make it worthwhile launching my own website./

My work is primarily seascapes. When you spend so much of your working life actually looking at the water there is a lot imprinted on your memory and some of it is scary scary stuff, but you should always paint what you know.”

Although he says he wishes he had kept up painting after leaving art college and is now discovering new techniques that would now be second nature had he continued, the honesty in his work speaks for itself. Yes it can be harsh, unrelenting, ragged and dark, with waves that could tear you to pieces, but there are also moments of calm peacefulness, clear skies and glassy seas.