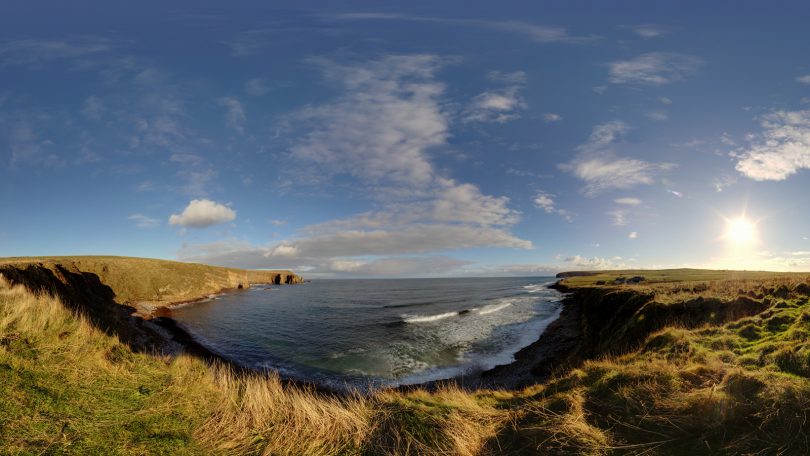 Ever since early photography people have wanted a wider field of view and there was a patent applied for a panorama camera as early as 1843.

Early panorama cameras were of the swing lens or rotation type. With the swing lens camera the camera is fixed and the lens rotates, moving the projected image across the film at the back of the camera as it scans the scene in front. The rotation camera as its name suggests rotates the whole camera and the film is wound past a narrow aperture to expose it. Neither of these cameras expose the whole scene at once, famously allowing children to appear more than once in group photographs.

First a video camera is rotated around a fixed point and a thin strip taken from each frame. These strips are then stitched together to create a panorama. The problem with this method is that anything moving in the scene as the camera is swung around makes strange shapes in the final picture. This can be done deliberately for effect like in this section of panorama of the Doric Open Fencing Tournament 2009.

3D scenes require parallax to make them work. It is the parallax between the different views of our two eyes which let us gauge depth in a view. To create a 3D cylindrical panorama start by mounting a video camera to rotate around a point other than its entrance aperture. For best results a motorised rotator going at a steady speed is essential. Once the camera has rotated as far as you require, going the full 360 degrees if desired, take two columns of pixels from each frame, one from the left of the picture and one from the right. Stitch these together to make two separate pictures. By combining these two pictures you will get a 3D view.

The idea is simple. Take pictures all around and stitch them together. The detail in doing it takes care but in the end it isn’t that difficult.

The first important step is to scan around and find the average exposure for the whole scene. The camera needs to be set to that exposure manually. This makes the joins between pictures less noticeable. It can mean that some areas of the panorama are over exposed and others underexposed. The exposure problem can be solved by taking a number of pictures at different exposure levels in each location. The computer then takes the best exposed parts of each picture to make a High Dynamic Range picture showing detail in both the bright and dark areas.

The next problem is parallax. The problem is especially relevant if there are objects in the foreground because their relative position to the background changes and makes stitching the pictures together more challenging.

The simplest (and most expensive) solution to the problem is a panorama head for your tripod. This allows the camera/lens setup to rotate around the entrance aperture of the lens which eliminates parallax problems.

As an aside this has caused arguments in photography discussion groups. Many panographers call this point the “Nodal Point”. The reason being is that it is a null point between parallax causing the foreground to move right and causing the foreground to move left. The problem comes from the use if the phrase “nodal pont” in optics. When modelling the path light takes through a lens system, rather than following its complex path through the various elements the light can be modelled as coming straight to a point on the centreline of the lens, turning to travel straight down the centreline and then turn to leave the lens system at the same angle it arrived. These two points are known as the nodal points and neither of them are at the entrance aperture.

Many Panographers now cut through the whole problem by calling the entrance aperture the NPP or No Parallax Point.

The next issue is how to get the panorama stitched together. There are many programs available to help. A popular one and the one I use is PTGUI.

There are many other programs for producing panoramas but I have not found one which is easier to use or has more functionality.

I first came across a program to make stitched panoramas in 1998 when Professor Helmut Dersch a lecturer in Mathematics at HFU Furtwangen released “Panorama Tools”. This was very labour intensive but a very accurate way of transforming pictures so that they would fit together into a panorama.

Later in 2001 New House Internet Services B.V. based in Rotterdam brought out a Graphical User interface for Panorama Tools, logically called PTGUI. This made things much simpler and they have added functionality since so that many of the tasks are now automated making things much simpler.

The final problem is the tripod. The one place the camera can’t see is where the tripod is standing (and the photographers shadow if it is a sunny day). One technique is to use what is known as “Tripod Cap”, this is just some graphic, usually the company’s logo placed over the image of the tripod to obscure it. The other way to handle the problem depends on the surface where the tripod stands. If it is outdoors on a natural surface such as grass or gravel then taking samples from all around the tripod and covering the tripod’s image with them makes a natural looking tripod cap.

If however the ground is patterned such as pavement or a tiled floor then the simplest way is to step to one side and take another picture which can then be stitched over the problem area.

The original stitched image of the Royal Oak Memorial in St. Magnus Cathedral. The tripod and the edge of the panorama head are stretched across the bottom of the frame.

The same scene with an offset picture covering the bottom of the frame. There are two problems with the new picture. Firstly while the floor is correct, the base of the pillars are at the wrong angle to match with the rest of the picture and secondly moving to a different location to take the picture means the lighting has changed, so the colours don’t match.

These problems are solved by firstly trimming the new picture to just cover the flat floor and adding a translucent gold fill over the new section to mask the colour change.

Panoramic Photography isn’t only for all round views. The techniques can be used to do two things. They can make large mega pixel and even giga pixel images, and the converging vertical lines which result from looking up at a building can be straightened out. I took the picture below as an. The image is 412 mega pixels. If it were printed out at the usual resolution of 300 pixels per inch it would be 7’ 5” by 4’ 4” (2.26m X 1.32m).

While it isn’t the only way, the way I am going now is up.

Cameras which can take a good quality image are getting smaller and radio controlled flying is becoming more stable. These two things combine to make it relatively straightforward to get a camera up in the air. My first attempt at an aerial panorama is of the dig at Smerquoy. It has turned out well enough to encourage me to try some more.

I don’t have the top of the sky in the panorama, the rotor blades were in the way so in this case the tripod cap has to go on the top rather than the bottom.

You can see more of John’s panoramas, with scenes ranging from the Churchill Barriers to the Brough of Birsay, at http://www.360cities.net/profile/birdy

John Leith is an instrument mechanic, computer programmer and photographer with a wide variety of interests in technology and history. After a career in industry, he moved back to Orkney, where he lives and works in his home parish of Stenness. He has a postgraduate diploma in renewable energy development from Heriot-Watt University through ICIT in Stromness and is a member of the Institution of Analysts and Programmers. He likes to try out new ideas whenever he finds an opportunity and looks after all the audiovisual challenges of the Orkney International Science Festival.