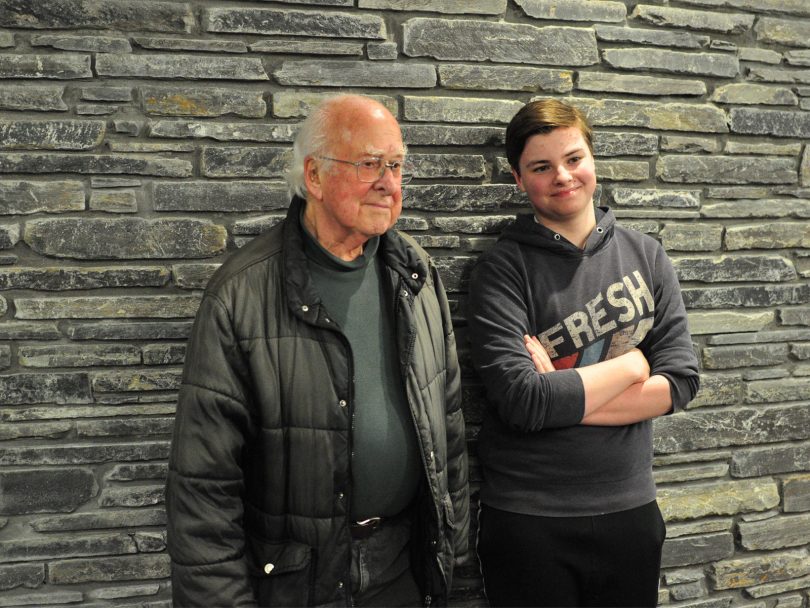 Prof. Peter Higgs with Finn McGill, who was the runner-up in the first Kirkwall Grammar School Higgs Award.

We feel strongly at the school that it is our responsibility to provide opportunities for our pupils to be inspired and motivated across STEM subjects. There is no better way to do this than through engaging with talks, shows and workshops through the OISF and we work hard with the Festival to maximise these opportunities.

The visit of Peter Higgs to the Festival in September 2015 generated a real buzz around the community and the school. The Festival team allowed us to reserve spaces for some of our students for the Peter Higgs talk and a number of teachers and pupils attended the event. At the time I enjoyed a conversation with a colleague who, like myself, is a fan of both science and football. In an effort to explain to pupils how big it was that Prof Higgs was visiting they likened his OISF visit to that of Pele or Messi coming here to play football.

When Prof. Higgs visited again in 2017 the excitement level was still high and we were really keen to capture this excitement longer term.  We had identified a real need for an award for excellence in science here at KGS and felt that having Prof. Higgs champion this award would be a really positive way forward. So the KGS Peter Higgs Science Award was born.

We will forever be indebted to Dr Alan Walker, without whom the award would not exist. Firstly, for all the work he has done through the OISF with school children here in Orkney – taking teams of people up with him to provide opportunities for our students to engage with physics. Secondly, it was through Dr Walker that Prof. Higgs agreed that we could use his name for the award. Thirdly, when Prof. Higgs was unable to present the award in 2018, Dr Walker facilitated the award travelling  to Edinburgh so that Prof. Higgs could be photographed holding the trophy.

The award is in its fourth year of presentation. The first two years we were able to use the Science Festival itself as a vehicle to present the award. Covid-19 has meant the last two presentations have had to be more reserved affairs. Having the opportunity to celebrate the success of some of our outstanding young scientists through this award has been a real privilege. Not only does it give recognition to those worthy students who can then use it to add to their personal statements and university applications, it also generates excitement around the other students.

The award has finally found a home in the Science corridor here at KGS in a display case. The winners are celebrated here, and there is a signed photo from Prof. Higgs to the Science Department on the wall alongside. As a theoretical physicist Professor Higgs was able to predict the presence of the Higgs Boson – and it does not take such a brilliant mind to see that the legacy of this award at KGS will continue to inspire and motivate our students long into the future.  And who knows, it may not be long before some of the winners and runners-up return to give talks of their own at the Science Festival.

Erland Johnston is the Principal Teacher of Science at Kirkwall Grammar School. After studying for an undergraduate degree and PhD at Edinburgh University he did his teacher training in Manchester. He has taught in England, New Zealand, and across the Highlands and Islands of Scotland.