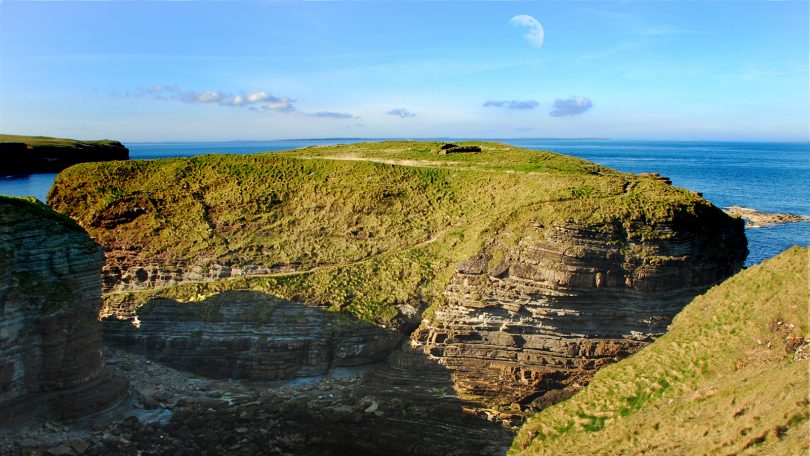 We passed fields heavy with stooks on green new grass, and one stack stood on gold stubble, conspicuous among so many waiting sheaves. Gold-tinselled corn-thistles grew by the road; green tufts of rushes covered a pale field.

Toadstools by the thousand had erupted from a silage pit; this is a toadstool year, for the mild damp weather has brought into being a multitude of varied fungi, many of them lovely in their peculiarly loathsome frailty. Frilled specimens, looking as though formed of coiled gossamer, with a tenuous grasp of the earth, have sprung up in our wet grass. Orange ones, more substantial and uneven in shape, now lie browning at the edges. Little saucer-shapes, pink tinged, and high-domed white things that shivered as we trod near them, appeared frequently during our Sunday walk. But when silage sprouts fungoid growths, what happens to the kye who eat it?

Two small boats sailed in the String, on a white-shot grey sea that was green and purple inshore where sand and seaweed lay. Flocks of birds were on the wind, in disc shapes that expanded and contracted their way into the distance. I wonder if some of those incredible-sounding UFOs that, according to a few dedicated sky-watchers, change shape and direction with amazing alacrity, may not be flights of migrants high in the sky?

Kirkwall’s gardens wore gay flowers. A pair of ponies watched us over a wall. Rooks rode air-currents above brown-edged trees.

A field near Grimsetter was deeply tractor-marked between its rows of stooks. Hangars were silver in the sun now breaking the cloud. Lichened trees, like beldames old and droll, raised withered arms by the valley of dragons’ teeth. Kye grazed among rashes. A blaze of orange montbretia shone by a garden thickly elder-hedged.

Dragons’ teeth studded the sand. Lyme grass waved tough-stemmed seed-heads, its pale green foliage beginning to change to a sandy gold. In Deerness, fields were closely stooked. A flock of plover rose, shining, and a wheatear flashed from a fence. We made a detour down a new road, then returned to the main highway, to see the Field Club members already congregated at Skaill.

Flowers in the sand

There were flowers in the sand for the bairns to list and collect: bugloss and sea rocket, charlock, dead nettle, annual nettle; and a glowing patch of orache as bright as any autumnal tree. Sea purslane and silverweed foliage were turning to gold. A burn-bed yielded a rare plant, water whorl-grass, and a delicate-looking, slended-branched sea pearlwort, close relative of a troublesome tiny weed, yet a thing of beauty in its own place. Burns cut sharp-edged tracks through the sand, and the largest of these, flowing past the house on the shore, was vividly green with water starwort and watercress.

Here we found a garden overgrown by comfrey, nettles and dockans. The house was untenanted but sound. A huge iron buoy surmounted a concrete base. The leaves of mimulus appeared in the burn. Vivid red campion still bloomed on the cliff’s edge, and a number of black sheep grazed nearby.

The kirkyard by the sea

Out to sea, behind us, rose Copinsay and the horse; dark craigs challenged them on the Deerness shore. The kirkyard perched on the shore’s edge at Skaill, with the kirk’s yellow-lichened roof repeating the autumn tones of the land.

A waterfall ran into the Gloup at one end, and the sea came swelling in at the other end, under our feet. Down the sides of this awesome hole grew sheltered greenery – grasses hanging sleekly, woodrush, scurvy grass, and a very handsome angelica in seed, its leaves wine-red and oat-gold. Ragwort, bush vetch and spear thistle grew around its edge, the thistles bursting full of soft-plumed seeds. Creeping willow, those miniature hanging trees, fringed the burn, and crowberry spread in the heather, its berries few.

From the Gloup to the Brough

Silverweed was now silvery-grey, its leaves curling against the wind. On the wet moor between the Gloup and the Brough were found adder’s-tongue fern and frog orchid. We halted on the shore while the first few members scaled the path leading to the Brough.

This is a most venerable place which I cannot in all honesty describe, because I did not attempt to climb the narrow path. Of old, pilgrims crept up it on their hands and knees; a practice which may have been due as much to caution as to sanctity. The first occasion on which I visited the Brough was in 1956, at this time of year and in much the same climatic conditions. Then, I wanted to climb on to the peninsula but my man dissuaded me. This time he made the ascent while I remained in the geo, contemplating cliffs and the sea.

A place of pilgrimage

The remains of a landward-facing wall could be seen, running around the top of the brough. From the opposite clifftop we observed signs of buildings, which are sinking into the untouched turf; no beast can get across to eat the grass, and generations of vegetation have flourished and died to form a deep spongy undergrowth from which rise the foundations of monastic cells, chapel, and other buildings pertaining to the various shades of religion of who-knows-how-many centuries.

Now, did the peace that seeped into my being come only from the calmness of the afternoon and the swell of the waves, or did the very rocks give forth a blessing? Centuries of prayer and meditation have hallowed this place; but was it chosen because of its atmosphere, or is this atmosphere something that was given to it? Here the early Christian monks have meditated upon the very boulder on which I sat; and certainly they have fished from that rock where brown and gold weed moved, and limpets clung; where whelks crawled, and barnacles had prisoned themselves in crusted colonies to give grip to feet walking over a slippery surface.

The sea lapped a tongue of rock and sounded into a cave. A semi-detached rocky headland, giving shelter from the south-east, grew fine green grass, sea pinks, and yellow lichen. Geological faults slanted down the face of the Brough, the intrusive rocks red-iron stained. At my hand were strange, grey-black honeycomb strata, down which had dripped, aeons ago, strings of honey-coloured quartz.

A seal swam in swelling black water, and turned its sleek head to look at me. Ripple marks of an ancient sea corrugated a stone. I picked up two pebbles, scarlet and white-streaked, that had come out of the dyke at my feet. The pilgrims descended the narrow path, and the spell was broken.