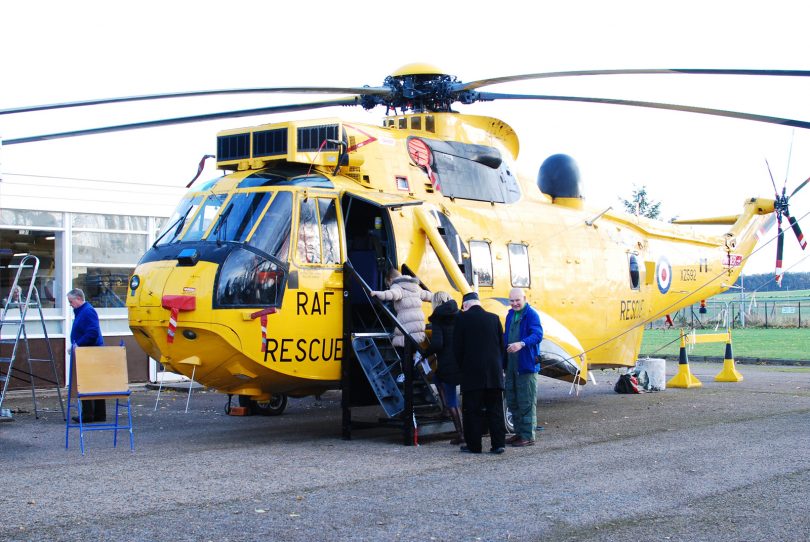 While it may at first sound like a small European principality nestled somewhere near Monaco, Morayvia is in fact closer to home than you think.

Like Monaco it is well worth a visit, only much easier to get to and a great experience for the whole family.

Strategically just across the road from RAF Kinloss, Morayvia is in fact Moray’s own science and technology centre, situated in the grounds and building of the old Abbeylands Primary School.

It has been set up principally to showcase the region’s military and aviation history and as a permanent tribute to the Aeronautical Rescue Co-ordination Centre (ARCC) formerly based at Kinloss. But there is more to it than that and plans are in hand for continued expansion.

Right now, in the school grounds there is a variety of aircraft and vehicles, including a 40-foot Nimrod cockpit, a Sea King helicopter and a Green Goddess fire truck, while inside the old school building there are instruments, artefacts, flying suits, rescue equipment, a Vampire jet and also a large state-of-the-art planetarium.

Morayvia offers the public a unique up-close look at aircraft and machinery and instruments as well as the opportunity to touch and feel, sit in the pilot’s seat and imagine what it would be like to be in control of one of these amazing pieces of aviation history.

But even better than that, you can hear the true adventures of those who have flown and worked on these aircraft; people like Pete MacIntosh, who can tell you what it’s like to squeeze into the tiny cockpit of the Vampire and the discomfort of having to wear a compression suit.

My instructor was a tall bloke and he was forever hitting me in the face with his elbow and I would have to go ‘Oh that’s all right sir’.”

Then there’s Bob Pountney, a former winchman on the Sea King, who has lifted many people to safety; and others such as Bob Russell, Sean McCourt and other retired aviators who are as passionate as ever and are now volunteering their services to get this project, if not literally off the ground, then certainly on the road.

Formed in 2011, Morayvia’s first mission was to save the last Nimrod from RAF Kinloss when the Ministry of Defence closed the base in 2010.

After being granted charitable status in January 2012 it was, the following month, able to buy the Nimrod with the help of donations and its own members.

It was a proud moment for Chief Executive Officer Stan Barber, a former Nimrod captain himself, when Prince Philip, a supporter of Morayvia’s work to establish a Scottish Aviation Museum, agreed to allow his name and heraldic standard to be displayed on the Nimrod.

The aircraft was formally named “Duke of Edinburgh” at a special ceremony in January 2014 at Kinloss Barracks. It is hoped that one day soon this particular aircraft will be Morayvia’s showpiece attraction.

With this in mind, the volunteers have been working hard to raise funds and generate publicity for the project. This has involved taking exhibits on the road, the length and breadth of the UK, including the front 40ft of a second Nimrod which now forms part of its exhibits.

As the biggest mobile aircraft cockpit in the UK it has certainly proved itself as a publicity generator, having hosted 12,000 visitors and raised £12,000 in its three years on the road.

Other aircraft cockpits such as those of a Jet Provost and a Vampire have also been used as mobile exhibits.

Vision for the future

Fundraising is a necessary part of Morayvia’s ambitious main objective, which is to establish an interactive Science and Technology Experience Project encompassing a Scottish Aviation Museum.

Plans have been submitted and although the project has been described as a potential “jewel in the crown” for tourism in Moray, funding has been slow in coming forward.

That however, hasn’t daunted the crew members who have established their fixed base by leasing the unused primary school and surrounding land from the local council.

We were looking for a temporary home for a minimum of about five years,” Stan says. “It was a council building, former school, it was no longer needed, but it was being vandalized.

We mounted patrols from November 2013 every night, not with baseball bats, but just to deter and show that it was being used.”

As Stan says, you can never beat vandals, but there have been no incidents for a year now and the school site is proving ideal for the project with plenty of space both inside and outside for exhibits and a shop with items to please any aviation enthusiast.

The intention is also to open a cafe, but right now the budget doesn’t extend that far, he says.

The planetarium, which was funded by £25,000 of support from the Gordon and Ena Baxter Foundation, has been set up in the old gym hall and is proving a huge hit with families and school groups.

A tour of the solar system and night sky can be given by Stan himself who is chairman of Moray’s Sigma Astronomy Club or by club president Bill Leslie.

There is a small fee to visit the planetarium and the exhibits, but entry to the shop, with its array of original souvenirs and memorabilia, is free.

We are trying to keep the prices sensible in here because we want people to visit and we also want to keep it family oriented,” says Stan.

Open only for a short season from October last year until Christmas, Morayvia has already established itself as a visitor attraction. It wound up its first season with a very successful Santa’s Sea King Grotto and re-opens on Good Friday (March 25) for its spring and summer season. There are more details on the Morayvia website which is currently being redeveloped and also the MorayviaFacebook page.