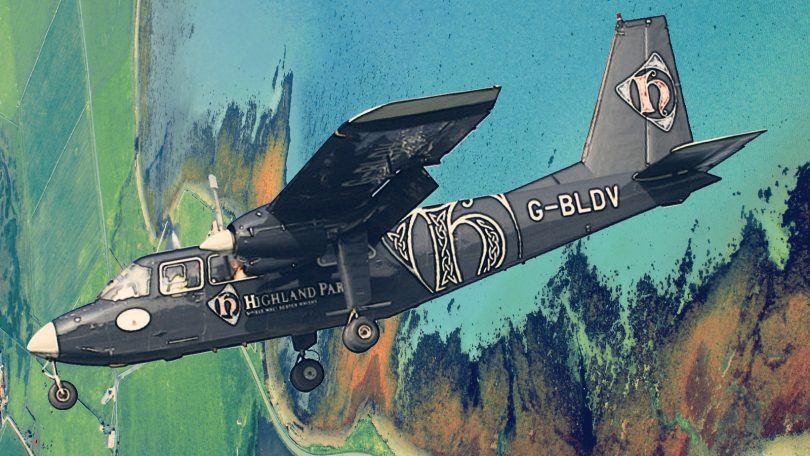 John Britten and Desmond Norman  had trained with the de Havilland company and found they both shared a dream – to design and build aircraft of their own. They also shared a passion for sailing and they designed together a 70-foot schooner, the Wavewalker, so well shaped that in later years she would survive a force 11 storm in the Pacific, hit by a wall of water.

The Britten-Norman route to aviation success began with crop spraying. They learned of a revolutionary rotary atomiser – the Micronair Atomiser – and they recognised its potential for use with small planes. They started by converting government surplus Tiger Moths and eventually had a fleet of 80 crop-spraying aircraft. They also collaborated with an American company which was producing a plane which subsequently became the Rockwell Thrush Commander.

Their crop-spraying operations were taking them to various parts in the world where they could see that new approaches to transportation were needed. What do you do in territory where roads are non-existent and costly to build and rivers are seasonally unnavigable? In 1960 they designed and built the world’s second hovercraft, to carry bananas from plantations in the Southern Cameroons. They set up a subsidiary company to manufacture it, which was later sold.

A new type of aircraft

Then they came up with an all-round solution to the transportation problem: a new type of small aircraft, with short take-off and landing requirements, rugged go-anywhere construction, low capital cost in relation to seating capacity, and highly adaptable for a myriad of uses. Their experience in Africa has showed the potential for the plane; the challenge now was to find the capital to build it.

Selling out their share in the crop-spraying operations would raise some of the money, but to build the new plane and take it through its stages of development and testing required more. A bank loan was possible – but only if they could show they had a firm order, and here the problem was the old chicken-and-egg one, since before they could get an order, they had to have a working plane to show prospective customers. This is where providence, and Orkney, came in.

They were members of an aerobatic flying club, and among the others there was a neurosurgeon from Orkney, John Firth. He was also the Conservative candidate for the islands, and his mind was very taken up with the challenge of transportation and medical services to the outer isles. Back in the 1930s Orkney had had led the way with a superb service developed by Capt. E.E. (Ted) Fresson – his company Highland Airways had operated an eight-seater de Havilland Dragon to land on grass runways and carry passengers and the mail and provide air ambulance flights. But after the war, nationalisation had led to the absorption of Captain Fresson’s company into the new British European Airways, which discontinued the small island services. Technology in the years that followed seemed to be moving in the direction of bigger planes and airfields. John Firth realised that here was a design that could carry on where the de Havilland Dragon had left off – and transform island life. The challenge was to find a way to help Britten and Norman get their first order.

At this point he had a flash of inspiration. He remembered a conversation with another of his acquaintances who was also trying to solve a problem. This was Captain Duncan MacIntosh, who was working for Willie Logan, the Muir of Ord contractor.

Willie Logan had joined his father’s small stonecutting business in 1932 and built it up into a major Scottish civil engineering company. By the 1960s he was carrying out projects across Scotland, ranging from the pulp mill at Corpach to much of Cumbernauld new town – and the Tay Bridge. He used an air taxi firm to help him, with Duncan McIntosh as chief pilot.

Building a bridge and building an airline

‘Captain Mac’ had flown many planes – Spitfires, Mustangs, Hurricians and Typhoons in wartime in the Second World War, Vampires and Gannets as test pilot afterwards. He had a vast experience of flying in all conditions and was a natural leader. And providing an air taxi service for Willie Logan, he learned of a problem. The company needed to take more skilled men from the Highlands to work on some of its key projects. An aircraft was needed with greater passenger capacity than the little air taxis of the time – but such a plane did not exist. John Firth realised the significance of the Britten-Norman design. He went to see Captain MacIntosh with a sketch of a new plane on the back of an envelope – and an answer to his transport problems.

With a plane like this, he said, Logan Construction would be able to have groups of skilled workers moved, and there would also be business to follow in the north, in Orkney in particular. “Jokingly, we could start an airline (one of Duncan’s ambitions): could even call it Loganair to flatter the boss.”

So the order went through for the first Britten-Norman aircraft, which they decided to call the Islander. And today it is the best-selling commercial aircraft in Western Europe, used in some of the world’s harshest environments for everything from fisheries protection to policing.

For the North Isles of Orkney, it has transformed life, making it possible for every kind of service to be delivered – the mail, the newspapers, doctors, dentists, nurses, vets, bankers, telephone engineers, specialist teachers. A spare part for a car or tractor can be on the plane from Kirkwall within hours. The seats can be taken out, to convert the Islander into a freight plane or an air ambulance.  Among the Islander-operated Orkney routes is the world’s shortest scheduled flight – the two-minute sector between Westray and Papay.

Today the Orkney airstrips are tarmac, rather than grass, but the plane’s rugged and reliable tradition of service continues, as it does in challenging situations around the world, from Africa to Antarctica.

Once Britten and Norman had got the plane into production, they saw sales rise; and they came up with more designs, including the 18-seat, three-engined Trislander, and then an idea for something even more challenging and visionary – the Mainlander. It would be able to carry 100 passengers or ten tons of freight or vehicles.

By this time, the challenge of cash flow proved too much and they had sold the company to the Fairey Group, staying on for some years to ensure the smooth transition to the new structure. The Mainlander did not develop, but they continued with other ideas. When John Britten died in 1977 he was working on a design for a new training/touring aircraft, to be called the Sheriff. Desmond Norman worked on various other designs, including a twin-turboprop, 19-seater, multipurpose Skylander, to be built by a French company. Other projects that he was working before his death in 2002 included the Norman Weekender, a folding-wing two-seat biplane designed to fit in a box towed on a trailer, ready to fly in a few minutes, and a short-take-off-and-landing aircraft with a swept wing design.

Meanwhile Loganair got under way on 1 February 1962, when Willie Logan acquired the air taxi company with its chief pilot, Duncan McIntosh, and other staff. The years before the arrival of the first Britten-Norman Islander in 1967 were particularly challenging, flying two five-seater Piper Aztecs on a variety of charter and air taxi work. The death of Willie Logan in 1966 was a huge blow, after which the company restructured as a separate company, Loganair Limited.

The challenges that lay ahead for a small company were immense – coping with cash flow and capital requirements, route licencing and competition, with every kind of financial and organisational hurdle to overcome. The story of how it survived its first half-century is told by Scott Grier, who retired as chairman in September 2012 after being with the company for 36 years and coping directly with all its challenges. His book Loganair is subtitled ‘A Scottish Survivor 1962-2012’ and he pays tribute to all the people who have put such commitment into the company over the years and the great goodwill towards it throughout the Scottish Highlands.

“No other airline in the UK has operated, uninterrupted, for fifty years under its original name. In that time, around fifty Scottish-based airlines have come and gone, and if airlines serving Scotland are included, that number rises significantly.”

He summed the challenges in an interview last year with Business Insider:

“Aviation is a fragile business but it is an exciting business. It is also a very gratifying business because Loganair, I think, has been recognised as an airline that has shown huge commitment to the rural communities and the Highlands and Islands over a long period. We came close to extinction several times and we managed to get by but some of it was a close run thing.”

Today the company is in a strong situation, carrying around 600,000 passengers a year on a total of over routes across the UK, Ireland and Norway, and possessing in its staff and aircraft the resources and experience to enable it to look ahead to its next half-century with confidence and pride.