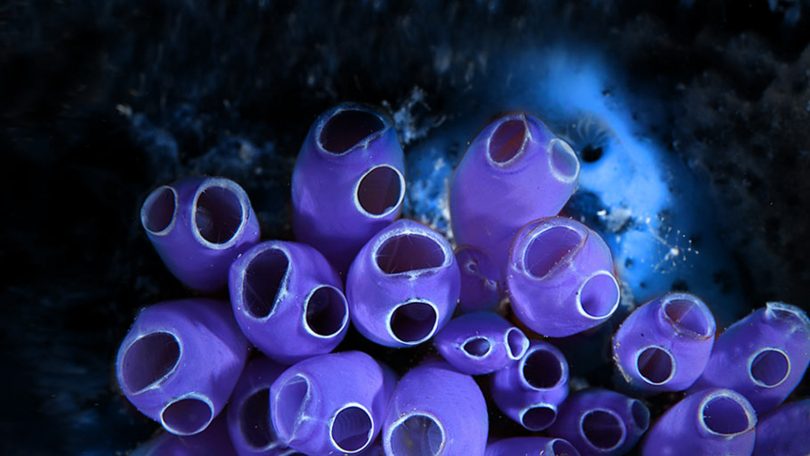 Vanadium was named after Vanadis, the Norse goddess of beauty, due to its tendency to form compounds and solutions with a wide variety of colours. Vanadium is as abundant as zinc in the earth’s crust (0.015%), and is highly resistant to corrosion and very hard. Small quantities of vanadium add strength to steel, and it has been suggested that small traces of vanadium were the key to the secrets of the remarkable qualities of traditional swords from Damascus.

But vanadium also appears to be significant in various biological situations. It’s described officially as an essential mineral or trace element in human physiology, and known to be of essential importance in some biological processes.

These fascinating creatures called Ascidians (sea-squirts) accumulate vanadium from the surrounding sea and concentrate it, from a thousand-fold to a million-fold. Why they do this and how they use vanadium biologically is still pretty much a mystery. It appears to undergo a biological change from one form V(5+) to another V(3+), possibly by pigments called tunichromes for storage in specialised blood cells in very acidic conditions.

Vanadium-binding metallo-proteins (vanabins) found in the blood of the sea-squirts are assumed to be involved in the transport of oxygen, although so far no scientific evidence is available to substantiate this. The iron in our own red blood cells transports oxygen around our bodies. Could it be that the sea-squirts use vanadium in a similar way? It’s a question that hasn’t been answered yet.

The Amanita mushroom is another example of an organism containing unusually high levels of vanadium, with concentrations of nearly 400 parts per million being observed in some species.

A particular vanadium compound was isolated in 1972 and given the name amavadin (or amavadine). Identification of the organic link binding the vanadium in amavadin was revealed through IR (Infra-red Spectroscopy) and EPR (Electron Paramagnetic Resonance) analysis, although initially an error was made in determining the actual structure. Again, the role of vanadium in this particular mushroom is unknown, but it’s thought perhaps to be associated with a defence mechanism.

The discovery of the role of vanadium as an insulin mimic in 1979 increased scientific interest in this biologically relevant metal. Insulin regulates the levels of glucose in the blood, and a shortage of insulin leads to diabetes. An insulin mimic is a substance that can have some of the effects of insulin itself and thereby alleviate some, or all, of the symptoms of diabetes.

A number of vanadium compounds (vanadate, vanadyl sulfate, metavanadate) have insulin-mimicking actions, although the reasons for this are not quite clear. One possibility is that vanadium can behave chemically a little like phosphorus – both can form compounds with several other atoms in a multiple bond. So a vanadate may in some situations act as an analogue of a phosphate, one of these situations being in the role of phosphates in the insulin molecule. There is discussion over whether it’s vanadium in its (5+) form, or (4+) form (or both), that’s responsible for the bioactivity as an insulin mimic.

More recently, complexes of vanadium (V4+) have been shown to be physiologically stable as a new class of anti-HIV agents. As potential therapeutics, vanadium complexes are possible anticancer and antidiabetic agents, and there is growing awareness in their antiviral properties. Vanadium complexes now offer new possibilities for the design of antivirals against HIV.

Due to the pioneering work by many groups we now have a better understanding of the solution chemistry, coordination chemistry and bioinorganic chemistry of this intriguing element – vanadium. The fact that the addition of vanadium (and perhaps other metal ions) can change the action of a protein may have implications for how vanadium compounds affect biological systems. Only time will tell if this metal will start to play a more prominent part in our lives.