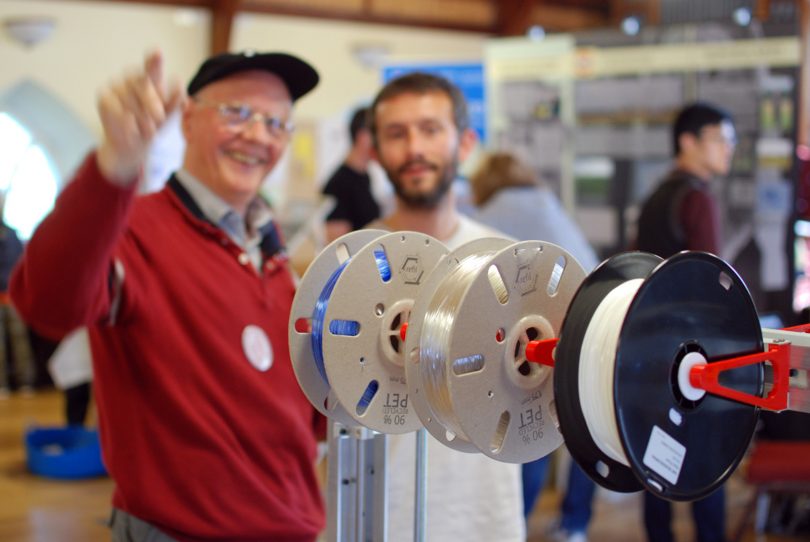 It is a stormy November night in Moray, but a group of enthusiasts are carrying boxes of equipment and heads full of stories into the Findhorn Village Centre, unperturbed by the raging elements.

This is a group of people of all ages and skills which meets once a month to share ideas and explore the wonders and possibilities of modern technology. It’s called the T-Exchange – with T for technology and also for the tea which from time to time accompanies discussion.

It is by no means the only such group. There are others – four in Scotland, 56 in England, 150 in Germany, but by far the largest number of these so-called “maker spaces” are in North America where the excitement has caught on in a big way.

But what exactly is it that has got them all fired up? Well, there is a whole range of things really from design programmes to electronics and robotics, but perhaps the most exciting of all is 3D printing or additive manufacturing.

And it is this form of manufacturing which holds the biggest potential for rural communities and the spare parts industry in particular, in fact it is being hailed as the Third Industrial Revolution.

The possibilities are endless, limited seemingly only by the imagination and as Bill Graham from the T-Exchange explains, it is also efficient, cost-effective and can soon be readied for use.

Broken parts and lost parts can be designed on the computer, using a program called Sketchup, from photographs and measurements and then made on the 3D printer. At the T-Exchange, they even have a 3D printer which has itself been manufactured by 3D printing.

“In a sense the parts are breeding themselves,” says Bill.

Seals and spools and pulleys

But from an everyday point of view 3D printing can also come to the rescue of crafts people, motorbike enthusiasts, sailors and musicians, to take a quick cross-section of the parts Bill has spread out on the table in front of him.

These are spools for plastic for the 3D printer. We can make our own rather than buying them. This is a model of Nelson’s Tower in Forres which is a memorial to the Battle of Trafalgar. We are going to make these and sell them to the tourists.”

Then again, sometimes people just turn up and say “fix this”, like the woman who lost a number of pulleys for her quilting machine during house moving and was able to get them replaced by 3D printing them from photographs.

Or the vintage motorbike enthusiast who broke the seal of his oil pump and couldn’t glue it back together again. The part was modelled and printed in plastic to make sure of the fit and then the files were emailed to the south of England to be printed in metal.

Then there is the yachtsman who lost the handle for his water tank and not only got a new one printed but also a spare, just in case.

The list is endless – from little fiddly bits for toys that would normally never be replaced, to nylon gears used in food processing machinery which would normally cost about £50 a piece made in the traditional manner by injection moulding, but with a 3D printer can cost as little as 35 to 40 pence.

Other parts which would normally come as a complete unit can now be made separately, further reducing costs and waste.

Another T-Exchange enthusiast, Mark Dammer, has a friend who plays an English concertina which is more than 100 years old. As you might imagine, spare parts for such an instrument would be rare, specialised and costly, so when one of the buttons broke inside the concertina, they were able to create a replacement on the computer and have it 3D-printed, along with a number of spares, quickly and cheaply.

Reminiscent of the Star Trek replicator, it is possible to reproduce almost anything with a 3D printer from guns and jewellery to aircraft engine and washing machine parts, and even human organs, using a person’s own cells.

Although it may seem like a machine out of the latest science fiction novel, it is in fact a quickly developing technology which is beginning to completely revolutionise our whole manufacturing process.

For island groups such as Orkney the implications are more auspicious still. Imagine your washing machine breaks down on a Friday night – with a 3D printer you can have a replacement part made right away. What a saving in time and delivery costs!

It is a move away from mass production to customisable one-off production which can be adjusted to suit every individual need.

Just last year a 3D-printed robotic hand, that can be made faster and more cheaply than current alternatives, was chosen as the UK winner of the James Dyson award.

Made by the company Open Bionics, the Bristol-raised creator of the project says he can 3D-scan an amputee and build them a custom-fitted socket and hand in less than two days.

Proponents of the technology say it has the ability to change medicine, with bioprinters actually printing human tissue for pharmaceutical testing and eventually being able to reproduce entire organs and bones.

Architecture and construction are also changing, with the quick and inexpensive creation of 3D-printed models of complex architectural drawings.

Going even a few steps further ahead, massive 3D printers are currently working on concrete structures with the goal of someday creating entire buildings with a 3D printer.

Art too will have new possibilities. No longer will it be necessary to handcraft objects, simply draw a design and have the object printed off.

Archaeologists also will be able to 3D-scan delicate and priceless objects and print copies of them so they can be handled without fear of breakage.

Bill says it is also a virtually zero-waste process which uses only and exactly the required amount of material.

The 3D process works to build the shape of an object by laying down successive thin layers of material that bond each to the other,” he says.

By far the most common 3D printer at present uses filament deposition of various materials, but plastics in particular.”

However, some 3D printers also use metals such as titanium, chrome, gold, silver and other substances such as ceramic pastes, concrete and even molten glass.

“One of the snags of current 3D filament deposition printers is that they are inherently slow,” says Bill.

The computing power required is not only incredibly cheap, but also extremely fast, so a lot of effort is going into making high flow-rate extruders, and low inertia mechanisms to reduce printing times.”

See them in action

While all the talk about 3D printing is going on, the rest of the room in the Village Centre is abuzz with conversation – ideas being suggested and expanded, problems and snags being solved, robotic machines scurrying about the floor, partially-assembled computer boards and circuits on tables with instructions for children to complete.

But despite this, the T-Exchange enthusiasts say they want to do more to share the opportunities. They would like to see more people coming to join them in exploring technology. They would particularly like to welcome more women and children in the group, sharing and exploring ideas, encouraging design and creativity.

So if you want an inspiring Friday night out as a family, why not pop along to the T-Exchange at the Findhorn Community Centre on the third Friday of the month or get in touch with Bill and ask for the nearest maker space to you.