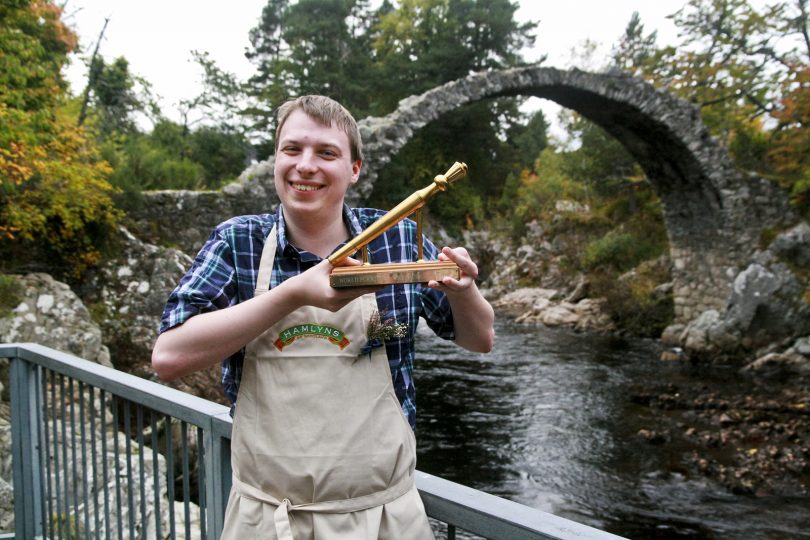 Just weeks before winning the Golden Spurtle at the World Championships in Carrbridge last September, radio astronomer Simon successfully submitted his PhD thesis to the University of Manchester.

His interest in space developed at an early age through visits with his parents to the radio observatory at Jodrell Bank.

That’s what inspired me to take a physics degree with a slant towards astrophysics. I decided to follow this by doing a PhD in astrophysics because I really enjoyed the subject as well as the practical and research style component of the undergraduate degree,” he says.

And while he doesn’t necessarily see stars in his pinhead oatmeal, he does believe that scientific discipline comes into play when producing the perfect bowl of porridge.

With only three ingredients to bring together – oatmeal, salt and water – it is vitally important to get the combination spot-on and this, according to Simon, is achieved in true scientific method by tweaking just one ingredient at a time.

Given that you only use three ingredients, it is surprising just how much variation there can be in consistency, texture and taste,” he says.

This is true not only of different porridge-makers but also in the porridge made by an individual. The old saying of ‘practice makes perfect’ really is one of the skills of porridge-making.

So what actually are pulsars, the subject of his research?

They are the super-dense remnants left over after certain kinds of supernova,” says Simon.

They rotate rapidly (anything from once every eight seconds to about a thousand times per second). As they rotate they emit electromagnetic radiation (predominantly radio waves and gamma-rays) in beams which rotate with the pulsar.

If the beam passes across the Earth our telescopes see a regular flash, in the same way that a lighthouse appears to flash.”

It was seven years ago, when Simon first stumbled upon an entry form for the World Porridge Making Championships.

I thought: I can do that. How hard can that be?” Until that time he had only ever made porridge with rolled oats.

It turned out to be a lot more difficult than I thought! The main reason for that is there’s much more skill involved when using oatmeal.

With real oatmeal the consistency and texture of the finished porridge is much more sensitive to the details of the recipe and more or less every detail has an effect, from the ratio of oats to water, to whether the oats have been soaked overnight and even the hardness of the water you use.

This makes the competition interesting as there are a wide variety of porridges on offer, but also makes it easier to slip up. Rolled oats are more forgiving.”

Simon got into radio astronomy because astrophysics at the University of Manchester features this strongly, through the various radio telescopes at Jodrell Bank.

Of course there are researchers who work at other wavelengths, but the radio stuff is most prevalent.

These results give clues to the big open question of how the emission is generated.”

After submitting his thesis, he set about perfecting his porridge-making skills and headed off to Carrbridge.

It is something he has done every year, claiming the Golden Spurtle award last September against stiff competition from a Finnish biochemist, a Swedish doctor, a Norwegian museum manager, a Swedish youth hostel owner, a Swiss miller, a South African chef, an American personal assistant, a Czech small business owner, as well as competitors from across the UK.

Judging the championships was Neil Mugg, Head Pastry Chef at the Gleneagles Hotel, Masterchef Colin Bussey, who has 34 years experience in the food industry including the Savoy and Gleneagles, along with guest judges Ron MacKenna, restaurant critic at The Herald, and Jonathan Engels of Crossbill Gin in Aviemore.

It is, says Simon, a truly international event and competition is stiff, but friendly, and that is what keeps him going back.

They make a great weekend of it. I have met lots of interesting and nice people. It’s just a lovely atmosphere.”

And yes, he will be returning this October to defend his title by producing a bowl of his perfect creamy porridge.

Porridge made with oatmeal has a stronger oaty flavour than rolled oats and a lot of people comment on it having a slightly ‘nutty’ flavour.”

Simon uses Mornflake oatmeal which mostly comes from Cheshire. “In fact one of the suppliers is a farm only a couple of miles from where I buy the oats.”

But does he maintain competition standards all year or slip back to his rolled oat ways?

I use oatmeal when I have time, although if I want porridge in the morning before I head out somewhere I’ll generally just put some rolled oats and milk in the microwave for the speed.

Personally I find rolled oats with water a bit bland, which is why I use milk in that situation and that is where most of the flavour comes from. But oatmeal porridge definitely tastes better!”

I like to think my friends like all my cakes and biscuits, but a firm favourite is my caramel shortbread. That always goes down a treat, even if I do say so myself!”

He will soon be starting a new job in scientific consultancy which he says will use the same skills as doing astrophysics research but has a much broader scope.

For his Orkney presentation, he will combining both of his interest, discussing with food writer Liz Ashworth how to make a perfect pot of porridge, and explaining to her while stirring the porridge pot about pulsars and how their study can give clues to the key questions about the nature of the universe.