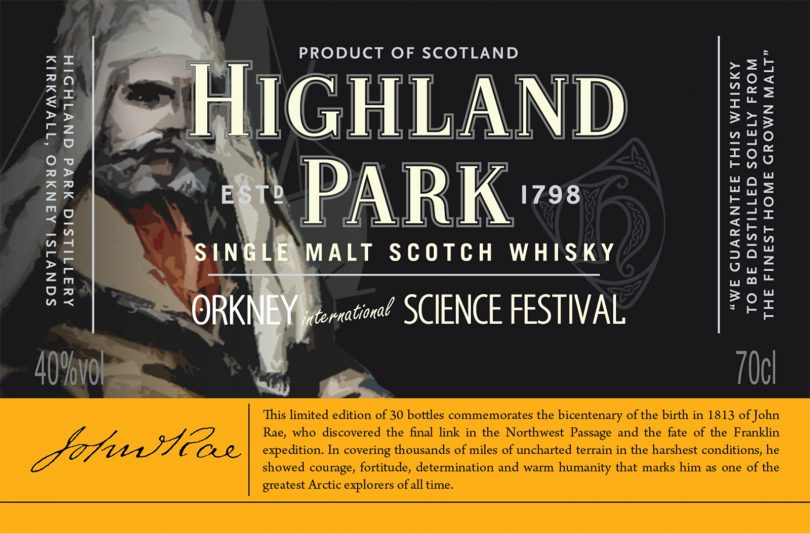 Talks on Rae have been a frequent feature of the Festival since its outset, and for this year’s events Highland Park provided support through a limited edition of 30 bottles, given to the Festival for special donations.

John Rae was one of the greatest Orcadians of all time,” said Graham Manson, Distillery Manager at Highland Park, “and someone who should be acknowledged nationally and internationally for his ground breaking exploration. We are delighted to be able to support the Festival through the donation of these special bottles.”

The idea for the bottle came from one of the distillery’s own staff, Davie Reid, who worked in the warehouse from 1998 until his retirement in 2007.

It came about from a discussion one evening with a good friend, Colin Bullen,” he says. “He told me how John Rae was the only Arctic explorer who had not been properly recognised and we talked about his achievements, the remarkable distances that he could travel, and how he learned from the local people – how he learned the art of survival in that environment. The more we talked, the more I wanted to read more about him, and the more I read, the more engrossed I got. We both felt that something should be done, and I put the idea to the company, and I was so pleased when they decided to take it forward.”

John Rae, born in Orkney on 30 September 1813, solved the two great mysteries of 19th-century Arctic exploration – the fate of the Franklin expedition and the final link in the Northwest Passage. He led a series of searches for Franklin and his men, through territory where no European had travelled before, journeying for long distances through the harshest conditions.

His ability to cope with the harsh Arctic climate was remarkable. He would walk on snowshoes fifty miles and more in a day, travelling when needed through darkness and snowstorms. He made long journeys, going on one occasion over a thousand miles on foot, and at another time close to 1,400 miles by small boat, during which time he charted over 600 miles of unexplored coastline.

He could paddle a kayak for long distances, through river rapids and amongst broken sea ice, and once did so while soaked to the skin, with his wet clothes and his moccasins frozen hard.

Part of John Rae’s ability to survive came from his time as a small boy in Orkney, learning to shoot before he was in his teens, and fishing and sailing a boat in all weathers. Another key factor was his readiness to learn from the native and apply their techniques, from clothing to igloo-building, and early in his career he became the first European to winter in the High Arctic.

His report that the Franklin expedition had ended in disaster was not well received in Victorian England and a campaign against him was launched by Lady Franklin. As a result, his achievements did not get their full recognition, and were sometimes dismissed and at other times incorrectly attributed to others.