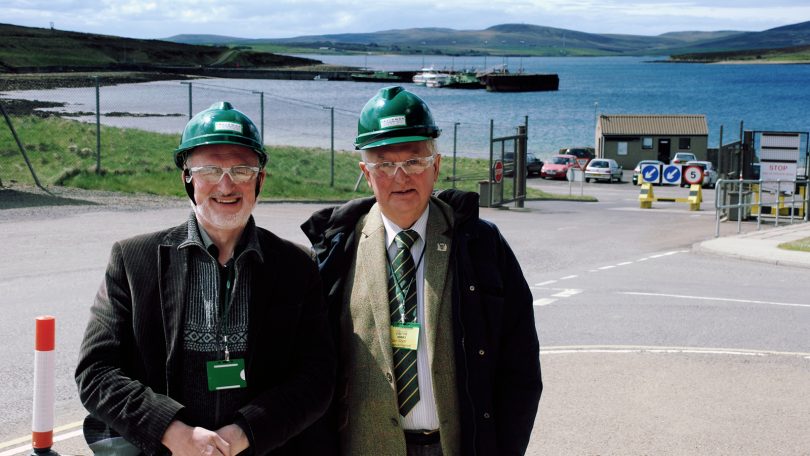 Eoin Scott, the chairman of Orkney Science Festival, who died on 5 June 2013, was someone who was at the very heart of Orkney life, with his farm and his family.

The old township of Redland, much of which forms the present-day farm, has a long history. It was described in the book Reminiscences of an Orkney Parish by John Firth, born in the house of Estaben. He wrote about the land, about the peat moss with remnants of ancient trees, the hill with its loch, and the water flowing into the Burn of Redland – places where Eoin would enjoy taking visitors.

The land and the sea

Eoin had a strong farming background on both sides of his family, through his father John and his mother Dora who was one of the Fletts of Kingshouse in Harray.

But there was also the call of the sea, with two great seafarers in the family. An uncle by marriage was Captain John Hourie, who ran the South Isles shipping service. A family great-uncle was Captain David Peace, one of the very last of the men who sailed on tea clippers around Cape Horn.

Further, through Dora and the Fletts of Kingshouse there were family links to Eric Linklater and George Mackay Brown. So for Eoin, born in the house of Redland in the early hours of the morning of 12 June 1942, there was a wealth of stories of travel and adventure and people, which he carried with him all his life.

The bank and the farm

Eoin was one of a family of three, with his sisters Dorothy and Margaret. He went to the Firth School and then on to Stromness Academy. When he was 14, he won an award to spend some weeks at the former Sutherland Technical School in Golspie.

On leaving school, he joined the former National Commercial Bank in Stromness (the Royal Bank today). He was promoted to the Thurso branch and for a time was in charge at Castletown. He enjoyed his time in Caithness, but at the weekends he would look across the water to Orkney and think of all the things he could be doing.

His father had farmed Redland as a tenant, and in 1964 came the opportunity to buy it outright. So Eoin came back to Orkney to join John in building up Redland into one of the prime farms in the West Mainland.

They carried out drainage schemes and put in slatted courts. They also carried out big projects for which there were no grants, where the outcome was simply the satisfaction in doing something worthwhile. Up on the hill, they took a dragline digger to link ponds into the loch, for red-throated divers. They built islands for nesting undisturbed, and one of the pleasures of an evening’s walk on the hill with Eoin was the sound of the birds coming back home for the night, with their wings beating and their haunting call.

Further down the hill, he felt that trees would suit the sides of the Burn of Redland. The Department of Agriculture said trees would never grow there and refused a shelter-belt grant; so Eoin went ahead and did it anyway. It’s now a fine woodland, with the trees reaching up the hillside – ash and rowan, whitebeam and sycamore, hornbeam and horse chestnut, lime and maple, and a eucalyptus too. It provides a wonderful shelter for migrant birds.

With the Young Farmers

Eoin had other work as well. He clerked at the Stromness Mart on busy days, and sometimes at Kirkwall too. Another benefit of being back home was membership of the Harray Young Farmers. He became treasurer and then chairman, and he was a member of a Harray speechmaking team that went to Aberdeen and won the national cup, along with Terry Coghill, Jackie Fraser and Tom Sinclair. The Young Farmers Clubs bring people together to make friendships for life.

Eoin was involved in the development of the annual concert competition for the D G Spence Challenge Cup, and he went on various Young Farmers trips, including Norway and Canada.

Before he set off for Canada, an old lady in Stromness mentioned two brothers of hers who she thought owned a couple of boats on a lake out there. It sounded a little like leisure boats in a park, but when Eoin tracked them down, the location was in fact one of the Great Lakes, and the boats were part of a small fleet of powerful tugs moving cargoes of logs.

In Canada he was interviewed at the local radio station, and on leaving the building was met at the door by a police car and told that he was to be taken to the police station right away. Eoin wondered what this might mean, but found that the chief of police was a man of Orcadian descent, who had heard the programme and wanted to meet up with him and exchange news.

And the radio station itself is part of the story. It was a very small station, serving the isolated communities spread across the vast prairies of Saskatchewan. It was informal and friendly – and very efficient in providing information and linking people. When he got back to Orkney, Eoin gave a detailed description to Jo Grimond, pointing out the potential benefits.

At the time, local radio stations in Britain had staffs of twenty and more, operating on strict demarcation lines. But then an old friend of Jo Grimond, Alastair Hetherington, was appointed Controller of BBC Scotland.

He recognised the potential of the idea, and in May 1977 Radio Orkney and Radio Shetland became Britain’s first community radio stations. Eoin was asked to be the chairman of the Radio Orkney Advisory Committee, and then to join other national BBC committees in Scotland and in London.

Eoin was an ideal chairman for any organisation. As well as speaking and chairing a meeting so well, he had a deep belief in fairness, a logical and open mind, and a determination to always do what was right; and his guidance and judgment were highly valued.

He was session clerk for the parish of Firth, and later for the united parishes with Evie and Rendall, and if needed, he could conduct a service. He had a deep religious faith, combined with an interest in learning more about the unknown.

He had a lifelong interest in Orkney’s past and became chairman of Orkney Archaeological Society. He was delighted in recent days to follow the progress of the current dig on Redland, on a site that he had discovered.

Twenty years ago, when the archaeologist Caroline Wickham-Jones was seeking evidence for the earliest people in Orkney, long before the Neolithic and the time of Skara Brae and Maeshowe, she went to see Eoin, and I can remember the moment at Redland when he brought out a box of seven flints which he had found when ploughing and carefully preserved. The first one or two were Neolithic; and then came one that Caroline could identify as specifically Mesolithic, from the hunter-gathering period – and thus several thousand years older than anything before.

When Eoin was quite young, he discovered, built into the wall of a collapsed milldam at Redland, a carved but very weathered stone, with a coat of arms. The artist Stanley Cursiter asked him to make a rubbing of the stone which was forwarded to the Lord Lyon in Edinburgh. The coat of arms was formally identified and awarded to Eoin and his family.

It turned out to belong to a man called David Walter Scott, from the Scottish Borders, sent into exile in the year 1526 for border raiding. He had been exiled to the Netherlands in a small sailing-boat and taken a wrong direction and been shipwrecked on Sanday.

I should add that in recent times some people who have studied the period have suggested that there may be a connection with Sir David Scott of Branxholme and Buccleuch, a Scottish nobleman and a noted Border reiver, who fought at Flodden and was knighted on the battlefield, and later sought to rescue the young king James V from the clutches of another powerful family. For this he was exiled by his rivals in late 1526, but eventually was able to return, and the king, by now escaped, never forgot his loyalty. If so, this would be a fine ancestor for any family to have.

Eoin was one of a small group brought together by Josh Gourlay at Orkney Tourist Board to found the Orkney Science Festival, and as chairman for over twenty years he did so much to make the Festival a success. He chaired and managed events, and looked after visiting speakers, taking them on tours and giving them insights into Orkney. In this way he built up international links, and was invited to speak about Orkney in various countries.

Eoin loved to travel, and wherever he went he represented Orkney in the finest possible way. He always seemed to meet interesting people. Once in London, in reply to a question, he described himself as ‘just a farmer’. A man who had overheard introduced himself as ‘just a farmer’ as well. After a good discussion about farming, the man, who came from Spain, invited Eoin to visit his farm.

Eoin was met at the airport by the Spanish farmer – with a very luxurious car, driven by a chauffeur in uniform. On arriving at the farm and entering a very large mansion with several paintings by Spanish masters on the walls, Eoin discovered that his new friend was the biggest landowner in the area, and one of the Spanish aristocracy.

One of the people asking for Eoin recently was an American astronaut, a lady who he had met in Slovenia; and the comments of three other ladies seem to sum him up so well. One said:

I remember just what a warm and wonderful personality he was. His gentle courtesy and passion for the islands shone through.”

I will never forget his twinkling eyes and generous spirit, interested in everything and everyone. He certainly used his short years on earth to make a difference for good in so many ways.”

And the third one simply said:

He was an amazing person and this is how he will be remembered.”