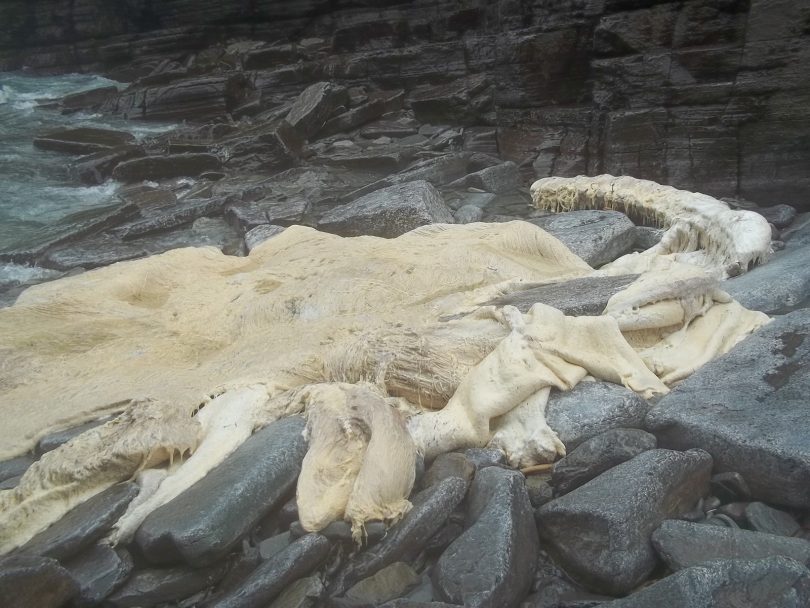 A mile or so up the coast from the farm, a whale corpse is decomposing in a ‘geo’ (the Orcadian word for a narrow inlet of water in the cliffs) and I scramble down the rocks to investigate. Colossal internal organs are scattered among the seaweed and driftwood, and the skin is spread out like a carpet over the stones. Examining the carcass, I am caught unaware by a wave, jump on top of the nine-foot spine to escape, but still get wellies full of sea water and rotting whale slime.

Today a beached whale is somewhere between a curiosity and a tragedy but not so long ago was a bonanza. The meat was eaten if fresh, the blubber made into oil for lamps, lubricants or the manufacture of soaps and other products, and whalebone used in construction and ladies corsets. You just had to know what you were looking for.

A few weeks ago, Dad was chatting to a beachcomber friend and asked him to name the best thing he could think of finding on the shore – “ambergris” he replied. Ambergris is a rare and highly valuable substance, produced in the stomachs of sperm whales, either vomited or excreted out, and usually found floating on the sea or washed up on shore. He described the substance – waxy, between white and grey and amber – and Dad said “oh, we’ve got some of that”. A lump of stuff fitting the description had been in the tractor shed for years, perhaps ever since my parents bought the farm more than 30 years ago.

In Moby Dick, Herman Melville’s narrator Ismael describes: “…ambergris is soft, waxy, and so highly fragrant and spicy, that it is largely used in perfumery, in pastiles, precious candles, hair-powders, and pomatum. The Turks use it in cooking, and also carry it to Mecca, for the same purpose that frankincense is carried to St. Peter’s in Rome. Some wine merchants drop a few grains into claret, to flavour it.”

We’ve been reading everything on the internet about ambergris: wondering at parfumiers’ descriptions, of a “pheremone” with “a transformative quality” that “seduces particularly feminine noses, who instinctively recognise the odour that will attract males”; reading claims that it can ‘cure Parkinsons’; watching ebay auctions where lumps have been going for $40 a gram, not much less than gold.

When my parents moved to the farm before I was born, there were whale bones around the buildings. I remember climbing up a dyke and standing on a massive vertebrae that sat on top – part wall, part animal. It has given us a link to these huge, incredible animals and encouraged the thought that our lump might be what we hope. It is now the size and shape of a naan bread or a toilet seat, although Dad remembers that it has changed shaped over the years – to fit a bucket it was chucked in, then flattening out gradually when tipped onto the byre floor. It was a piece of farmyard junk that could easily have been thrown on a bonfire or midden.

Our fortune (of just how much? £50,000? £100,000?) could have been sitting on the floor of the shed all this time, the “cash in the attic” people dream of. The answer to our financial problems in a lump of whale puke! Ishmael again: “Who would think, then, that such fine ladies and gentlemen should regale themselves with an essence found in the inglorious bowels of a sick whale!”

We have been performing experiments – melting and poking fragments of our treasure, looking for the cuttlefish beaks that are a sure sign of a whale’s digestion. Insertion of a red hot needle produces a satisfying puff of white smoke but while there is some kind of smell it’s not quite the “peculiar odor that is at once sweet, earthy, marine, and animalic” we’ve read about. We are also concerned that the dogs and rats on the farm have never tried to eat it. Results are so far inconclusive.

I’ve been fighting to avoid falling into the depression that is apparently common in the first year of sobriety, missing some of the chaos and unpredictability of my old life. But alcohol wasn’t working for me anymore: I remember being so drunk I was falling down, but feeling I’d barely scratched the surface, buying shots at the bar, huge emptiness. In the end, I was chasing a promise that never delivered and now I’m looking to the surprises of nature to stir my imagination.

The next step is to send a small sample of our ‘ambergris’ off for testing and verification – to one of the perfume houses in France or New Zealand traders. Perhaps we’re stalling to keep the daydreams of multiplying bank accounts and new tractors alive, in the knowledge that if something seems too good to be true then it probably is? Soon, all we might have is a lump of worthless wax (melted down horse hooves or bones is an alternative explanation) but for now, it’s a thing of wonder and riches – magic washed up by the sea, thanks to the dyspepsia of a whale.