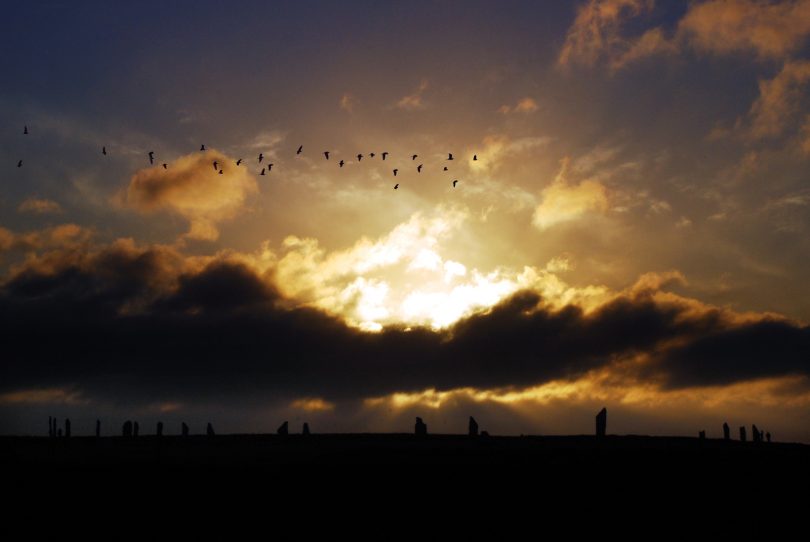 It was sometime in the spring I noticed this, and as on the longest day the sun sets in the opposite direction to where it rises on the shortest day, it would be interesting to see if my idea was correct. The days lengthened, and in the old saying, ‘the sun sets a cock stride north every day’. I kept watch on evenings when the sun was visible as it set, but disappointment: on the longest day the sun was down before it reached the sight line through the stone. The hills got in the way and the sun was out of sight before it reached the true horizon.

The hills to the south-east are higher, and six months later as the shortest day approached, I began to watch again; and about a week before the shortest day the sky was clear at the horizon at sunrise, the tip of the sun appeared just marginally short of the sight line, and there was good hope that on the 21st it would be perfectly in line.

But there was about three weeks of cloudy skies and no hope of seeing the sun rise and being sure of the fact.

The alignment of the sunrise through the double stone seems to confirm that the shortest day was important when the monument was built, and this was a means of regulating the calendar. The standing stones were probably used as a gathering place to mark the occasion.

It has been said that Orcadian skies are so often cloudy that there can be no connection between the stones and the sun observations, but the opposite is true. There is no definite weather change to indicate spring has arrived, so even if the exact day could not be observed, it could still be said when the day had passed.

There is a slight difference in the sunrise now and when the standing stones were put up. The difference is less than a degree, less than the width of your thumb at arm’s length, a difference that can be measured with modern instruments but can be ignored while surveying with the old-fashioned eyeball.

The marking of the shortest day, the day that marks the turning point when the days lengthen and there is hope of renewed life in the ground, implies a great deal of study of the sun’s path through the year, that it went so far and then returned.

The size of the monument indicates that when it was built there were scholars to design and leaders able to finance the building, probably imposing taxes for the salary of the keeper.

It is known that the Orcadians in Neolithic times grew barley, and the summer in Orkney is long enough to grow and ripen this crop, if you sow it at the proper time. If it is sown late it can mean an unripe crop at harvest time and disaster for the community. When communities were small and self-contained they probably each had their own mark to show when it was time to sow. A stone viewed from the house door, or a notch on the horizon, would have been sufficient. At that time every hill mark of importance would have its own name with no need of a standing stone to mark it. The time to sow the crop was much more important than the academic marking of the shortest day.

In historic times it was usual to have the year start about the start of the growing season and not at some date dictated by scholars. In Scotland, New Year’s Day was the 25th of March until 1599 when King James VI decreed that it should change to what we know today. (He decided that Scotland should come into line with ‘other well governt commonwealths’.) On a Norwegian staff calendar summer began on April 14th and St Magnus Day was April 16th when traditionally ‘spring work started’.

There is only one double stone in the group to give a sight line, not to be confused with one nearby that is split; and whether by accident or design it lines up on sunrise on the shortest day. We can’t say if there was any celebration to mark the event.

It has been said that the enclosed area at a henge monument gives an idea as to how many people gathered there. Orkney must have been well populated if this is true.

Peter Leith's family have farmed in Stenness for several centuries, with each generation passing on to the next a wealth of information about local history and tradition. Peter himself had a lifelong interest in all aspects of Orkney's history and environment, making this knowledge more widely available through numerous talks, papers and demonstrations of craft skills. At the age of 90, he became a Fellow of the Society of Antiquaries of Scotland, and continued to be active in writing and researching until his death in the summer of 2021, a few weeks ahead of his 94th birthday.