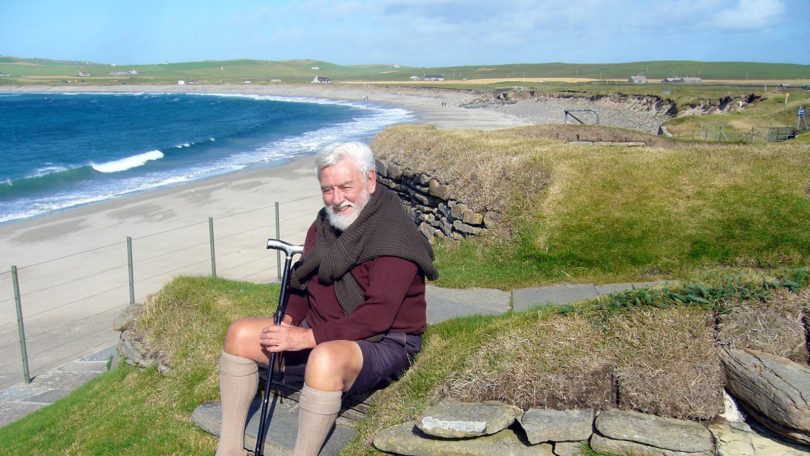 He was christened Robert James, but everyone called him Sam. He’d grown up in Preston, and arrived at Shrewsbury School – founded in 1522 – with a Lancashire accent. And “Sam, Sam, pick oop tha’ musket,” was the officer’s order in the popular Stanley Holloway monologue about the independently-minded soldier Sam Small.

He turned out to be well able to make his own mind up about who to listen to. As one of the most eminent biologists of his generation, in a field where religion could come under fire, he held firm to his own beliefs and in several books argued the case for the compatibility of science and religion. His many awards included the 1996 Templeton UK Award for his “sustained advocacy of the Christian faith in the world of science”.

His achievements in biology were immense. University College London, where he had been professor of genetics until retirement in 2000, described him as “a massive figure in evolutionary and ecological genetics, biodiversity and conservation biology”.

It was at UCL that he spent most of his career, from his PhD onwards. But first, he had at Shrewsbury an example to follow in its former pupil Charles Darwin. At Cambridge he was taught by another famous name in biology, the geneticist and statistician R. A. Fisher.

His lifelong interest in field biology developed to the full at UCL, where his PhD supervisor was Hans Grüneberg, often called “the father of mouse genetics”.  Grüneberg realised that mice were the ideal model for studying the inheritance of human genetic disorders.

The importance of studying them in the wild became clear to Sam as a result of Bernard Kettlewell’s work at Oxford on peppered moths. This was the now well-known study showing how darker-coloured moths predominated on trees darkened by industrial pollution; the better concealment from predators showed natural selection in practice.

It was Kettlewell, Sam later wrote, “who first taught me to understand and investigate genetical problems in natural populations, and to whom I shall always remain grateful for demonstrating so clearly that true science is vastly greater than the absurd reductionism that too often goes on in laboratories.”

And for fieldwork, he turned to islands in particular. Here he could study variation within populations. He visited many islands, from the northern isles to the South Shetlands, and gathered a massive amount of genetic data. Ecological genetics had long been shaped around snails and insects, but Sam focused mainly on mammals – voles, field mice, and especially house mice. He studied subtle differences, such as the presence or absence of a very small bone in the ear.

Some fascinating insights emerged. The Scottish island field mice had been thought to be relicts from ancient times, but Sam showed that various islands had a genetic similarity with field mice in Norway – the result, he suggested, of them travelling on Norse ships in the Viking Age.

Later studies of house mice showed the same pattern. Elsewhere in the British Isles, he found, the pattern was different, but there were some similarities with mice in Germany, a possible marker of Iron Age trade links.

What took him first to Orkney, however, was not mice but bones. In 1958 he had married Caroline Elliott, whose career was in clinical genetics. In the late 1960s she became involved with work on human bones for Don Brothwell’s group from York who were excavating the Norse period chapel and cemetery at Newark Bay, Deerness. So the whole family went and that was the start of a lifelong Orkney connection.

A later collaboration with Don Brothwell and other archaeologists, anthropologists, geneticists and local historians resulted in the book The People of Orkney.

He used to go to Fara in particular for mice, and sometimes he would take their son Andrew with him, along with one of his research students. Transport to and from the island was organised by Marcus Hewison from Westray, who had sheep on Fara. Those were the days before mobile phones, and so when they ready to come off, they had to signal with a bonfire.

The sands of Rackwick Bay

Sam developed a deep love of everything about Orkney – the sight of diving gannets, the cliffs of Yesnaby (of which he had a painting), and Rackwick Bay where the family went on their first visit. They never forgot the experience: a day of mist, with the sandy beach and the towering cliffs – “Really magical,” Caroline recalls, “and when later on our grandchildren came there, they felt the same.”

Sam found his feelings for Orkney’s land and sea to be so well expressed by its writers, particularly in Robert Rendall’s poems and his book Orkney Shore. “Light and colour spill from its pages,” he wrote, “and in its own way it is a simple testament to the beauty of the Orkney landscape and the people who inhabit it.”

And he got to know many people in Orkney and form lifelong friendships. Some of his earliest contacts were with leading members of Orkney Field Club, among them Elaine Bullard. He formed a deep admiration for the quality of the work carried out by the Club and the county recorders, and for Orkney’s long line of outstanding naturalists.

The book The Natural History of Orkney in the Collins New Naturalist series was produced in collaboration with the Club, with members contributing key chapters and Sam synthesising the material into an overall format. Later he reworked it into Orkney Nature, in which he brought out further his feelings for the island in a book “for those who love sky and sea, nature in its fullness, solitude and plenitude”.

Out of many discussions with Elaine Bullard about the work of local biological recording came a short paper in the 1999 Field Club Bulletin, in the Club’s 40th anniversary year, that was nothing short of a clarion call for recognition of the role of local naturalists in the development of science.

Sam, who himself had recognised the importance of fieldwork for researchers, made it clear that biology develops through a partnership of professionals and local specialists who knew their own terrain.

“Professionals are trained to fit details into general patterns, to mould understanding in the light of new knowledge. They may collect information for themselves, but for much of the time they depend on the data provided by others. And that is where the amateur comes in: he or she will almost certainly know the local area better than an outsider, however learned or eminent the outsider may be; it is the person on the spot who may sense change, record new species, document the loss of or decline of long-established forms.”

He gave strong support to the work to establish an Orkney Biodiversity Records Centre. He had long been concerned about the situation nationally, and in 1985, in his final year as president of the Linnean Society, he brought biologists together to draw up a new national blueprint for coordinating biological recording, which led to the establishment of the National Biodiversity Network of today.

“Without Sam’s commitment to the cause,” says one of those most involved, “the NBN would never have been conceived.”

The list of his achievements, his books, his papers, and his awards is immense, and even those who worked with him often knew only a fraction as he never used up time to speak about himself when there was always a new challenge to be met. In the last Christmas card he was able to write, with his health failing, he urged Orkney friends to support action on stoats. The Church Times obituary summed up his warmth and humanity: “Sam wore his achievements lightly, and will be remembered for his smile and genuine interest in people.”

“My love of natural history has been steady and ardent,” wrote Charles Darwin in his autobiography, and indeed the same could be said of Sam, who brought to his work a joy in the natural world and its study and a great commitment to helping others share it.