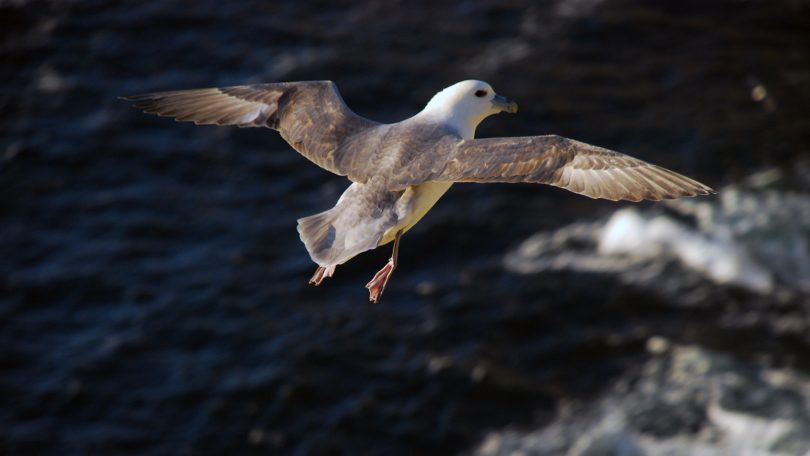 Every day I walk along the beach, past the arctic terns’ colony. They have a sentry posted near the five-barred gate which leads out on to the shore, and almost instantly the squadrons take off and begin their attack, swooping and dive-bombing, and zooming in with their razor-sharp beaks. Several times they have managed to get near enough to draw blood, but it saves time to go along the shore so that it is better to risk the attack.

Once past the terns’ air base, where their chicks are just beginning to leave the hollows where they nest, the sand stretches out in a wide bay. Sometimes the sea is far out, and the wet sand is unmarked, except for ripples where the tide has ebbed, and the hoofprints of the native sheep. There are the three-toed prints of birds, casts from lugworms, and the occasional track of a seal heaving itself back into the water after basking in the sun.

When the tide is in, the seals swim along beside me, popping their heads up to see what I am doing, and turning somersaults. I usually set out with two for company, but soon there are fifteen or more.

The sheep are always munching the fresh seaweed thrown on to the sand by the tide, and they pay very little attention, lifting their heads and walking slowly away till I have passed them. There is very little drift wood at this time of year, but I did find a new rope sling which was worth picking up. The water changes colour, depending on the sky, sometimes clear and bright blue, right out to the horizon, or brilliant turquoise green. When the mist is down, and the air is full of water, the sea is a heavy grey. It glints and sparkles in the sun as it ebbs and flows, not at all like the wild seas of winter.

Coming back, I keep to the sea dyke, and the short grass below the dunes. It is longer, and slower, but warm and sheltered. Every few yards the fulmars are sitting on their solitary eggs, and spit at you if you go too near. Their fluffy offspring are plump and grey, and fun to watch as they nestle close to the wall. The fulmars are slow to take off, but once in the air their graceful flight is beautiful to watch, as they soar over the water.

In some places the dyke is incredibly high, where the sand has blown away. The labour involved in building such a monumental work is amazing, and it is at its highest, perhaps ten or twelve feet there, with holes in it to let the gales blow without hindrance. Here and there are small graves covered with turf, where a dog has been buried, and the larger mounds for cows. The stone crusher, a massive piece of industrial archaeology, rusts gently away on the shore. It has a verse inscribed in the metal, giving instructions on its maintenance.

Now that the clover is out, the scent drifts down on to the beach from the surrounding fields. Everything smells of summer, and the sea makes you want to take deep breaths, especially when the sun is on the water. The warm turf has its own fragrance, and everywhere in the short grass, there are minute flowers blooming, even in the sand. The red runners of yellow tormentil are all over the links. Some flowers are so small they are barely visible, yet delicate and perfect, deep pink and starry, or white and crimson.

Inland too, the fields are full of flowers. The sandy rigs are blue with lesser bugloss, far more than usual. Red poppies, hearts’ ease, wild violet, white ragged robin, pink and white campion, forget-me-nots, and speedwell are growing in profusion. Lady’s smock is everywhere with its pale lavender petals and sweet scent. It too must like this warm, dry weather. There is such a contrast between the seasons on the islands that we live constantly in the present, forgetting the change which comes with autumn. Summer is a time of respite, when the violence of the northern climate is tempered for a short time. The light is so bright, especially near the sea, that it makes the eyes water. It is still not really dark during the night, and dawn is around four o’clock in the morning. The birds are noisy as soon as it is light, making sure that they use every minute to feed their offspring. On these soft nights, the windows can be left open, letting in the scent of the flowers.