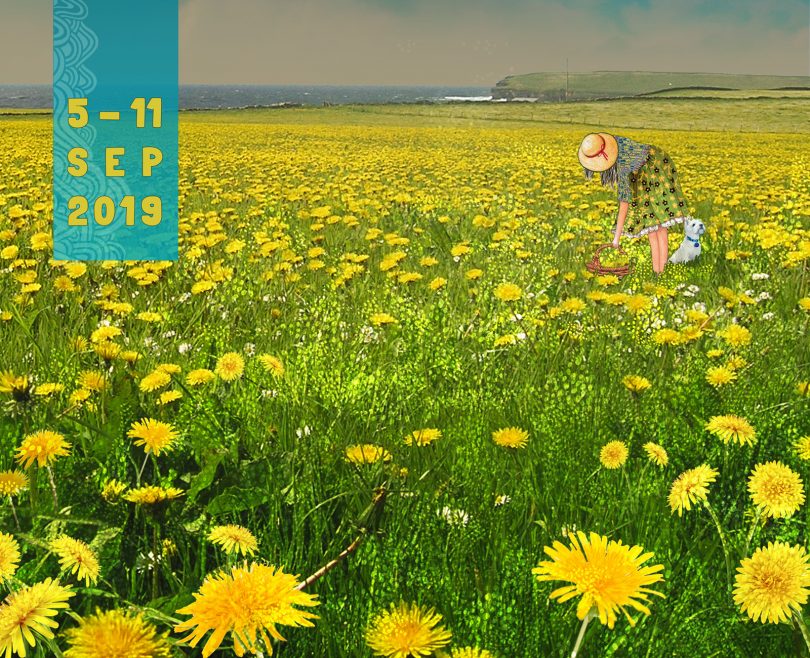 Foraging food from the wild, once standard for older generations, is now reviving, with its benefits for nutrition and exercise and the opportunity to connect to the natural world.

The Festival’s programme will be enhanced by a range of new events, including shore outings and papermaking from natural materials. There will be talks on wild food in Scandinavia, a look at the potential of seaweed for health and nutrition, and an evening of foraged food from the Neolithic.

Speakers will include Prof. Dave Goulson of the University of Sussex, a national figure in research on the decline of bumblebees, and the background of environmental damage that threatens the fate of insects and humans together. He will describe many actions which can be taken to reverse the changes.

The Festival will be opened by 20-year-old Zeki Basan, who is a glacier guide in Iceland and a wilderness instructor in Scotland. He will describe the skills of survival used in the past in Scotland and by indigenous peoples today and show short films of his solo adventures.

Zeki lives in a remote part of the Cairngorms, where the only access to the main road in winter is a 3 kilometre ski journey, and since an early age he has been used to self-reliance and exploring ways of using natural resources – such as tanning fish skins to the quality of leather.

Eva Gunnare from Swedish Lapland, will describe Arctic herbs and berries used by the Sami people. Also speaking about the uses of wild plants, from garden weeds to seaweeds, will be chef Ben Reade of Edinburgh Food Studio. He’s former head of culinary research and development at the Nordic Food Lab established by the founders of Copenhagen’s world-renowned Noma restaurant.

Orkney chef Sam Britten will be in action preparing an evening of food from the Neolithic, with Andrew Appleby providing support which will include newly made serving dishes in Neolithic style.

A climate of exploration

The foraging theme will be part of a climate of exploration in the Festival’s programme, which will also be marking the 50th anniversary of Neil Armstrong’s walk on the Moon, 50 years ago this month. There will be accounts of plant-hunting in the mountains of Turkmenistan, of the return home of the Norwegian explorer Roald Amundsen’s ship, and the search for the lost Franklin expedition.

The programme will also feature the story of the expedition to the West African island of Principe, 100 years ago, to measure the path of starlight in a total eclipse of the sun, and provide the proof that catapulted Albert Einstein to international stardom.

The full Festival programme is to be launched next week, and in the meantime the Foraging Fortnight plans are being announced across Scotland, with four other areas taking part along with Orkney – Moray, Fife, Lanarkshire, and Forth Valley and Lomond.

The Foraging Fortnight initiative has developed with funding from the Scottish Government and the EU through the LEADER programme. Its aim is to encourage people of all ages to participate in exploring the outdoors, safely and responsibly. Foraging Fortnight will run from 31 August to 15 September, with the Science Festival taking place from 5-11 September.

There is more information about the Foraging Fortnight and the Orkney events on the Science Festival website.