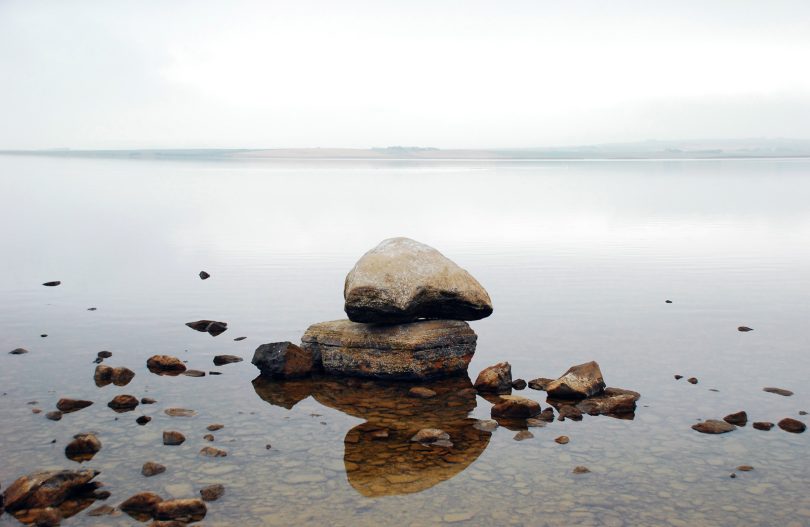 The Orkney International Science Festival is always varied in its content and far-reaching in its vision, and the recent 2022 Festival was no exception ….

Thinking about how very inclusive the OISF is got me thinking about how that word is used – ‘science’ – and what that means today and in relation to what we can see of the cultures of ancient societies. I’d say those ancient folk at the Ness of Brodgar and elsewhere had ‘science’ and a ‘scientific’ approach to many things. I went into one aspect of this, at length, here.

This reproduction of the EOASSK by Orkney artist Joan Rodwell shows the three and four asymmetry….

They had their astronomical calculations and calendars, such as this one on a kerbstone at Knowth in the Brú na Bóinne ….

There are other observatories and markers of time and the movements of the planets in other parts of the world, some as ancient as the Brú na Bóinne sites – some old, but not ancient, all doing a similar job of … marking time and place.

I don’t see why people should have a problem with the idea that time, or distance for that matter (for example, Alexander Thom’s Mesolithic Yard), should have been measured differently in the past. In Britain, the calendar has been changed in relatively recent times, and measurements weren’t even standardized until very recently. So, we can’t presume that the ancient peoples would have measured as we do.

Possibly even folk in different parts of the world measured things in different ways. They will have been likely to have focused on the main ‘markers’ or turning points in the year where they lived, and it would make most sense to take the year as between the longest and shortest day. But they wouldn’t have to have done so – there’s no reason why time and distance measurements shouldn’t have been seen very differently. Still are in some places – the ‘Maine Bushel’ and the ‘Irish Mile’ – and by that I don’t mean the interpretation of the mile given by folk when giving directions: my sister once gave me the direction “It’s a couple of miles, straight down the road.” It wasn’t – it was a lot more than a couple of miles, and the road included a fork in it – with no signpost!

I don’t see why people have a problem with the idea of different cultures having different guidelines/rules for the interpretation of time and distance – or measurement. It’s looking at what we know of the ‘science’ of these cultures in a limited way, which isn’t what ‘science’ and scientific study should be about. Good old Albert (Einstein) maintained that at the heart of science should be wonder and a willingness to change one’s view or form of exploration and expression of ideas. He maintained that any of his theories, however much work he put into them and however much the conclusions appeared to be, conclusions, the fact still stood that new discoveries could change those conclusions. That’s an important thing, isn’t it? To have the ideas, work on them, come to conclusions, but be prepared to change as new information is forthcoming. A good ‘scientific’ approach!

The division of art, science and religion is a relatively recent one and these divisions have often muddied the waters rather than helping to clear them.

Rocks and grain and clay

I also considered things like – making pigments out of rocks. That’s science. Taking some bits of un-interesting, dull coloured rock, and realising and working out how to make glowing pigments out of them. And the science of metal working, which was seen as ‘magic’ – not surprisingly as, well it is, isn’t it? Who ever first thought of taking a lump of rock, working it that way, and producing metal? And … why? Why would it occur to someone to embark on that line of exploration?

Equally, whoever first thought of taking grain, grinding it up, adding water, baking it at just the right heat to produce … bread – mainstay of the human diet.

I keep thinking of the thin line between science and alchemy. To me cookery is science, or alchemy. You take a motley set of ingredients, put them together the right way, and you have lovely food. Put them together the wrong way, and it’s yukky. It’s all to do with chemical reactions and temperature. A cheese sauce, in particular. That may all sound a bit strange, but I hope you see what I mean.

I have a vague memory of something about some experiment to do with how ancient pottery was made. Something to do with little ‘dimples’ in the base of the pots. It was worked out that these dimples changed the dispersal of temperature somehow, to improve the quality of the pottery. Presumably to improve its heat resistance for cooking. I know, I said it was a vague memory! And I can’t even dredge up where it’s from, but it was a very interesting idea. Ancient peoples had enough nous and know-how, to work that out.

Andrew Appleby – the ‘Harray Potter’ – Stephen Harrison and associates,  have done much work on the methods of producing ancient pottery …. Take a lump of clay – but it has to be the right kind of clay or it won’t work right – shape it, maybe in ways which will enhance its proposed function – heat it just right and you have useful bowls, dishes etc. Magic? – Science?

So, what is ‘science’? To me all kinds of things are science and an awful lot of things which are science can seem like magic and do seem like magic. I certainly don’t understand electricity, and my granny would have thought it was magic! And it is. But it’s science. And magic, too. ‘Science’ and ancient science are very tricksy words, and concepts, to conjure with. I’m not saying that the ancients were ‘scientists’ as the word would be used now. As I’ve said before, this was all before the big division came into being.  Maybe they were ‘priests’, shamans, metaphysicians, but I’d say they also had a very ‘scientific’ approach – as in they measured, watched, took time to consider and draw conclusions from what they observed, then acted on those conclusions – sounds like science to me!

These days physics is definitely moving towards meta-physics. Where do we make the divisions? That all came in quite recently. I see those ancient folk, the priests/shaman/whatever, as being what might be called scientists in their reasoned, measured approach and how they were prepared to take many, many years if necessary to work out what was needed. And also, at the same time, possibly spiritual leaders with a sense of wonder, akin to Albert. Part of why I have such huge respect for them. So, the whole, ‘science’ business? Well, words are just words – very useful things, but can cause more fog than clarity sometimes.

Just me, my opinion, I’d say that many of the ancient peoples had science, and real science, not limited, turning-in-on-itself science, only looking at a small area of study. Large, expansive science, the best kind! In all kinds of areas though, not just looking at the skies and planets, but observing and making use of what was around them to produce what was needed.

This could also be said to include the ‘science’ of engineering, as seen in the construction of their monuments, and things like the method of water collection in the Broch of Burroughston on Shapinsay