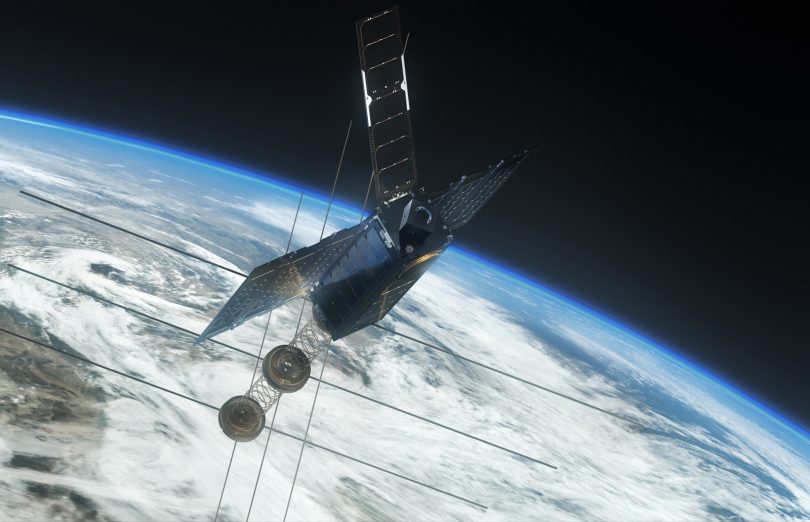 The new satellite, UKube-1, is Clyde-built. It’s been designed and built by Clyde Space at Maryhill. At one time the shipyards of the Clyde launched a quarter of the world’s marine tonnage, and now the river’s name is linked to a new field of innovation, in space – and with a new type of satellite in which the Glasgow company is a world leader.

UKube-1 is a CubeSat, a new type of modular design, based around a unit cube with a side of only 10 centimetres. It is small enough to hold in your hand, but part of the design skill is to pack into that volume a complete package of equipment to enable the satellite to gather data and transmit it down to earth. UKube-1 will consist of three such cubes linked together.

CubeSats, with their advantages of modularity, are predicted to do for satellites what PCs have done for computing. It’s now possible to buy components and assemble them as a kit, and Clyde Space already provides an online credit card purchasing system for items.

The modular CubeSat structure is highly versatile. Researchers are using it to design small satellites which can track, space junk, examine the cosmic microwave background (the so-called ‘echoes of the big bang), or hunt down new planets outside our solar system. The cheap price and versatile components are also stimulating a kind of ‘do-it-yourself’ boom in CubeSats – indeed one site providing information is called DIY Space Exploration.

Clyde Space is also expert in the design of miniature power systems for CubeSats, for which they have around 40% of the global market. Their customers include NASA, the US Air Force, and MIT.

UKube-1 will carry four payloads from different universities and organisations. One of the payloads, called FUNcube-2, features a satellite beacon which schools can receive. A satellite reception system – the FUNCube Dongle – has been designed to enable anyone to try to receive a signal from orbit. The FUNcube project – which will also involve a separate satellite of its own – is aimed at primary schools as well as secondaries, to enthuse and educate young people about space, electronics, physics and radio.

Also aboard will be the first GPS device aimed at measuring space weather in the plasmasphere, the area just beyond the Earth’s atmosphere.

There will also be a camera that will take images of the Earthusing a new type of sensor. It will also test the effect of radiation on instruments in space.

One of the organisations providing a package aboard is AMSAT, a group promoting amateur radio satellite tracking. Information has also been coming from a well-informed Russian space site, UB4UAD.

A CubeSat is carried in a lightweight standardised framework and then ejected from it by a mechanism that has been liked to a toaster.

Spaceplanes for the future

The rocket carrying UKube-1 into orbit will be a Russian Soyuz-2.1b with a Fregat M upper stage launched from the Baikonur Cosmodrome in Kazakhstan, with eight other satellites also aboard. But for the future, Craig Clark, chief executive of Clyde Space, emphasises that the opportunity is there for Scotland to push its way into the launching business.

“What I’d really like to see,” he says, “is for a Scottish rocketry entrepreneur to provide a launcher – maybe missile-based – so that we can enter the space race from somewhere like Lossiemouth or Leuchars. That would certainly put Scotland on the map and enable further practical use of space, which is one of my dreams.”

That vision of a Scottish spaceport has come a step nearer with the UK Government’s announcement of a major investment in the development of a revolutionary new rocket engine. SABRE, which is being developed by the UK company Reaction Engines, has the potential to revolutionise rocket technology and significantly reduce the costs of getting into space. If the new engine is successful, it will power a new type of spaceplace, called Skylon, which could deliver payloads of up to 15 tonnes in Low Earth Orbit at around 1/50th of the cost of traditional rockets.

A sector for growth

Already Craig Clark has taken Clyde Space forward to a global position in the CubeSat business. With 22 employees, almost all of them engineers, it’s the largest indigenous space company in Scotland. The bulk of its sales are exports – 80% outside the EU and over 95% outside the UK.

And with a growing world demand, he says, the potential of the space technology market for Scotland is huge. Today the sector is generating £20 million a year, but that, he says, is just the start, and he argues that it could expand to £5 billion a year and create 10,000 jobs.

“If we are successful in our business plan, UKube-1 will be the first of many more Scottish satelites.”

The achievements of the Clyde Space team have been marked by the Sir Arthur C. Clarke Award for Space Commerce, and Craig Clark himself is an invited member of the UK’s Space Leadership Council. In a special video interview made available for us, he and the company’s business development manager, Ritchie Logan, described the work and the vision of Clyde Space and showed one of the CubeSats that the company works with.

You can find more about CubeSats on the Spaceport Scotland site