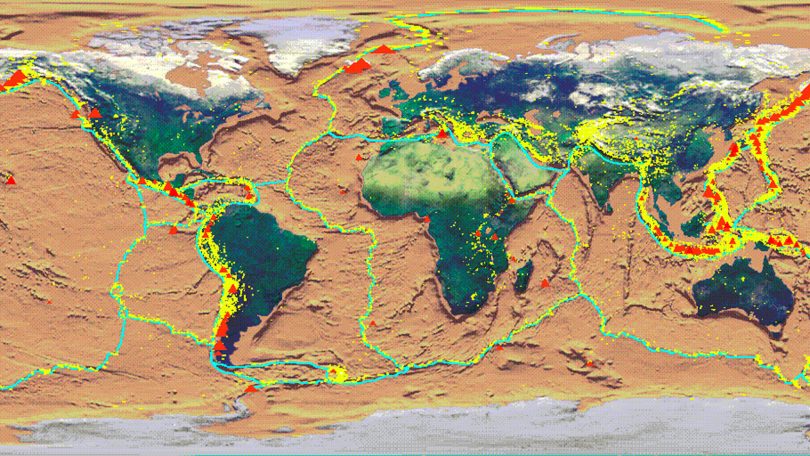 James Hutton, medic, chemist, farmer and the Father of Modern Geology lies at the heart of this story and at the heart of a new gallery, funded by the Heritage Lottery Fund, which introduces the story of Our Dynamic Earth.

The new gallery opened on 1st April 2014 and builds on the Hutton story, through the other Scottish geological giants Charles Lyell, Peach and Horne and Arthur Holmes but it places their work in the context of our modern understanding of Plate Tectonics. It is an opportunity to recognize the impact of ‘Scotland’s Time Lords’ on the evolution on Earth science and celebrate the fact that scientific discovery is at the heart of Scottish culture.

James Hutton was born in Edinburgh on the 3rd June 1726, the son of the City Treasurer. At the age of 17, he was apprenticed to a lawyer; but this did not capture his imagination. With a greater interest in chemistry, it was medicine that he studied when he attended the University of Edinburgh.

In those days, chemistry was an integral part of a medical education. Three years later he continued his studies in Paris pursuing “…with great ardour the studies of chemistry and anatomy” and took the degree of Doctor of Medicine in 1749 at Leyden University.

In 1750 he returned to Edinburgh and resumed chemical experiments with his friend James Davie. Their work on the production of sal ammoniac – ammonium chloride, a salt used in dyeing and working with brass and tin – led to a profitable partnership.

Hutton also had a keen interest in agriculture and farmed at Slighhouses and Nether Monynut in Berwickshire, farms he had inherited from his father. Hutton wished to apply his scientific understanding to agricultural practice and travelled extensively to gain new ideas, introducing the Suffolk plough to Scotland.

Thus, with two friends, Sir James Hall and John Playfair, he sailed from Dunglass, southwards along the coast to discover Siccar Point and its dramatic unconformity. Here Hutton revealed the true significance of what they were seeing. He demonstrated to his friends that the Earth had to be very much older than the 6000 years, the age generally accepted at that time. This started a quest for the age of the Earth which continued through to the 1940s when Arthur Holmes produced a revised age of around 4000 million years, akin to that accepted today.

Hutton’s other great controversial idea was that some rocks had been molten and injected into sediments. The evidence for Hutton’s view can be clearly seen at what is now called “Hutton’s Section” at the foot of Salisbury Craigs. The relationship between the Craigs rocks and the underlying sediments indicates that the sediments have been forced up and broken off by forceful emplacement of what must have been molten rock.

Hutton’s ideas were the subject of two lectures given to the newly-formed Royal Society of Edinburgh on 7 March 1785 and 4 April 1785. However, he did not publish his Theory of the Earth in book form until 1794.

In 1802, five years after Hutton’s death, John Playfair tried to explain Hutton’s theories in his Illustrations of the Huttonian Theory of the Earth. Still, Hutton’s concepts were not widely recognised until Sir Charles Lyell included them in his Principles of Geology in 1833.

Charles Lyell was born in Kinnordy, Forfarshire and was the great communicator of Hutton’s geological ideas and concepts. His Principles of Geology brought Hutton’s ideas forward. Importantly, Charles Darwin had a copy of Lyell’s book with him on his voyage on the Beagle. It was a book which greatly influenced Darwin’s thinking, giving him a framework of deep time in which evolution by natural selection could work.

The “Readers of the Rocks”, Ben Peach and John Horne

Fundamental to Hutton’s ideas was the concept that rocks would be put into a vertical disposition by major compressive forces, building mountains. Though Hutton surmised this process, he was unaware of the mechanism by which it could be achieved.

During the 19th century prominent geologists conducted a prolonged and bitter debate, the ‘Highland Controversy’, about the geological relationships exposed in the NW Highlands. This was finally resolved in 1907 by the work of mapping geologists from the Geological Survey, Ben Peach and John Horne.

The conundrum was explained by Peach and Horne to be due to the action of low-angle thrust faults bringing older rocks from the east over the top of the younger rocks. This was evidence of the major compressive forces envisaged by Hutton.

Working in Durham and then in Edinburgh, Arthur Holmes was able to use the emerging science of radioactive decay to date rocks and establish a numerical timescale for the events that shaped the Earth. For the first time, rocks and the events associated with their formation could be accurately dated and a chronological story of the evolution of the Earth could start to be written. Holmes is undoubtedly the other historical character who can stand alongside Hutton as a ‘Time Lord’.

There is an international dimension to this story which starts with a German polar explorer and meteorologist, Alfred Wegener. In 1912, he considered that the geometrical fit between South America and Africa suggested that they had at one time been joined and through time had drifted apart; the theory of continental drift. There was strong scientific evidence for this with identical fossils present on both continents.

Nevertheless, the scientific world would have none of it, there being no mechanisms by which continents could move. Holmes championed Wegener’s theory at a time when it was deeply unfashionable with his more conservative peers. Holmes proposed that the Earth’s mantle contained convection cells that dissipated heat produced by radioactive decay and thus moved the crust at the surface.

The next real advances were stimulated by the Cold War; the Americans wanted to know where Russian submarines were and vice versa. As a result research was funded into the nature of the ocean floor topography.

Marie Tharp was an American geologist and oceanographic cartographer working at the Lamont-Doherty Earth Observatory of Columbia University. Along with her colleague Bruce Heezen, she mapped the ocean floor including the Mid-Oceanic Ridges, a line of undersea mountains. Their first physiographic map of the North Atlantic was published in 1957. It formed part of the evidence that led Harry Hess from Princeton University in the 1960s to the concept of seafloor spreading from a mid-ocean ridge, opening up oceans and moving continents.

Further evidence to support this concept came from work on determining the age of the ocean floor and the geomagnetic signature contained within magnetic minerals. Sampling of the basaltic rocks of the ocean floor revealed a symmetrical pattern either side of the mid-ocean ridge. The ages of the rocks were shown to be progressively older away from the ridge.

This pattern was reinforced by evidence from the magnetic minerals which recorded the periodic reversals that have taken place in the Earth’s magnetic field through time. This symmetrical pattern revealed by Fred Vine and Drum Matthews working in Cambridge University and Lawrence Morley of the Canadian Geological Survey demonstrated conclusively that magma was rising up along the Mid-Ocean Ridge and moving away from the ridge giving the mechanism that Wegener was looking for to move continents.

The corollary of this process is that if the Earth were not to be seen as continually expanding then there must be zones where crust is destroyed, compensating for the generation of new crust in the Mid-Ocean Ridges.

A process known as subduction emerged from studies of location and depth of the epicenters of earthquakes, together with the information from the ocean floor topography. Oceanic trenches were identified with earthquake epicenters becoming progressively deeper away from the trench. From this emerged the concept of a dense oceanic plate moving below a lighter continental plate. As the oceanic plate moves into the hotter areas of the crust and mantle it begins to melt, helped by the addition of water which reduces the melting temperature. In this way the oceanic crust is destroyed, generating magma which rises to the surface.  This produces volcanoes which increase the volume of continental crust.

The work of these scientific giants over a period of over 200 years evolved our modern understanding of plate tectonics and inspired the new gallery in Dynamic Earth. A book, A Geological Miscellany which contains stories about geology and geologists quotes a letter, bearing marks of scorching, and apparently written by James Hutton, and received by the editor of Séance de la terre:

… We all look forward to meeting some of your young colleagues who have made such spectacular advances in plate tectonics, and I am especially glad to hear that they are using my heat to drive their plates…

Science never moves on through only the work of one individual but by successive generations standing on the shoulders of giants. James Hutton was one such giant!

Professor Stuart Monro was instrumental in establishing the science centre Our Dynamic Earth, where he is the scientific director. With a degree in geology from Aberdeen and a PhD from Edinburgh, he spent much of his career with the British Geological Survey. He has taught geology at all levels in the Open University and is an honorary professor at the University of Edinburgh. Other awards include an OBE for services to science and the Distinguished Service Award of the Geological Society. He is also the scientific director of the Scottish Consortium for Rural Research.