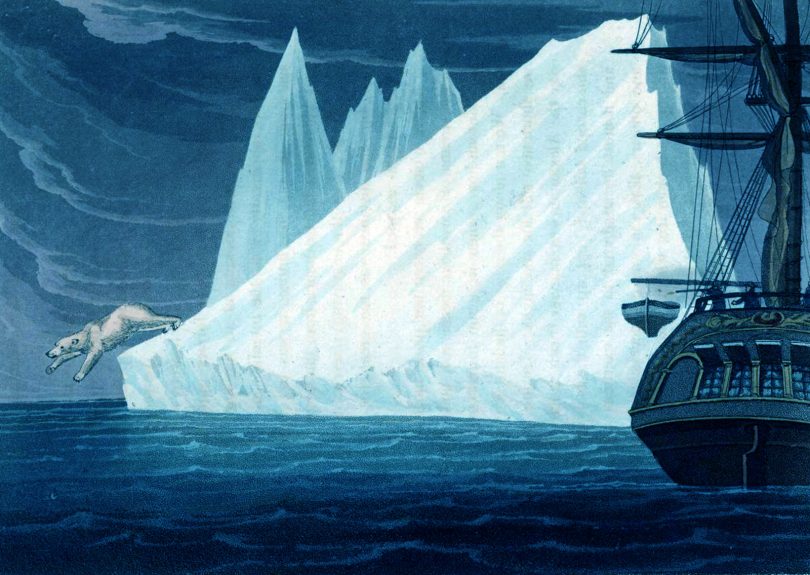 "A Bear Plunging Into the Sea." From an 1819 account of John Ross' arctic voyage

The name Barrow meant nothing to me until my youngest brother went on a solo trek through Baffin Island. While following his progress on the map, amongst the plethora of names which track Arctic exploration, I saw Barrow Strait, Barrow Sound and Barrow Point. (To this, as I discovered later, we can add the northern duck Barrow’s Goldeneye and also Cape Barrow in the Antarctic.)

Eventually, I picked up the book and then couldn’t put it down. Who then was this Barrow and why did Fergus Fleming write about him? Quite simply Barrow was, ‘the father of global exploration’.

A massive claim for a person who didn’t leave these shores apart from a couple of trips to the continent after his appointment as Second Secretary to the Admiralty in 1803.

There he remained until he retired in 1845 aged 81. During this period of office, ostensibly as a senior civil servant, Barrow ‘dispatched volleys of expeditions’, the motivations for which were mixed and various but which generally speaking went where no civilised person had been before.

Although Barrow’s main justification for the enormous costs of these expeditions was to gain knowledge for the purpose of commerce, his own motivation seems to have been to get there and lay claim before the French did. So, all of the expeditions resulting in the stories of ‘derring-do and lunacy’ which Fleming goes on to tell, happened because Barrow made them happen.

The expeditions spanned the globe, including searching for the course of the Niger, hunting for the Northwest Passage and looking for Timbuctoo (we find out why) but before we even make a start on those, Barrow’s own story is remarkable, given what we know or think we know about social mobility at the time.

Born in 1764, we’re told that John Barrow came from a lowly farming family near Ulverston and left school at age thirteen – ‘by which time he could read Latin and Greek and was conversant with Shakespeare’.

He went on to learn maths and astronomy from a ‘wise man’; kept the accounts of a local iron foundry; spent a summer whaling off Spitsbergen; attended the Astronomer Royal at Greenwich and learned to speak and write Chinese from a pupil to whom he was tutor – all of this by age twenty.

His lucky break, if we can say that about such a prodigy, came via this same pupil whose father was a baronet and who had the ear of Lord Macartney, who just happened to need a speaker of Chinese since he had been proposed as a potential Ambassador to the Chinese court.

The resultant trip to woo China turned out to be a humiliating failure for Macartney since the ‘presence of a British ambassador was not in harmony with the Celestial Empire’. Neither did they like our stuff and so Macartney was politely but contemptuously dismissed. However, Barrow was a hit with Macartney, who happily was appointed as Governor to South Africa shortly after the Chinese debacle and took Barrow with him.

On to the Admiralty

Barrow’s eventual and final appointment as Second Secretary to the Admiralty was another story of patronage but Fleming insists that Barrow was well chosen as a ‘bureaucrat par excellence’. He also knew a bit about ships, international affairs and had written two books about China and South Africa.

The first ten years or so of Barrow’s time as Second Secretary were spent establishing himself as a geographer, writing, becoming a Fellow of the Royal Society and toadying up to Sir Joseph Banks, long-time president of the Royal Society, who apparently and rather disappointingly, ‘readily swallowed gross flattery’. However, Banks was obviously a valuable patron of the sort of exploration towards which Barrow now turned his ambitions. Basically, any blank area on the map would do.

Now we get down to the nitty-gritty. Barrow’s first ‘Boy’ was an unfortunate chap called James Kingston Tuckey. His orders were to explore the Congo as far upstream as he could.

The aim was to see if the Congo connected to the Niger or even ended up in South Africa.

How beguiling blank areas on a map must have been and how easy it must have been to fantasise about what might be there – a particular vice of Barrow’s. With two centuries of hindsight, we know about yellow fever and slavery, and the numerous difficulties which made this part of Africa the white man’s grave. Not so poor Tuckey: I won’t spoil a good yarn but at the conclusion of the expedition Barrow found the inevitable failure ‘almost inexplicable’ and wrote: ‘Never were the results of an expedition more melancholy and disastrous’.

Unfortunately, this set the tone for many that followed.

Travellers to the Arctic

Barrow turned his attention to the Arctic and particularly the Northwest Passage with occasional bursts of enthusiasm for the North Pole. The stories of these expeditions with their famous participants – John Ross and his nephew James, William Parry, John Franklin, George Lyon, George Back, John Rae and many more – are incredible. All of them are epics and make space travel look like a picnic in the park.

There are tales of endurance and heroism and horrible dining experiences (e.g. the story of the man who ate his boots) best read in front of a warm fire.

How did these Arctic travellers keep their sanity when the ice closed around the ship again as yet another summer blinked past with no hope of escape? And yet escape many of them did, even after multiple over-winterings in the ice and the dark, coming home with new charts; filling in the blanks with islands and capes and channels; finding the Magnetic North Pole but sadly not the Northwest Passage or the North Pole.

Barrow was usually unimpressed and dismissive. He had his favourites but often took unreasonable dislikes to his expedition leaders and blamed them for everything that went wrong. He seemed to make no connection between the vagueness of his instructions (e.g. to Parry, ‘Head straight for Lancaster Sound and sail through the NW Passage’) – and the reality of the vast wastelands of frozen ocean, ship-crushing icebergs and vile weather which awaited his explorers, not to mention that the existence of the Northwest Passage was still only a theory.

In spite of the dangers of the Arctic, Barrow’s explorations in the hot and deadly regions resulted in significantly more horrible deaths, and not just from disease.

The local inhabitants were a far greater hazard than the peaceable ‘Esquimeaux’ and ‘Greenland Highlanders’ of the Arctic whose most sinister behaviour involved creeping up behind sailors and giving them a fright – to their own great amusement.

One unfortunate young man, Gordon Laing, who eventually found Timbuctoo, fell prey to Tuareg warriors, and Fleming documents half a page of the gruesome injuries which he sustained including five sabre cuts to the crown of the head, three to the temple leaving fractures with bone coming away, a divided ear, and much, much more further down his body, only to recover and then catch the plague!

Fleming reminds us uncomfortably of the resources, both animal and human, that our prosperity has been built on. The scale of the slaughter of whales in the Arctic makes for difficult reading. When searching for the Northwest Passage in 1819, Parry rounded a corner in Baffin Bay and came across the British whaling fleet of 40 ships, each of which might go home with 90 whales.

The scale of human exploitation observed by some of Barrow’s African explorers can scarcely be believed. It was estimated that 20,000 slaves were trafficked across the Sahara every year with many perishing, often in mass deaths when oases failed. The bones of animals and humans littered the slave routes. In places the drifts of human bones were a hundred deep and progress was accompanied by crunching sounds for mile after mile; horses’ feet got stuck in skulls.

A world not far away

The events which Fleming describe really did not happen all that long ago. Barrow died only twenty years before my own great-grandfather was born in 1867, into a world where motor cars did not yet exist. He died the year before Neil Armstrong stepped onto the moon (in 1968, when I was 19). And yet Barrow met Nelson.

Fleming writes with an enthusiastic and conversational style as though he had just discovered these stories and could not contain his amazement. However, this disguises the meticulous research which provides us with so much detail of the human side to these exploits; stories of petty conflict and jealousy; long standing grudges resulting in volleys of published pamphlets which could teach internet ‘trolls’ a thing or two.

It turns out that Fergus Fleming is the nephew of Ian Fleming, creator of James Bond, so perhaps there is a story-telling gene in there somewhere. Barrow’s Boys is the first of a number of books on exploration by Fleming including Killing Dragons, The Sword and the Cross, and Ninety Degrees North.

In an interview with John Connolly, Fleming admits that he is no mountaineer or adventurer. He is drawn to these epic tales because ‘They’re just great stories’. We are fortunate indeed that we have him to tell them.

Barrow’s Boys, by Fergus Fleming, is published by Granta.

Wendy has been a lover of high wild places and high latitudes all her life despite, she says, being scared of heights. After a fifteen-year career in cell biology research, she had an opportunity to manage the medical research of the British Antarctic Survey. This took her on many visits to remote places, including Yukon, Iceland, and the Antarctic itself. She has a degree in zoology and a PhD, and also worked for Highland and Islands Enterprise and ran her own consultancy.