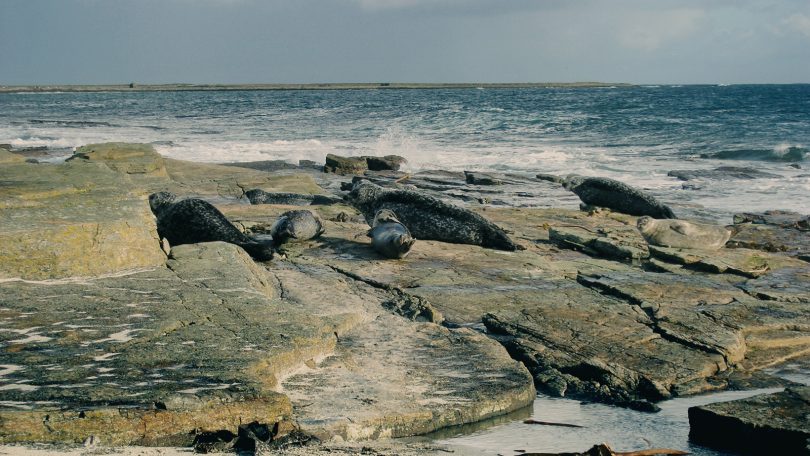 Seals on the shore North Ronaldsay

Seals are part of our life. The people of North Ronaldsay are called selkies by the rest of Orkney. Seals are all around the island, but especially on Seal Skerry, where they have their pups, and congregate for great seal conventions and singing rallies.

A song by the shore

When the sea haar rolls in, damp and amorphous, the seals begin their strange music, high-pitched and eerie, echoing out of the mist, and blending with the gentle splash and ripple of waves on the shingle. Their voices have a curious human quality, disembodied and far off.

When I go to fetch the cow home for milking, my feet wet from the soaking grass and marsh marigolds, it is strange to hear the seal song in the silence, with the muffled boom of the foghorn diminishing into the milky white vapour.

Because there is no shooting or culling here, the seals have little fear of human beings, and come in close to the shore. When our four children paddle in the sea, a solitary seal keeping an indolent eye open for anything curious or interesting, soon drums up a few friends and relatives, by some mysterious underwater signal, and heads begin to appear all round. They swim in, and follow the splashing children all the way along the beach and back, keeping a pace, and watching intently.

One night when I was taking a short cut along a sandy white bay, I came round a dune and saw a large seal only four feet away. He was completely unaware of any stranger, and I could see the beads of water shining on his sleek, speckled fur, and his sharp teeth as he opened his mouth to yawn sleepily. He scratched himself with a flipper, and rolled over on his side like a dog stretching out. He snuffled and grunted, and shook the water from his head. Eventually he spotted me, and quickly sidled down the beach and into the water.

The seals used to provide lamp oil and pelts long ago, and figure in legends and songs, like ‘The Great Selkie of Sule Skerry’. Even in this island, there was said to be a man who met a seal maiden dancing on the beach, and stole her sealskin, thus capturing her for his wife. She brought her sea cows with her, and bore seven children. Eventually, however, she found her skin hidden above the lintel of the door, and escaped back to the sea, calling her cows to follow her.

Down near the pier there is always a large colony, sleeping on the rocks and sand when the tide is ebbed, or basking in the sun in summer. They are beautiful to watch. Occasionally a baby seal is stranded up on the rocks, and lost by his mother, and he is left there alone and hungry, until hopefully she manages to retrieve him at the flood tide.

Seals are not liked by fishermen. They eat large quantities of fish, damage nets, and get in the way of creel ropes. But they are a natural part of our environment, as much as the birds, and their beauty and grace fascinate us as they splash and roll in the sea. We are lucky to live so close to this elusive creature of myth and superstition, the pinnipede with at least one flipper in mankind’s door.