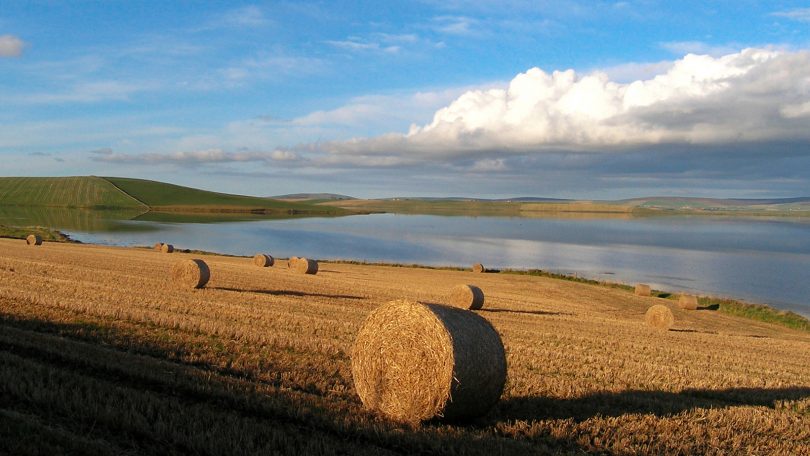 Hay bales at the Loch of Stenness

‘Structures’ means anything above ground which is not actually in contact with the sea or a burn. In other words: houses, garages, barns, studios, medical centres, commercial and light industrial premises and so on – anything up to 2½ storeys high.

What about fire? A straw bale structure is more resistant to fire than many other conventional structures. The analogy often used is: ‘like trying to burn a telephone book’. One professional test gave a straw bale wall a fire resistance of over two hours – a domestic door is rated for 30 minutes.

And what about rats and mice? They love voids, but in a properly built straw bale structure there are none. There is an apocryphal story of a straw bale householder taking off the cover of an electrical fitting and finding a family of desiccated mice behind it.

Straw and clay mixtures – typically sun-dried bricks – have been used for thousands of years. When a brick dated 3000 years old was broken apart, the straw inside was still as bright and golden as the day it was made. The oldest straw bale houses in the world are around 130 years old; the oldest European straw bale house – in France – dates back to 1921. They have been built in the UK for around then to fifteen years.

Building-grade straw bales are the old rectangular version and need to be as tight as possible and stored in dry conditions. Barley, oats and wheat are all suitable, with a slight preference for barley as the straw is kinder to the hands. In good years the bales can come straight off Orkney fields.

There is only one specialist tool needed, and that is a baling needle, easily made by blacksmiths and most farmers.

You need basic carpentry – the ability to cut wood and Sterling board straight and at right angles and screw them together. The roof, however, will need a bit more skill.

Although you could learn from books how to build with straw bales, it is much better to go on a practical course.

These courses are not expensive and are also a lot of fun, and you get to meet folk from different walks of life. (It’s how I started and became infected with the straw bale idea.) There are two or three organisations which run these – googling will find them. I discovered Straw Works – the main teacher has the patience of Job and is a super teacher.

Barbara Jones of Straw Works says: “No straw bale house has ever been refused planning merely because it was straw bale.”

Apart from needing a structural engineer’s report, there are no unusual problems here.

As with all structures, it needs to be well drained. Lack of adequate drainage was one of our problems. Ideally you will need to follow standard Orkney practice and point the smallest side into the wind.

Because of the significantly lower weight, the foundations do not need to be as deep nor do they need to be concrete. Our house in Orphir has foundations which are compacted crushed rock.

Clay is beautiful. It is the most forgiving material I have ever worked with. It is ideal to the beginner, since if you decide that you’ve made a complete mess of it, you can scrape it off, remix it and re-apply.

In Orkney I would not recommend clay for an external render unless the site was an unusually sheltered one. In sheltered locations there are 1000-year-old clay structures known, and in England there are cob houses 700 years old. The old saying about cob houses applies equally to straw structures – “They need a good pair of shoes, a good hat and overcoat.”

Failing clay, then it has to be lime. Never ever cement. Lime renders and plasters breathe – cement doesn’t. So when (not if) you get water coming in through leaks or micro-cracks in a cement render, the water stays there.

Lime is also easier to use and much easier to repair. It is more expensive than cement but the wastage is much lower. Lime mortars, renders and plasters can be kept in usable condition for at least a year or more

The aggregate for these plasters needs to be selected with care. External renders need a sharp sand. Beach sand can only be used for an internal-finish plaster coat after it has been very well washed to get the salt out. Failure to wash it will encourage damp. Damp is a vicious enemy of straw!

The advantages to Orkney residents of straw bale construction are:

Orkney weather! You must keep the bales dry at all times, especially from the top. So every evening all work needs to be covered up with tarpaulins and uncovered the next morning. That is the usual method used in the south.

However there is an alternative and that is the ‘Roof First’ technique. This was used in the construction of Europe’s biggest straw bale structure. Here the roof to a water-shedding layer is built directly on top of the straw bale wall-plate. This has the advantage of the joiners who build the roof doing so from the ground, which is quicker and easier, and also saves scaffolding hire costs. The roof is then jacked up bit by bit, to allow the bale walls to be built, then lowered onto the completed walls. You now have an umbrella to work under and so are not nearly so reliant on favourable weather.

If you would like more information on building with straw bales, or to look over a straw bale house, please contact me at nick.orkney@gmail.com