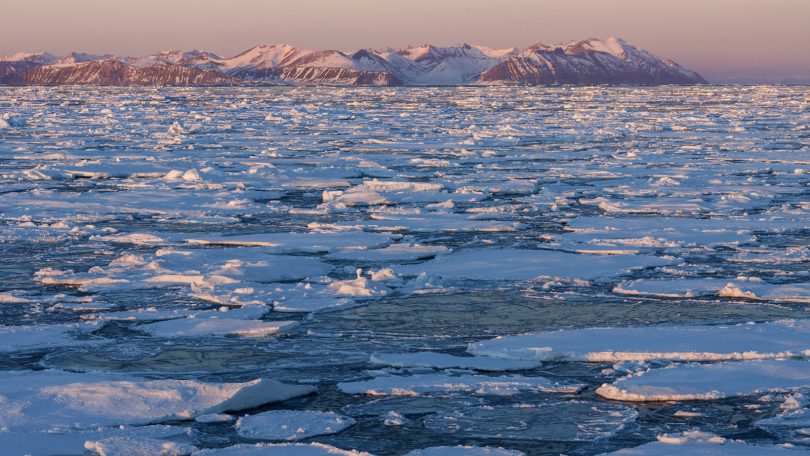 Sea ice off the coast of eastern Greenland.

We are living in a disaster, he says, pointing to the increase in extreme weather events – but we are not doomed yet. We already have a solution with the potential to return the carbon dioxide in the atmosphere to pre-industrial levels; but its deployment and efficacy are dependent on human psychology and political will, and he is less than optimistic about either of those.

We need to forget about carbon emission reduction, he says. The situation has already escalated far beyond anything it could hope to achieve and has reached the point, however unpalatable, where simply reducing our CO2 output is completely ineffective. The CO2 already in the atmosphere stays around for hundreds of years. Everything in the global economy from roads and rail to making concrete and steel is concerned with fossil fuel usage and it will take time to change – time which we no longer have.

What we need, says Professor Wadhams, is a united effort, a kind of Marshall Plan for the world to remove existing CO2 from the atmosphere and restore balance using technology known as Direct Air Capture (DAC), already successfully deployed in areas of Canada, America and parts of Europe.

Scientifically it works. We don’t have to invent a new process. We can do it with the technology we have. We just have to make that technology work better. All of these carbon emission reduction methods, which is the official view of how things should be done, are actually pointless. We have to go for CO2 removal and that’s the thing that maybe hasn’t got across to people. It’s been kind of rammed home that we need to reduce our emissions, but that’s not enough. We could reduce our emissions to zero and we still wouldn’t be doing anything to improve the climate.”

Capturing from the air

So why are the world’s leaders not pushing Direct Air Capture right now? The answer, says Professor Wadhams, is fear and lack of vision. He says that most politicians are fixated on the results of the next election. They are reluctant to commit to anything which is expensive or may not be a universally popular choice and, despite its necessity, Direct Air Capture still has its detractors, mainly because of the aforementioned reasons, as Professor Wadhams explains:

The machines are like huge air conditioning systems in which a huge number of big fans blow air across a scrubbing system – often something very simple like sodium hydroxide solution – which absorbs carbon dioxide. Then you tap that off, dry it and do something with it. In the case of an American system, you actually turn it into rock, or into sand, which is useful. Another system which turns it into jet fuel might seem self-defeating, but at the moment we can’t make electric aircraft successfully, so if you have to have fuel-driven aircraft then let’s make them out of fuel that you already got out of the atmosphere.”

These measures are operating successfully at low level, but as Professor Wadhams explains, we need to be doing this on a global scale and spending billions, but we are not, and we are running out of time. There is also a tendency to become distracted by other measures which may in themselves be good, but which we have no time to develop.

Schemes such as taking CO2 out of seawater so that the CO2 currently in the air will rebalance itself in the ocean, or growing kelp then harvesting, drying and burying it may seem plausible methods but right now we have neither the time nor energy to develop them. Our attention should be fixed firmly on Direct Air Capture.

The gathering in Glasgow

The forthcoming COP 26 Conference in Glasgow has never been more important, and Professor Wadhams is hopeful that the United States, or perhaps conference co-hosts Italy, will succeed in conveying urgency and galvanising global action. The UK so far has fallen short.

Since the 1980s and 1990s all international agreements have had been concerned with achieving certain CO2 reduction targets by 2050 but the latest scientific evidence from the UN’s Intergovernmental Panel on Climate Change (IPCC) makes a nonsense of this. We now have less than 10 years to make a difference and it will take strong and decisive leadership from a world leader to save us, Professor Wadhams says. He does not see that leadership coming from Britain, but is hopeful that the USA, which, he says has gone from being one of the worst countries in tackling climate change to being one of the best, will be able to take on that role.

Journeys to the Polar regions

Professor Wadhams began his career as an oceanographer, landing his first job on a Canadian ship circumnavigating North and South America, sailing first to the Antarctic and then up the other side through the Northwest Passage – a real initiation into the Polar environment. The work involved taking readings and measurements and plotting them in an oceanographic atlas where, it was assumed, the greater the number of readings from a variety of areas would produce more and more accurate results. However, these atlases were later abandoned when it became clear that oceans were constantly changing, and instead the focus shifted to recording those changes. Professor Wadhams’ area of expertise became the thickness of ice in the Arctic which he measured using an echo sounder from inside a submarine. It did not take long before his results revealed the ice was thinning.

It was a shock initially. The first time I compared two sets of data and found a 15 per cent reduction in ice thickness I thought this must be an accident or mistake, or maybe it happened that one year and it will come back the next year, but it didn’t, it kept on going down. Now it’s about 50 or 60 per cent down.”

It also gradually became apparent, not just in the data, but also physical observations, with the visible retreat of ice and an increase in open water. This discovery led him to investigate other parameters of climate change and to the worrying realisation, as stated in his 2018 book, A Farewell to Ice, that the Arctic is warming faster than any other area of the world and exerting huge influence over the global climate.

In addition, and increasing the acceleration in climate change, is the darkening of the Greenland icesheet. As newer white ice melts, the water drains away revealing old ice covered in the dirt of forest and brush fires and plankton which then absorbs more radiation and melts much more quickly.

Today’s extreme weather events – massive cold spells, hot spells, floods and so on, at a level we never used to get before, seem to be associated with the Arctic as well. The difference in temperature between the arctic and the rest of the world is decreasing so that the whole world, in terms of its wind systems, is getting weaker. The winds that lie between – the Jet Stream – is getting weaker and you are getting air masses from the Tropics wandering off into the Polar regions and vice versa. These weather events themselves are having a bad effect on crop production because they are happening in middle parts of the northern hemisphere where we grow most of our crops.”

Sadly, there is no escape from the fact that these changes are a result of human activity, fueled by capitalism and consumerism. Professor Wadhams points to the dichotomy of living on a finite planet while trying to produce infinite resources. What happens next is all down to us. We have clear facts about how the climate works, direct experience of extreme events and we know what we need to do.

We should all be thinking about reducing our footprint on Planet Earth and that doesn’t just mean driving a smaller car. It is also concerned with how we live, the food we eat, how much we travel and whether our philosophy of life is keep accruing more and become wealthier or to live more simply and sustainably and keep our existence closer to what the world can actually manage.

Accustomed to being labelled alarmist by climate sceptics, Professor Wadhams admits to occasionally feeling overcome by despair. He has been campaigning about the threat of melting ice and global warming for many years and has seen his work move from the realm of statistics and predictions to its manifestation in extreme climatic events across the world, yet he continues to hope, particularly in the younger generation, people like Greta Thunberg and the students at the Politecnico di Torino in Italy where he is currently Visiting Professor. They understand the situation, he says, and they are very angry that their future could be robbed by a generation who did not care enough to do anything about the situation.

He has also recently aligned himself with all-electric motorsport company Extreme-E as head of its scientific committee. Drawn by the company’s environmental objectives and its ability to use its profile to stimulate research, education and action to combat climate change in some of the most remote and endangered ecosystems in the world, one of the next races will be in Greenland, highlighting the melting ice sheet and the causes of black ice.

These are some of the things which give him hope along with the fact we have a solution capable of bringing the climate down to pre-industrial levels.

The trouble is I don’t see it happening. The more people realise what needs to be done, the less likely they seem to be to do it. I go to all kinds of meetings to various groups involved in climate and it’s almost like they are hitting their heads against brick walls trying to get across the fact that we have to do this now and we have to spend however much it is going to cost.

If the battle is lost, we are lost. There really isn’t anything else we can do that can save the planet now. We have blown it in every other way and failed to do what we should have done, and I think this is all that’s left to us. If we can do it, we have saved ourselves, if we can’t, we are lost. There isn’t another solution.”

Professor Wadhams is currently writing a book, Mining the Sky, dealing specifically with removing CO2 from the atmosphere.