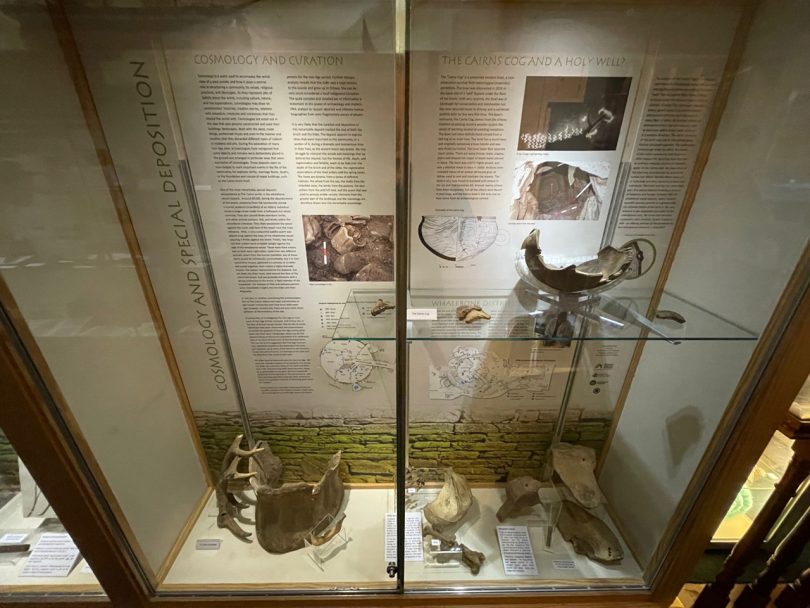 We’ve followed developments at the archaeology dig at The Cairns, South Ronaldsay since it began, with earlier accounts in a Part One and a Part Two.

The dig couldn’t take place for a couple of years due to Covid. It was all set to start this year when unavoidable circumstances meant it had to be cancelled, which was very disappointing for Brochaholics!

However, there has been an exhibition about The Cairns in Stromness Museum this summer.

My problem was/is that I’m one of those folk who, due to health difficulties, hasn’t gone anywhere indoors where there will be unknown people since March 2020. So, how do I get to see the exhibition? Mike told me that when he used to actually go in to work (working at home since March 2020), he’d regularly call into the Museum in his lunch break and would often find it empty. We decided that, if we waited until October when there wouldn’t be so many visitors, and timed it right – a weekday morning – it might be OK for me to go to see something which I would be sorry to miss.

The irony is, that I usually try to encourage folk to visit the Museum but, for a change, I was hoping to find it empty!

So, on a Tuesday in Brochtober we went along, and I homed in on The Bowl.

The well, and the bowl found in it, have fascinated me. The well is a special place – the bowl was in the well – what was it used for? Maybe the big human things – a blessing on a joining, a naming, to wash the dead?

I got the chance to see the bowl in reality – and think again of where it was found, and what it might have been used for.

The X-ray image in this display shows repairs carried out to the bowl – which must have been a highly valued object – possibly for a number of reasons. The close-up at the right of this pic is of a piece of knotted human hair also found in the well.

Orkney wood-turner Michael Sinclair made an absolutely beautiful wooden replica of the Cairns bowl which even has ‘repairs’, reflecting the repairs on the Iron Age Bowl.

There are other bones….

… including the Wee Heid/Piddock stone….

And then there’s the ‘Cairns Bling’ – the fact is I’m not too keen on the jewellery from The Cairns. I can understand the significance of it being found, and also the importance of the evidence of the methods used in its production – but it’s just not in a style that appeals to me. But, for those who can’t get to see it for themselves … here it is….

I do however like the beads – very much so, and have enthused about them, and other ancient beads, previously.

And… examples of the kind of plant life to be found around The Cairns Broch and village all that time ago….

I’d been to the exhibition, written this article, and then I read this.  Which reminded me of this. Turns out the man was a woman – but the question of fish consumption still stands! Oh, and it makes me wonder.