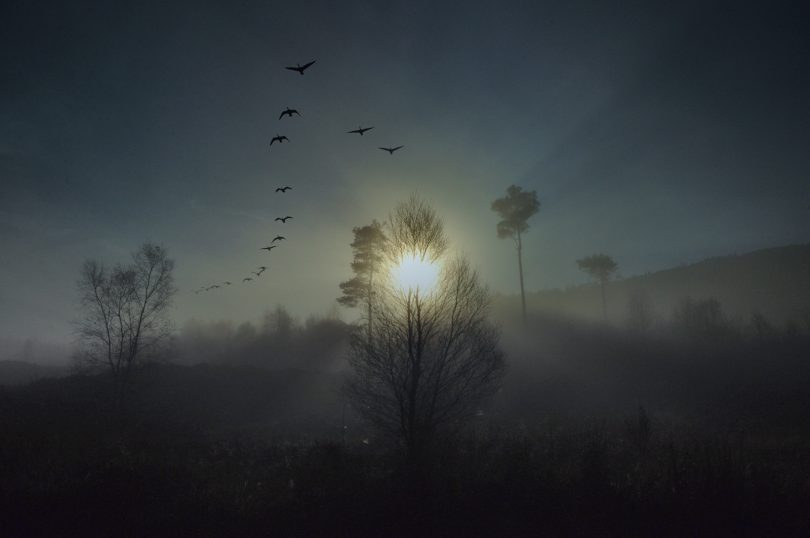 Winter stayed well into April, and as I dug holes for apple trees T. S. Eliot swirled in my head:

Then summer burst upon us and the sun was relentless in keeping us warm. And now winter wraps her dark arms around us once more and the world, from dawn to dusk, is squeezed of light. The days barely whisper their breaking as night steals away their longing, until the solstice on the 21st. Here is a point on the seesaw of the yearly cycle where everything stands, mingling memory with desire, decay with potential, and we look back over what has been, and imagine a tomorrow, when the sun gradually returns.

The summer before blossomed and gave way to autumn harvest and fall of the flower heads and leaves, bringing all that goodness back down to the Earth. Microfungi (endophytes) actually living in the leaf are triggered into activity and begin feeding before the leaf hits the ground. Winter is a time when certain fungi set to work: Scarlet Elf Caps, Snowy Waxcap, The Goblet, and Wood Ears arise from their sometimes enormous mycelium bodies hidden underground.

Our summer blossomed into a decision to homeschool my daughter (then aged 8). It is a step that led us to Orkney and the Science Festival in September. And for voyagers into the unknown this was an absolute treasure chest of awe, memories, creativity and an atmosphere of fervour where facts are not solid like impenetrable, unmoving objects but facts are interwoven into a landscape of knowledge that can crack and be remoulded like rocks being split open by ice or fire.

Our first port on this extraordinary journey was a lecture by Professor Ian Robson of the Royal Observatory Edinburgh, astronomer and on a panel who downgraded Pluto to ‘dwarf-planet’. His subject: Supermassive Black Holes. We found ourselves transported into the universe, that thing all about us, those vast reaches beyond our heads into infinity. Two things remain with me after this talk and these are; there is a Supermassive Black Hole at the centre of every galaxy, and that Professor Ian Robson said “I don’t know” in reply to a question.

What a statement of potential, “I don’t know”. I grew up with a presentation of ‘facts’ as immovable objects, like untouchable tombstones in a icy vastness, and these three words just melted that ice in a surge of excitement of new-found joy to explore Life unabashed and wholeheartedly. We stepped  into the Orkney Science Festival, into a world of wondering, noticing, and ripples of cascading knowledge growing, fusing and forming like those vast tracks of invisible mycelium. We were invited to come on a journey of discovery, to places of hypotheses, research and diversity with a sense of profound connection with the past, the natural world and the universe we are part of.

In Orkney this summer there was a sense of the movement of time across a landscape that has been inhabited for millennia, where technology has shifted continuously, and facts, stories and art meld and mould. The Science Festival is held on the canvas of an ancient land walked by many, imbued with memories, and it paints with the words of exploration, potential and curiosity, where dark matter and accretion discs transport us skyward. Where we can programme lasers and walk on the moon. Where we discover water bears and that a limpet’s tiny teeth are made of the strongest biological material ever tested. We’ve ‘seen’ neutrinos, or ‘ghost particles’ that pass through our bodies at a rate of 100 trillion per second though cutting-edge apps on tablets; driven a Mars rover; designed a butterfly on a 3-D printer, seen bubbles turn golden before they burst and learnt the Moon is most possibly a result of a planetary collision with the Earth 4.5 billion years ago, and it was this that gives us our tilt and seasons.

Which means winter right now, where we spend more time in darkness than light. We may even fight against and fear the darkness, wrestle unsuccessfully with the ‘I don’t know’ darkness, maybe even feel shame that we ‘don’t know’ because someone once said that we ‘should’. Or we can find that point of stillness the solstice offers, of vast potential, and know that underneath us is a city of life, with more organisms in one teaspoonful of healthy soil than the whole of humanity. And above us, an intricate dance of celestial bodies, some that we can’t directly observe, like supermassive black holes, but infer their presence by their effect on other matter nearby, like stars orbiting around perfectly.

Peoples before us have revered the winter solstice with stone circles and chambers left for us only to wonder why. The Iroquois (Haudenosaunee) tribes of Northeast America believed that as Mother Night reigns over the Earth she walks through dreams with messages. At dawn, every tribe member is gathered to relate their visions, and a new council is chosen. So take your dreams and possibilities into winter, and cherish your memories as the darkness of the solstice deepens before desire emerges again when new life returns with the Sun.