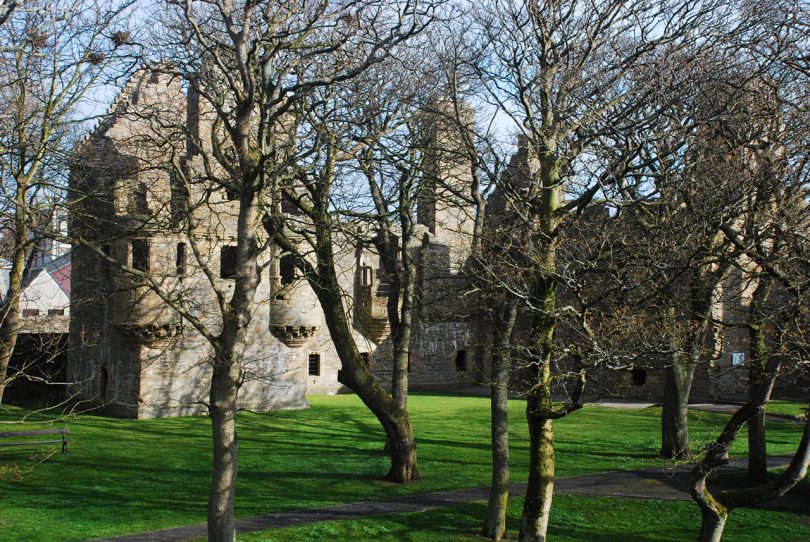 The Earl’s Palace in Kirkwall was built by Patrick Stewart at a time when deep currents were coming to the surface across Europe, in politics and in ideas. A chain of events was unfolding, that would lead to thirty years of war, amidst which modern science would be born.

The building work started in 1600 and finished in 1607. In the years between, a new supernova blazed in the Milky Way in 1604, brighter than any star in the sky. Its appearance was a fundamental clash with the teachings of scholars and churchmen, who held that the heavens were eternal and unchangeable and fundamentally different from the pattern of change in our changing world below. The supernova widened the growing cracks in the rigid medieval worldview of the perfection of the heavens.

The cracks would grow further in 1609, when the Imperial Mathematician in the city of Prague, Johannes Kepler, would publish the first two of his laws of planetary motion, showing that the Earth and the planets move round the Sun. This overthrew long centuries of the Earth-centred picture that had become part of official church belief. Kepler also showed that the planets move in elliptical orbits, directly contradicting the official view that everything in the heavens moved in circles, which were seen as the shape of perfection.

In that same year of 1609 Galileo would turn his newly improved telescope on the Moon and show that it had mountains similar to those on earth, thus suggesting that heavens and earth are made of similar material. That again undermined the medieval picture of a fundamental separation between the perfect heavens and the changing earth. He would go on to turn his telescope on to Jupiter’s moons and Saturn’s rings.

Meanwhile there was a gradual build-up of tension between the great Catholic and Protestant powers of Europe that would break out in 1618 into the Thirty Years War. It was the most destructive conflict in Europe before World War I.

A key figure among the Protestant powers was the leader of the Dutch, Maurice of Nassau. He was one of the most formidable soldiers of the time. The Dutch had for many years been in rebellion against the Spanish, but when Maurice became their leader in 1585 he took the struggle to a new level. He trained and organised the Dutch army to a level of professionalism far ahead of the time. His men were paid adequately and regularly, well armed, kept physically fit and mentally alert, and encouraged to use intelligence and initiative in battle. They were trained in fortification and siege warfare by skilled mathematicians.

In December 1594, King James VI of Scotland sent an emissary to Maurice, to ask for three things. The first was to confirm a treaty of mutual protection. The second was to provide some infantry and cavalry for Scotland. The third request was for Maurice’s sister Emilia to marry Earl Patrick of Orkney.

The earl and the king were cousins, grandsons of King James V of Scotland. So the marriage would have been a step towards a full-scale alliance between Scotland and the Netherlands. Further, the Dutch already had support from the English, and indeed this is why Spain had sent the Armada to England in 1587. So the proposed marriage would have had a three-way impact, strengthening links between Scotland, England and the Netherlands, with Orkney as a direct channel of contact. It could have been the nucleus of a Protestant alliance to counter the Holy Roman Empire and Spain.

It didn’t happen. Emilia said that Orkney was too far away from her family. The earl married in August 1596, with his wife from the Bellenden family, which helped relations between the Stewarts and the Bellendens. The following year Emilia married – secretly, to a Catholic husband from Portugal. In response her brother Maurice banned her from his court for ten years but eventually forgave her.

A journey to Bohemia

But a generation later there was a marriage between the two families – of Maurice on the one hand and of James, who in 1603 became King James I of England as well.

On the night of Patrick Stewart’s wedding, which took place in Callendar in Perthsire, King James VI rode off to Dunfermline Palace to see his newly-born daughter Elizabeth. She would on Valentine’s Day 1613 marry Frederick, Count of the Palatinate on the Rhine and a nephew of Maurice of Nassau.

It was this marriage that was seen as creating a Protestant alliance in Europe. But the high hopes it raised led Frederick to make a terrible mistake. In 1619 he was offered the crown of Bohemia by its Protestant nobles, in rebellion against the Empire. His acceptance brought down the wrath of the Empire and Spain. He and Elizabeth had to flee Prague in haste and go into exile, and he lost his lands in the Palatinate as well.

The currents that swirled through the thirty years of war would sweep up the lives of the people who created modern science. The young French mathematician René Descartes, seeking truth where he thought it would be most to the fore, when people’s lives were at stake, went to the Netherlands to join the army of Maurice of Nassau. There he met other mathematicians, and eventually set off for Bohemia, to follow events there. On the journey there he was delayed by heavy snow, and sitting in an inn developed a vision of a new kind of knowledge, in which the heavens above and the earth below were united as part of a material universe that could be studied by mathematics.

The bishop in his tower

But just next door to the Earl’s Palace in Kirkwall, at the Bishop’s Palace, there was someone else who some decades before, looked at a bigger picture in Europe, in ideas as well as politics. Robert Reid, who built the Moosie Tooer there, became bishop of Orkney in 1542, and he carried out reforms of the clergy at St Magnus Cathedral and put in place an efficient and fair structure that helped it through the turbulence of the Reformation.

In his previous role as Abbot of Kinloss in Moray, he developed a high level of scholarship there, with scholars from Europe coming to lecture, and indeed it was a kind of small-scale university, in contact with work and people at the very cutting-edge of knowledge. One of the scholars who spent time at Kinloss, the Italian Giovanni Ferreri, dedicated a book in a foreword to Robert Reid. The book is about the work of another Italian scholar, a man so remarkable that his ideas could almost encapsulate the vision of the renaissance.

The man was Giovanni Pico della Mirandola, and he was born in 1463 in Florence and live only 31 years. He brought together ideas of the Greeks and other thinkers in a complete new philosophy, and he developed a new picture of the role of humans in the universe. The medieval church taught that we are fallen, the result of Adam eating the apple in the Garden of Eden. In this picture, we are bound down here in the earth, and can only look up the heavens to gaze on perfection, but are for ever condemned to be separate from it.

Pico taught differently. Humans, he said are somewhere between the mud below and the heavens above. We are, sadly, at risk of sinking down into the mud – but we are also – and here is the new territory that he opened up – we are also capable of rising to the level of the angels.

That new vision loosened a mental block in European thinking. It opened the way for humans to look deeply into the skies and think of them as terrain that is still unknown – but which we are capable of studying and understanding.

A book for the bishop

And one of the people who was deeply interested in the ideas of Pico, so much so that a book about Pico’s work was dedicated to him, was Bishop Robert Reid of Orkney.

Indeed when we look at Reid’s life, we see a man who wanted with whatever he touched to raise it to its highest potential. He did it with buildings – like the Bishop’s Palace – he did it with the gardens and orchards that he developed at the Abbey of Kinloss, he did it even with the level of harmony that he sought in other parts of his work which included law cases and diplomatic negotiations and his reforms of church organisation here in Kirkwall.

Robert Reid died in 1558 in France, one of the twelve commissioners negotiating the terms of the marriage of the future Mary Queen of Scots. His successor in Orkney, Adam Bothwell, was a scholar as well. Adam Bothwell’s sister married Sir Archibald Napier of Merchiston; and their son John was an inventor and a mathematician – the man who invented logarithms. John Napier published his discovery in 1614, and Kepler read the book two years later. He right away started to apply the techniques of logarithm tables to his astronomical calculations, and found that the techniques and insights applied so well that he was able to come up with a Third Law of planetary motion in 1619.

So in these two palaces, and in the lives of the people who dwelled in them, the events of the day in Orkney overspilled into events across Europe that are today the stuff of many hundred histories and right at the heart of the development of modern science. For the earl it was politics, and the opportunity to build a link with a Dutch ruler who was forging a Protestant alliance. For one bishop it was a family link that provided one of the greatest scientists of all time with an immensely powerful mathematical tool. For another bishop it was a vision that he shared of a new picture for humans, that is just as starkly important today as it was five centuries ago – to choose between sinking down into the mud or rising to hear the voices of the angels.