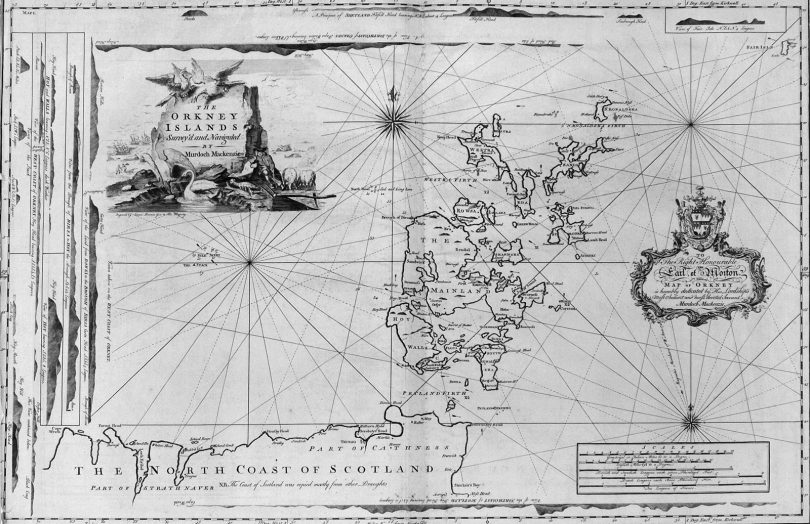 Orkney, given its modest size and population, has produced a goodly number of people who have made their marks on the wider world. Not so long ago, indeed, it was said that the principal exports of Orkney were eggs and professors, and within the lifetimes of many of us here today, the worlds of literature and the arts have been enriched by the likes of Edwin Muir, Eric Linklater, George Brown and Stanley Cursiter.

The nineteenth century produced galaxies of Balfours, Traills and Laings, many of whom made worthy contributions to the common weal, and of course there was John Rae, whose true stature as an Arctic explorer has only recently been recognised.

The man I would like to highlight today lived in the eighteenth century, coincident with the Scottish Enlightenment, and I would suggest that his contribution to his own, and succeeding generations, was such that he should be ranked as one of Orkney’s greatest sons.

From Kirkwall to Edinburgh

Murdoch Mackenzie was born, in Kirkwall, in 1712, in a house which stood on the corner of what we now call Albert and Laing Streets, on the site presently occupied by the branch of Santander. He was the great-grandson of Bishop Murdoch Mackenzie, who came to Orkney in the 1660s, and the son of James Mackenzie, lawyer and Town Clerk of Kirkwall. The family had the added distinction, if I may call it that, of owning the tunship of Grundwatter, on the north-east side of the Kirbister Loch.

In 1729, our Murdoch matriculated at Edinburgh University, and although no record of his graduation can be traced, it would seem that he did complete a course of study, as by 1734, he had returned to Orkney and had been appointed as the schoolmaster at the Grammar School in Kirkwall, this being at a time when he would have been the one and only master in the school. He is reported to have been ‘a learned, worthy and respected gentleman’, and he continued in this post until August 1739.

By then, his interests had turned elsewhere, and it seems that over the period from August 1739 to 1742, he may have assisted one Alexander Bryce with his survey of the north coast of mainland Scotland. Be that as it may, by 1742 he had certainly obtained surveying experience, and in the early months of 1743, he advertised, in the Caledonian Mercury, the foremost Scottish periodical of the day, his proposal to survey the coast of Orkney, ‘for the benefit and safety of navigation’.

He went on to say in his prospectus ‘all the rocks, shoals, soundings and courses of the tides will be justly marked and represented … so that a passage round the north coast of Britain which has hitherto been so dangerous and fatal to shipping, may hereby be rendered both safe and convenient’.

A main route for shipping

This proposal came at a time when the volume of shipping round the north of Scotland had greatly increased. As well as the ever-increasing level of trade around the coasts of Europe, and to the wider world, passage through the English Channel was all too frequently interrupted by times of war between England and one or more of her European neighbours. Merchant shipping increasingly came to use the northern route to voyage between the ports of northern Europe and the wider world.

The Pentland Firth was generally avoided, because of its fierce, and often unpredictable tidal streams, and because, in the days of sail, passage from east to west was into the prevailing westerly winds. In consequence, ever increasing numbers of ships made their passages through the channel, between Fair Isle to the north, and North Ronaldsay to the south.

The low elevation of North Ronaldsay, and Sanday, and the frequent poor visibility, be it due to sea fog, rain or wind-blown spume, led to many, many shipwrecks on these islands. The wreck on North Ronaldsay of the Swedish Merchantman Svecia, with loss of over 60 lives and a cargo worth approximately £250,000, which occurred in 1740, was all too fresh in the memories of the day, and had had a considerable impact on the London insurance market. It seems likely that this event was a factor in leading Mackenzie to the idea of his survey.

Mackenzie’s survey was to be financed by the soliciting of subscriptions, and most of 1743 he spent travelling the country, as far as London, seeking support. Eventually, he obtained 383 subscriptions, of which 119 were from merchants in Britain and Europe, 20 from seamen, 17 from titled gentlemen, 36 from the gentry and a splendid total of 75 from Mackenzies!

The Hudson’s Bay Company and the East India Company subscribed, and the Admiralty supplied, on loan, a theodolite (a fairly recent invention), a plane table, and an iron chain, of the standard length of 22 yards. By early 1744, he was ready to start work. Mackenzie set out, in detail, how he proposed to undertake the survey.

Starting from a baseline

He realized that before an accurate coastal survey could be done, there had to be a meticulous survey of the islands themselves. The only maps of Orkney in existence made no claim to accuracy, individual islands bore scant resemblance to the outlines we are familiar with today, and many of the smaller holms and skerries were altogether absent. Such marine charts as did exist were little more than sketches of the coastline, taken from boats and based on compass readings, if indeed any instruments had been used.

To rectify this state of affairs, Mackenzie’s first aim was to prepare an accurate map of the islands within the Orkney group, following which he would carefully plot the position of the offshore rocks and skerries in relation to the neighbouring land masses. His survey was to be by a system of triangulation, using his theodolite to measure the angles between each end of a base line, and a prominent feature in the landscape, perhaps a beacon on a hilltop, a coastal feature, or even a readily identifiable building, and thereby calculating by trigonometry the distances between these points.

To start this process, he required a measurable base line, and the longer this was the easier it would be to make the necessary observations. It so happened that early 1744 brought a period of keen frost to Orkney – so keen, indeed that the Harray Loch froze over, and Mackenzie was able to lay out a straight line and measure it with his chain, establishing a base line 3 and ¾ miles long.

From this base line he calculated the distances to and between several landmarks, and thereafter from these landmarks he laid out a series of primary and secondary triangles covering the whole of Orkney, enabling him to produce a map of the islands far superior to anything which had appeared before. He then took further observations from a boat manoeuvred to the ends of offshore rocks and skerries, and plotted their positions accurately in relation to the adjacent island shores.

The directions and strengths of tidal flows around and between the islands were recorded, and a series of soundings made to indicate depths of water and nature of the sea bottom where shoals or shallows were present.

Finally, Mackenzie realised that seafarers’ first sight of land might well be when they were dangerously close inshore, and it was therefore of paramount importance that they were able, from his chart, to identify quickly the island they were approaching. His charts therefore included the prominent features visible from the sea, the hills, the notable buildings etc. on all the islands.

At that time most of the Orkney landscape was heather moorland, but here and there were the townships, where land had been brought under cultivation, and which stood out as patches of green, defined by their encircling ‘hill dykes’ amidst the brown of the moorland. Mackenzie indicated these colour distinctions on his charts, and these charts, designed and intended for the use of mariners, have the added benefit of being, for us, the best evidence we have for the overall appearance of the Orkney landscape in the mid-eighteenth century.

Following his survey of Orkney, Mackenzie proceeded to a similar exercise in Lewis, and in 1750, his efforts culminated in the publication of his work entitled  ‘Orcades –a geographical and hydrographical survey of the Orkney and Lewis islands’.

The first part of this work contains a lengthy description of the islands and their surrounding seas, and includes much information of value to seafarers unfamiliar with the area. In general, he concludes that most of the coast of Orkney should hold no great terrors for seamen, as by and large the coastline is elevated sufficiently to be readily visible for some distance offshore.

The exception he stresses, however, is the north-eastern corner of the archipelago, Sanday and North Ronaldsay, and one of his recommendations is that a light be established on North Ronaldsay. Forty years were to pass, with many more shipwrecks on these islands, before the newly formed Northern Lighthouse Board commissioned the building of the original lighthouse on Dennis Head on North Ronaldsay. The site of this lighthouse was chosen after careful study of Mackenzie’s work.

The main part of ‘Orcades’ consists of a number of charts covering the entire Orkney group and the northern part of Lewis. The Orkney room in the County Library has a copy of this work, and it is well worth going to take a look at these charts, which contain so much fascinating information. Townships mapped out and named, main houses marked, extremes of high and low tides, directions and force of tidal stream – even good fishing locations and types of fish present are indicated. These charts were far superior to anything which had existed before, not only for Orkney, but for any part of the British coastline, or, indeed, anywhere in the world.

The British Admiralty was so impressed with Mackenzie’s work that he was appointed Surveyor to the Admiralty, and commissioned to survey the entire west coast of Great Britain and Ireland, from Cape Wrath to Pembrokeshire. Following this, he published his ‘Treatise of Maritime Surveying’, which remained the standard work on the subject until well into the nineteenth century.

He retired in 1771, being succeeded as Admiralty Surveyor by his nephew, also Murdoch Mackenzie. In 1774, he was elected a Fellow of the Royal Society, a fitting culmination to a brilliant career. Interestingly enough, he had had earlier contact with the Royal Society, having delivered to that august body, in 1749, a paper entitled ‘The State of the Tides in Orkney’. His retirement was spent in Hampstead, and latterly at the home of his nephew in Minehead, Somerset, where he died in 1797.

Murdoch Mackenzie established standards in maritime surveying which were not surpassed for more than a century. In my modest estimation, he truly stands as one of Orkney’s greatest sons.

The late Bill Groundwater was for more than thirty years consultant surgeon in the Balfour Hospital; where he also was born and died. He grew up in Stromness, where his father was headmaster of Stromness Academy and his mother became the first woman Provost of the town. A keen member of the Rotary Club of Orkney, he was the prime mover behind the 1991 lorry convoy which took food, clothing and medical supplies to Romania at a time of hardship there.