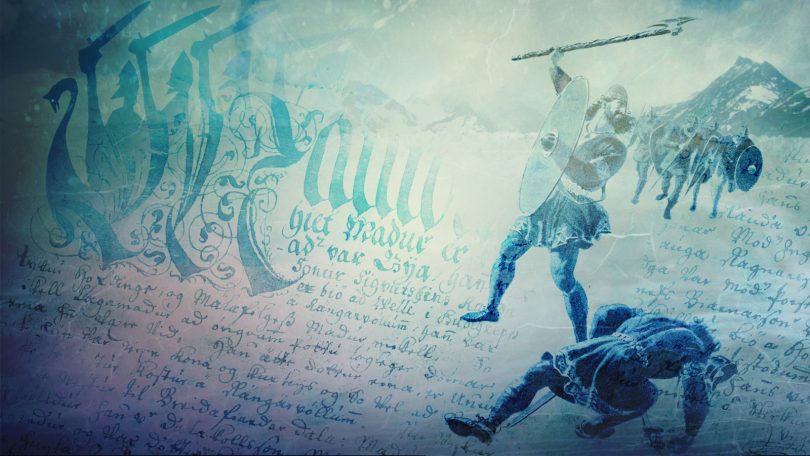 To sit, for instance, in the hall of Earl Sigurd himself, on Christmas Day 1013. To see the men gathered along the tables, and at the far end of the hall the table of the earl himself; though today he is not in his high-seat – that is given to a special guest, King Sigtrygg of Dublin. Earl Sigurd sits on one side of the king; on the other is Earl Gilli of the Western Isles, married to the Orkney earl’s sister.

The followers of King Sigtrygg and Earl Gilli sit on one side of the great hall. On Earl Sigurd’s side the company includes a group of Icelanders. Every seat in the hall is occupied.

The Icelanders are of much interest, as they have arrived as exiles. They were involved in their homeland in the killing of a great and good man and his family, whose house they surrounded and burned down. Among the Icelanders is Flosi, the leader of the group. King Sigtrygg and Earl Gilli want to hear the story, and another of the Burners, Gunnar Lambason, is chosen to tell it, and a chair is placed for him to sit on.

He tells how they gathered at the house at Bergthorsknoll to take revenge for a killing by the sons of the old man who lived there, Njal, and how the Njalssons, formidable in the open, had been brought indoors by their father and were trapped when the house was set on fire. And Gunnar, who had stood outside, taunting those within as the smoke and flames spread, is now embellishing the story.

What neither nor anyone else in the hall knows is that outside the door, listening to every word, is the one man who escaped from the blazing house. Kari Solmundarson’s connection with the Njalssons had begun years before, when he was in Earl Sigurd’s service and collecting tributes from Earl Gilli in the Western Isles. Two of the Njalssons, Helgi and Grim, were on a trading ship in The Minch that was under attack from a group of Viking ships and Kari had rescued them. They accompanied him back to Orkney and joined Earl Sigurd for a time, and had distinguished themselves in campaigns on mainland Scotland and as far south as the Isle of Man.

Eventually Kari, now a staunch friend, went back to Iceland with them and married their sister Helga; and he and his wife were in the house at Bergthorsknoll when the Burners set it alight. She was allowed to leave along with some of the other women. He, inside amongst the flames, saw a blazing crossbeam fall and provide a route to the roof. He ran up it and with the smoke now so thick that no one could see him, leaped out with his clothes on fire. Since that day he has been pursuing the Burners with a relentless determination, and has followed this group to Orkney.

So now he bursts in through the door of the hall with his sword drawn and cries out the truth to the stunned audience – then runs the length of the hall and strikes Gunnar Lambason a great blow that sends his head flying on to the table in front of Earl Sigurd and his guests.

By now it should be clear that we are listening to an eyewitness account – or at least to someone who has gathered the detail from some of those in the hall when it happened. And we have indeed a written account of what happens next.

Earl Sigurd recognized the man who had done the killing and cried, ‘Seize Kari and put him to death.’

Kari had been a member of the earl’s retinue himself and was well liked by everyone; and no one stood up to carry out the earl’s order.

Kari said, ‘Many would say, my lord, that I have done you a service, by avenging your retainer Helgi Njalsson.’

Flosi said, ‘Kari has not done this without cause. He is not in any settlement with us, and he only did what was his duty.’

Kari left the hall, and no one went in pursuit of him. He and his comrades went down to their ship. The weather was good, and they sailed south to Caithness and went ashore at Freswick to the home of a worthy man called Skeggi, where they stayed for a long time.

In the earl’s hall in Orkney, the tables were scrubbed and the dead man carried out. Earl Sigurd was told that Kari and his companions had sailed off south to Scotland. King Sigtrygg said, ‘That was a resolute man, to act so boldly and give no thought to his safety.’

‘There is no one like Kari for courage,’ replied Earl Sigurd.

Flosi now took it upon himself to tell the story of the burning. He gave every man his proper due, and this account of it was believed.”

But how did it all start, the fatal chain of events that led to honourable men of both sides dealing out death? The whole story is told in Njals Saga, put into writing in the 13th century, with a classic translation made by Magnus Magnusson and Hermann Pálsson for the Penguin Classics paperback published in 1960.

The saga is gripping, starting with events that seem small, but they build up like little streams of snowy meltwater from a glacier to form a river that sweeps people away in its currents. The saga writer paints pictures of men and women of courage and character and of others who work to undermine them, and it rises to heights that are simply elegiac.

And from the scene in Earl Sigurd’s hall on Christmas Day 1013 the fast-flowing river of events surges on into a new direction. For the mission of King Sigtrygg of Dublin is to draw Earl Sigurd into a conflict in Ireland, to overthrow the high king Brian Boru; and on Good Friday, 23 April 2014, the forces face each other at Clontarf, just north of Dublin, between the rivers Liffey and Tolka.

It is on to Clontarf on Good Friday that the lives of so many people converge, drawn in like flotsam to a great whirlpool, or like flies in a great spider’s web. Indeed the saga writer tells of a vision seen in Caithness, of a great web of fate woven by twelve women, with the threads in the web the lives of men.

And this is the deep philosophical question that the saga raises: are all the events around us shaped inevitably, consequences of a long causal chain stretching back into the past? Or could it be that they are being somehow drawn forward on to a fixed and unavoidable point of attraction in the future? And wherever the source of the flow may lie, have we no choice in the matter, or can we somehow raise ourselves up above the current of events, to change the course of the river, or at least to go down with honour, so that all the best values of life remain in the memory of those who hear the story a thousand years on? Njals saga raises deep questions about the nature of causality and the nature of time, and it catches up the reader in its flow.