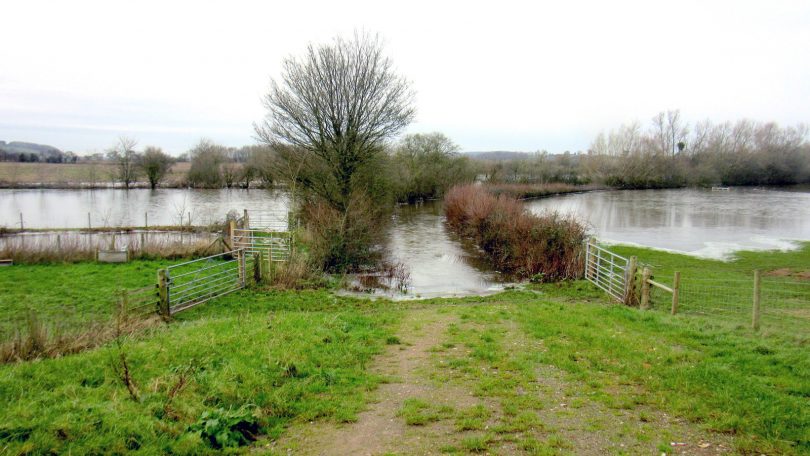 The Green Lane at flood time

My father, John Somerville, was sent to the Royal Naval College at Dartmouth at the age of 13, and joined the Royal Navy when he was 17 years old,” writes Christopher Somerville in the introduction to his book The January Man. “He served in a destroyer in the Mediterranean through some of the worst and bloodiest months of the war, and never spoke about it. After the war he left the Navy to join Government Communications Headquarters (GCHQ), the secret establishment in Cheltenham, and never spoke a word about his work there. It was walking together that brought us closer. Walking promoted talking, and in the end produced a kind of understanding we came to value.” In the book he looks back at his relationship with his father as he walks through the seasons of today.

New Year at The Leigh, and Blacksmith Lane is six feet deep in floodwater. Roo and I can only stand and stare. King Severn has launched his annual invasion of the Gloucestershire village where we grew up. His summer bed lies under Wainlode Hill, more than a mile away across the fields, but now the houses along Blacksmith Lane have their toes in Severn’s water. The flooded lanes are crazed with paper-thin ice. Bubbles stand frozen stiff in the ditches, and the roadside grasses are knotted together like lumpy dreadlocks under a milk-white skin.

Roo pauses at the edge of the flood. I’ve known him, my friend of longest standing, my brother in all but genes, since I was three years old. What does a gentleman of settled habit and sixty-something years do now? He forges in for old time’s sake, crackling the ice as he goes. Beside him I wade, step for step, till the water is within a couple of inches of my wellington tops and the pressure is beginning to compress the rubber round my shins. We stand like two old herons, up to our knees in the floods. I bend and scoop up a parallelogram of fractured ice, thinner than a pane of glass. I grin at Roo, and touch it to my tongue. 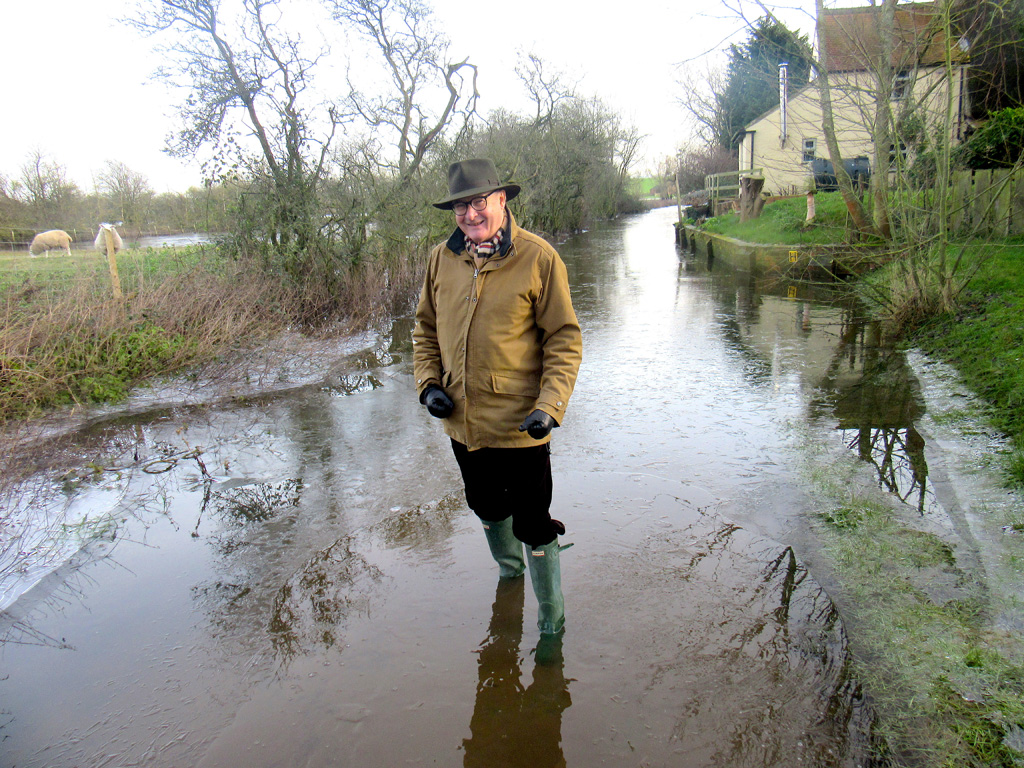 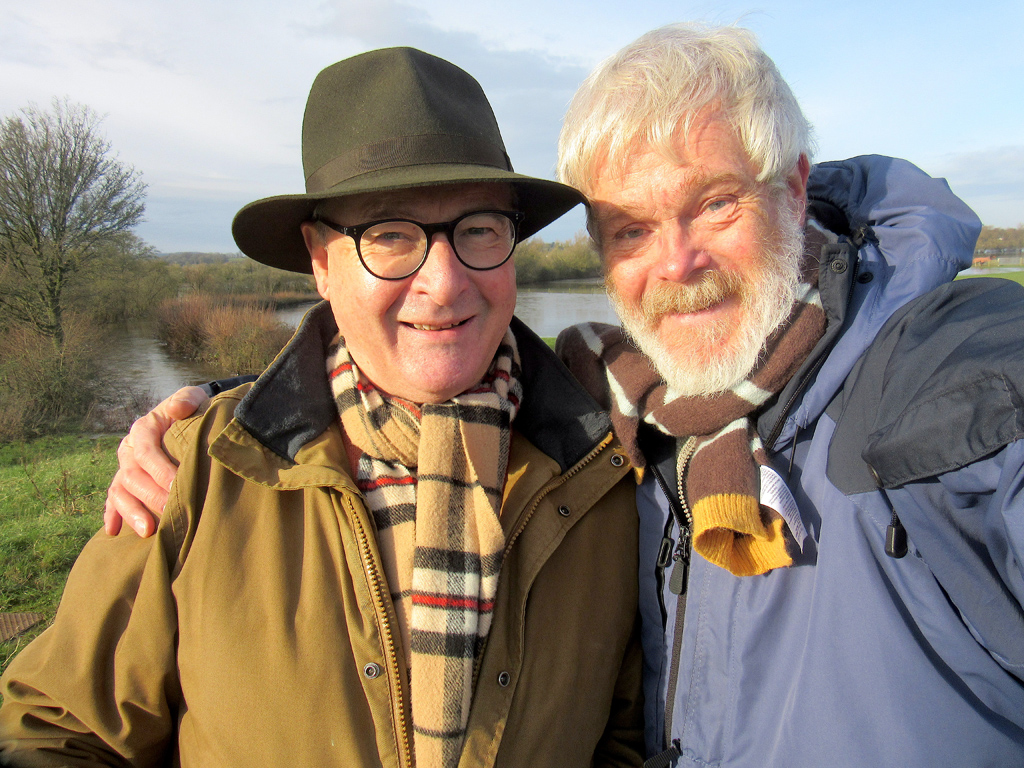 Earthy, cold, metallic, drying the saliva like the touch of a sloe. A spoonful of floodwater slops over the rim of my right boot. Instantly it’s 1957. I am seven years old, sloshing home along the road in gumboots full of floodwater, listening to them squelch. I stop by our gate at the top of the hill, hopping from one foot to the other, and take the gumboots off to reveal sodden socks, the grey wool dark and dripping. I tip my left boot up and pour out a stream of water onto the grass – a satisfying little cataract, brown and foot-warmed. It smells of cows and earth, but it looks like weakly made Ovaltine. What does it taste like? I take off the other boot. It’s funny how the water come right up to the top when my foot’s inside, but disappears halfway down when I take it out. I reach a finger down into the boot and bring it up dripping. Into my mouth it goes. Mmm. Not very nice. Now I know something even Daddy doesn’t know. I’m pretty sure my best and only friend Roo has never tasted floodwater either – although, knowing him, I wouldn’t absolutely bet on it. 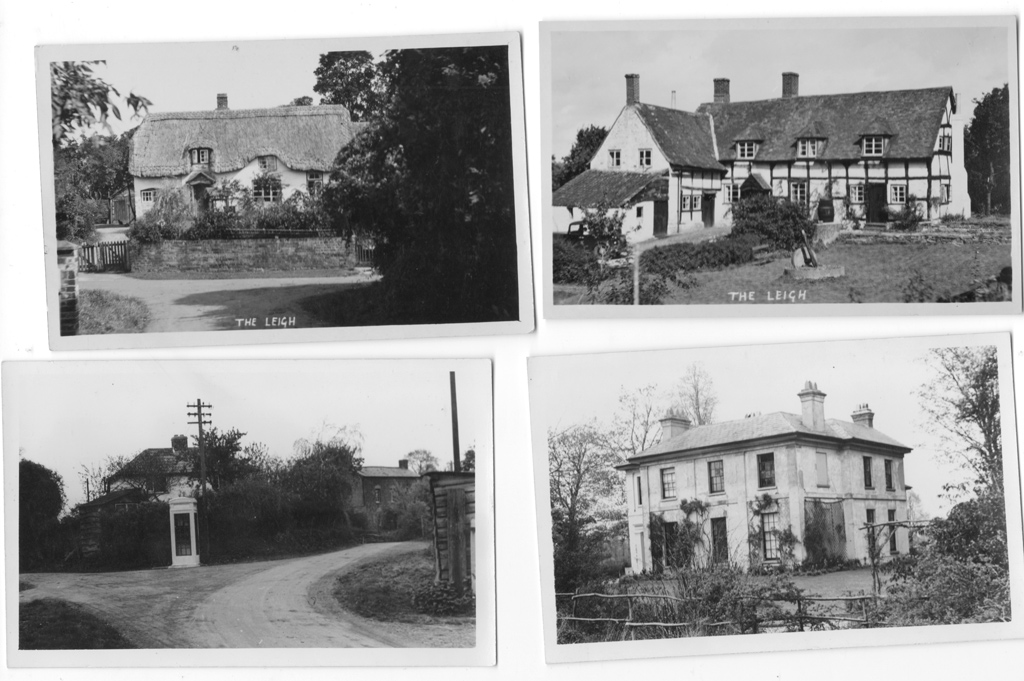 Our family came to live at The Leigh when I was three, in the flood winter of 1952. The Leigh, down in the flatlands beside the River Severn, was everything that the villages high in the nearby Cotswolds were not. It was remote, a modest community of small-scale farmers on a lane to nowhere. It was self-effacing, turning its back on the main road to Gloucester and Cheltenham. It was so unfashionable as not even to exist on the social map of Gloucestershire. No-one went riding or hunting or waltzing at The Leigh. No-one stamped about in gymkhana boots or admired themselves in shop windows. Scattered along the lanes was a handful of mixed farms – corn, cattle, geese – and one or two smallholdings. A church where some relation of Dick Whittington was said to have been baptised. A tiny primary school, destined only to last another ten years; a tiny shop in a crookback cottage. That was it for The Leigh.

We lived on a ridge at the entrance to the village in a draughty former vicarage, Hoefield House. Done out in dark brown paint and wartime blackout curtains, it was a gloomy lair when we arrived in midwinter. Mum soon had it cheered up with white walls and flowers and bright sofa covers. I had my elder sister Julia to squabble and snigger with and a big garden to play in, but only Roo for a friend. Roo lived the best part of a mile away in an ancient black and white farmhouse called Cyder Press, down where a straggle of red brick houses and half-timbered cottages circled round a loop of lane. As soon as my mother judged me old enough to be out of doors on my own – probably at six or seven years old – I was pelting down to Cyder Press day after day, to escape with Roo into the promised land of the ridgy fields beyond. That was flood country, the January realm of King Severn at his maddest; a no-man’s-land where you could chew sour cider apples from the abandoned orchards and taunt the cows into giving chase, where you could run unsupervised across the Big Meadow as far as your gumboots would let you. For a restless little boy with a super-heated imagination and a proper partner-in-crime to call on, it was pure heaven. And I could get to heaven on my tricycle in fifteen minutes, barring accidents.

When I got to school I found that all the other children knew what their fathers did. Fathers sold things in shops, or pulled out people’s teeth, or ploughed the fields and scattered, or were away fighting for the Queen. My father was different. He drove off in the car every morning to work in Cheltenham. He came back home at night, mostly, unless it was one of the times when he was away somewhere abroad, wherever that was. What he did for a living, though, was a mystery.

‘Daddy, where do you work?’

‘I work at the office’

But then almost everything to do with grownups was a mystery.

Roo and I decide to start today’s perambulation at St Catherine’s church, up on high ground, and to beat the bounds of our childhood along the village lanes and field edges as far as the floods will allow us. Wandering round the churchyard before we start, I get a shock. Almost all the folk who peopled my boyhood at The Leigh are here, neatly stretched out under headstones marked with information about themselves that I can scarcely credit. They seemed as old as the hills to me back then, but these dates say that they were in their twenties and thirties, most of them, when I first knew them – the age that my own children are now. The Quembys and the Theyers. The Troughtons and the Poultons. The Westons, the Teakles, the Chandlers and the Freemans. I have hardly given a thought during my adult lifetime to these people who formed my view of what people should be.

As we set off from the churchyard towards the village, the January ghost of my father comes striding energetically towards us along the well-worn road in a heavy blue winter coat. Under the coat he’s wearing one of his father’s old suits with flapping lapels. His tie is neatly tied, his dark hair well disciplined, his black shoes impeccably shined. Some nonsense or other back at Hoefield House has made the family late for church, and Dad’s sense of duty has driven him out ahead of his flock to walk the road alone, striding himself free of irritation. ‘I remember how your father used to step out on his way to church,’ says Roo, ‘big long strides, all chin up and shoulders back. No-one else walked like that.’

We pass the red brick house where green-fingered Harry Wilks lived. Harry’s wife had the beautiful name of Marguerite. Harry invariably made a clean sweep of the cups at the horticultural show; Marguerite provided the village with new-laid eggs, half a dozen a time in a brown paper bag. Just beyond the Wilks house the tributary lane from the lower village comes in on the left. Opposite the junction is the big field where Roo and I once sat on the gate and watched a two-horse team harvesting with a reaper-binder. One of the horses was called Blackbird – Blackie for short – and wore a little straw hat with holes cut out for its ears to poke through. The reaper-binder had a clattering drum of whirling wooden bars that fed the harvest to the cutter and on up into the belly of the machine, which simultaneously ejected a line of neatly tied bundles of corn onto the ground. These were forked up into conical stooks once the field was cut, and left for a cart to gather before the rain set in. The Leigh must have been just about the last place in Gloucestershire to use such antiquated machinery and methods at that date. It was a different world down our lane. 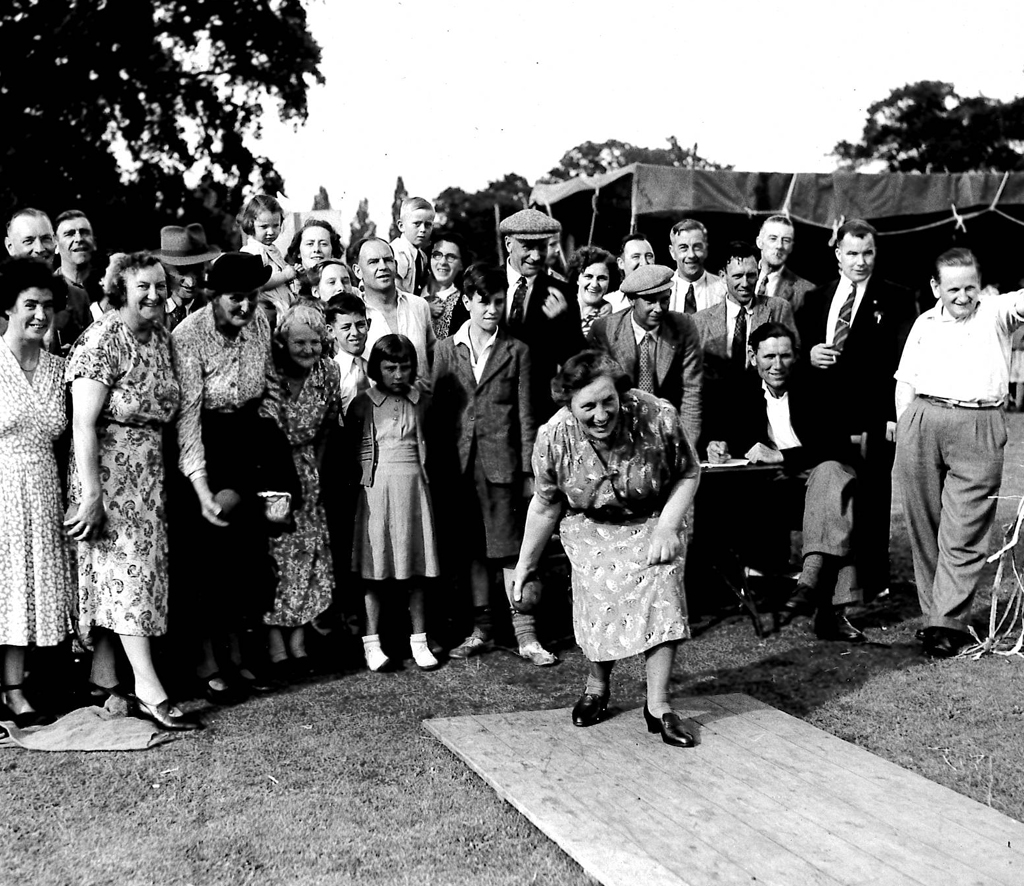 From the junction by the harvest field my way home lay straight ahead, past the village school and up the slope. The crest of the ridge overlooked the main road, the A38, where Austin cars and AEC Mammoth Major lorries and Midland Red buses hurtled noisily along from Gloucester to Tewkesbury. On the ridge stood Hoefield House, its feet well out of the floods. I passed it earlier this morning, shut away behind large electronic gates in a cocoon of trees laden with mistletoe. We won’t get a welcome there today. Instead, Roo and I turn our backs on the harvest field and trudge down the long road towards Cyder Press.

Christopher Somerville has covered the length and breadth of the UK on foot, and has written and broadcast about its history, landscape, wildlife and people for over 25 years. He is the walks correspondent of The Times, and has thirty-six books, hundreds of newspaper articles and many TV and radio appearances to his name.