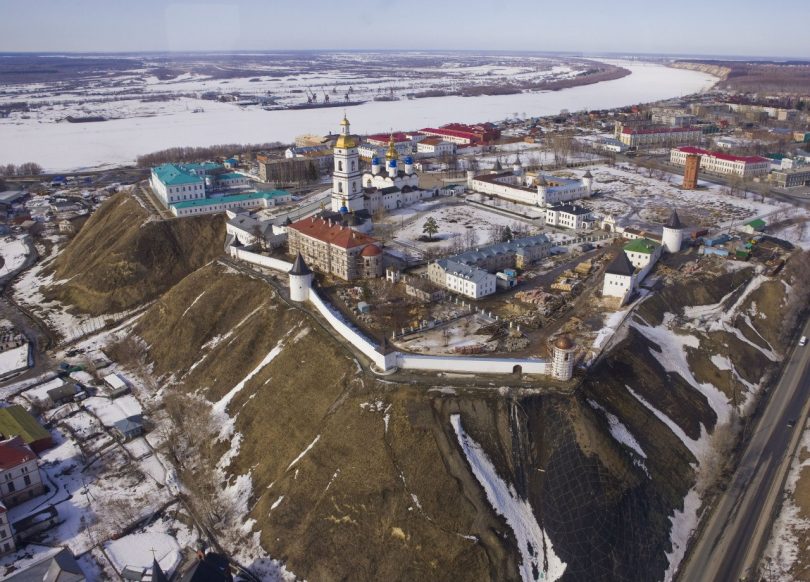 Dmitri Ivanovich Mendeleev was born in 1834 in Siberia, in a village near the town of Tobolsk.

His father Ivan was a school principal. His mother Maria came from a family of merchants who had founded the first Siberian printing house.

Tobolsk is situated where two rivers meet, with trade routes east to China, and southwards to Central Asia. It had Siberia’s first school, theatre and newspaper, and also for a time the Governor-General of Western Siberia. The former Governor-General’s house in Tobolsk was where the Tsar and his family were sent in the Russian Revolution.

Also from that period, Grigori Rasputin was born near Tobolsk.

The start of the journey

Dmitri Ivanovich was the youngest of 17 children, and raised as an Orthodox Christian. His mother encouraged him to “patiently search divine and scientific truth”.

But his father became blind, and his mother had to restart the family’s abandoned glass factory. By the time that Dmitri Ivanovich was 13, his father had died and his mother’s factory destroyed by fire. Two years later she took him on the long journey to Moscow for higher education.

But Moscow University said no, so they went on to St Petersburg where his father had studied. After graduating, he contracted tuberculosis, and had to move to the Crimean Peninsula on the Black Sea. While there, he started teaching science in a high school, and in two years he was back in St Petersburg with health fully restored. It was now 1857.

He began to move forward rapidly in the field of chemistry. He carried out research, he was appointed professor at St Petersburg University and he published an award-winning textbook.

A pattern for the elements

By now there were 56 known elements, with a new one almost every year. Some people had seen patterns and were trying to put it on paper. Mendeleev was writing a new textbook for one of his courses, and thinking about possible patterns. Then one night it became clear.

I saw in a dream a table where all elements fell into place as required. Awakening, I immediately wrote it down on a piece of paper, only in one place did a correction seem necessary.”

His table had two dimensions – chemical characteristics, moving from left to right; and atomic weight, going up all the time, as row after row was filled.

Secondly, he highlighted gaps where no element existed. There were eight, for instance in the silicon and aluminium columns, and he gave the missing elements names like eka-silicon and eka-aluminium.

This gives a clue to another influence. Eka is the word for the numeral ‘one’ in India’s ancient language of Sanskrit.

A friend of Mendeleev – Otto von Böhtlingk – was a scholar of Sanskrit, and writing a book about a great Sanskrit linguist of the 4th century BC – Pāṇini – who had classified the sounds of Sanskrit in an advanced way. It was more advanced than any Western theory, and it involved laying out the sounds in a two-dimensional table.

As time went on, his predictions were confirmed. For instance, with the gap for eka-silicon, he had been precise. Look, he said, for something of a mass of 70 units, a density of 5.5, a high melting point – and grey in colour. That was in 1869.

Seventeen years later the German chemist Clemens Winkler studied a new mineral from a silver mine and found that when he removed the silver and sulphur something still remained. He purified this – and discovered germanium, element number 32: mass 72.6, density 5.35, melting point 947 degrees – and colour grey.

By now Mendeleev had carried out much other work. He was interested in petroleum. He investigated its composition and helped to found Russia’s first oil refinery. He recognised its importance as a feedstock for petrochemicals. Burning petroleum as a fuel, he said, “would be akin to firing up a kitchen stove with bank notes”.

He wanted to improve Russian agricultural productivity, and measured the value of chemical fertilisers. He left the university in 1890 in support of students’ rights and freedoms, and later, as the director of the Central Bureau of Weights and Measures, he introduced the metric system to Russia.

He received numerous awards – but not the Nobel Prize. The Nobel Chemistry Committee proposed him in 1906, but two Swedish chemists nominated a Frenchman instead – and they persuaded the Royal Swedish Academy of Sciences by a majority of just one vote. A second attempt in 1907 was also blocked, and in that year he died.

One of his daughters became a well-known actress and married the great Russian poet Alexander Blok, one of a golden generation including Boris Pasternak. Some lines from Blok could be a summary of Dmitri Ivanovich Mendeleev’s amazing achievement, pressing on through all challenges to discover the periodic table: