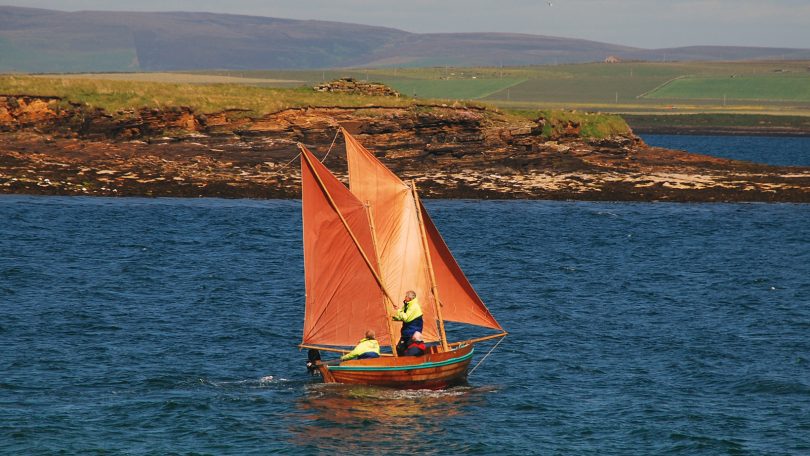 We know that 200 years ago the young John Rae learned to sail in one and that he had similar boats built in Canada for his early Arctic explorations for the Hudson’s Bay Company, and we know that we exported them to the Western Isles of Scotland in the century before that.

Their origin is lost in the mists of time but they have certain features that we can trace back to the Norse era – their cross-section shape and their keel-joint construction.

The names for boat parts go back to the Old Norse language too – bilge-kod (bilge keel), helwel (holywale, the rubbing strake on the outside of the gunwale), hunnyspot (beasthook – the triangular knee that joins the two gunwales at the stem-head), tholepin (the pin style of rowlock). Of course we store them in a noust (‘ou’ as in out). In Norway they spell it naust.

One yole, of course, is not like another, for despite their distinctive shape there are subtle differences between different builders, and the North Isles yole is somewhat different in design and construction from the South Isles model. The Stroma yole is related to the Orkney boats but has a fuller shape and is usually bigger and of heavier build. It is said that the Stroma men learned their boat-building skills in Orkney.

Basically the yole is an open boat of generous beam and pronounced sheer-line.   She is sharp at both ends and constructed of ten or eleven strakes per side. She may or may not be fitted with side decks. The South Isles yole has a pronounced rake both fore and aft and the North Isles model has noticeably less rake forward.   Twentieth century boats usually had steam-bent timmers (ribs) but the older boats had fitted timmers. That is, they were cut to fit from ‘grown’ (naturally curved) pieces of timber.

The main constructional variance between North and South Isles boats is in the fitting of the timmers. The South Isles boat has a long timmer reaching right across the boat from gunwale to gunwale alternating with a timmer from each gunwale down to near the keel, where it terminates. The North Isles boat is more spartan. The timmer that crosses the floor reaches only a little more than halfway up the sides and the adjacent one reaches from the gunwale to just over halfway down, so that alternate timmers overlap by one or two strakes.

For information on Stroma yoles, see Stroma Yoles by Alastair Walker, published by The Orcadian.