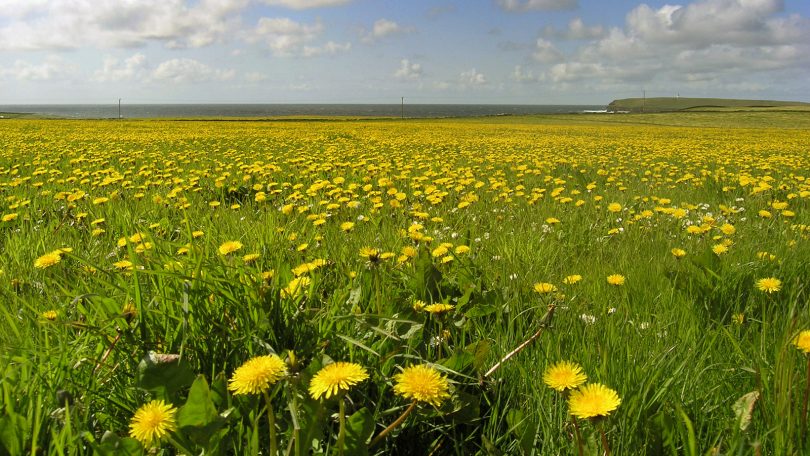 Field of dandelion in Orkney

Perhaps not a lot these days, but you might be surprised at the concoctions used and the reasons behind using them several hundred years ago.

According to herbalist and ethnobotanical researcher Anna Canning, our knowledge of our own bodies and our ability and confidence to look after them has been gradually eroded over the years with the loss of a common folk knowledge base, which is still strongly present in many other European cultures.

Determined to return this knowledge where it belongs – with people and communities – Anna gives many talks and workshops on how it is possible to include simple herbal measures in our daily life to help our health.

A tradition of herbal medicine

It was while working as a translator and living abroad in countries such as France, Spain, Germany, the Czech Republic and Hungary that Anna realised most people in these countries still had a living knowledge of plants in their local area and that folk medicine was highly regarded and valued, playing an important role in everyday healthcare.

A degree in interpreting and translating from Heriot-Watt University had opened the door to living abroad, learning the way of life and traditions, and she found herself becoming fascinated by the fact that simple remedies were used to treat minor ailments and complaints, which back home in Scotland would normally have meant a visit to the doctor.

I would quite often turn up at someone’s house with a sore throat and they would offer me a tea made with plants that perhaps their mother had collected that morning,” she says.

I grew up in the east end of Glasgow, which was not renowned for its herbal medicine! – so I’d accept the offer to be polite, but gradually I realised what a fantastic resource it was and a really powerful tool for self-care. Instead of running to their GP for the slightest little thing, people looked in their kitchen cupboards or outside their back doors.”

She was impressed by the knowledge people possessed about where certain plants grew, when and how to harvest, process and turn them into useful remedies. They didn’t use field guides or possess botanical field survey skills. In fact in many cases they didn’t even know the botanical names of the plants, but they had a practical and working knowledge of them and how to use them, that has been lost to us in the UK.

A stronger connection with the environment seemed to go hand in hand with this knowledge, she noted, and nature was viewed not with suspicion as something you had to protect yourself from, but as a friend.

People grew their own vegetables in spring and summer and knew how to preserve and store them for winter. They had a self-sufficiency and independence which fascinated her.

It was an impression which remained with her after she returned to Scotland and gradually deepened and developed after her children were born, so she decided to pursue it.

I’d heard about a degree in Herbal Medicine at Napier University so I went along and had a casual conversation which resulted in an invitation of a place on the course. It was a life-changing moment for me.”

Much as she enjoyed the course, she also realised that her own particular interest in finding out about local plants, weeds and habitats was not being expanded.

She felt the study was heavily geared towards clinical practice whereas she was looking for more information about other ways of using that knowledge.

We are all suckers for the exotic so we were learning about Chinese medicine, using manufactured products. We were also working with diet and nutrition but very much from the modern nutritionist mode, telling people to buy vitamins and supplements.”

Anna wanted to learn more about how to identify local plants, what was available in different habitats and how to harvest and process them into useful remedies.

After graduating she worked for a time running a clinical herbal medicine practice which she describes as ‘a privilege in every way’, but she grew to discover that her true passion lay in community education.

Her mission is to give local knowledge back to the community so that people once again have the confidence and skills to do things for themselves, whether that is using green spaces, going for a walk, going on the canal, appreciating the natural environment, treating it with respect and realising that it is not a hostile place.

She is also concerned about how we are fed information by the media, particularly about health and the economics behind it.

Among the workshops she runs is one on honey and herbs. She describes the anti-bacterial properties of honey and shows how it can be combined with other ingredients to make simple remedies and balms.

Being able to do that for yourself and seeing how it is done makes you realise that the items you see in the shops are overpriced, oversold and we are being ripped off.”

The subjects of her talks include ‘Making Up the Renaissance’. This is based on research she carried out a few years ago into how to interpret looks and expressions in Italian Renaissance paintings.

She examines not only the ingredients used in recipes and potions but also the layers of symbolism, planetary influences, humoral philosophy and alchemical-style experimentation.

These days Anna is looking at the possibility of setting up a social enterprise with a couple of colleagues to be able to offer a wider range of resources to more people, particularly charities and community groups who might be strapped for cash.

She describes her work as plugging a gap somewhere between the Ray Mears / Bear Grylls survival skills and fashionable foraging which can lead to stylish restaurants serving weeds with an expensive price tag.

It is great to see weeds and ordinary plants recognised as useful and valuable, but at either end of the spectrum these organisations are not putting the knowledge back where it belongs and that is the gap I am trying to fill.

This is people’s food and people’s medicine. Foraging is something that people and animals have always done. It is nibbling berries, brambles, petals, not collecting stuff in order to sell massive quantities of it or to serve up exquisitely presented expensive meals. It is something you add in small quantities and it is fantastic, it is nutritious, rich in vitamins and minerals. You really give yourself a boost, just by nibbling from the hedges.”

Here is her talk from the 2017 Festival.