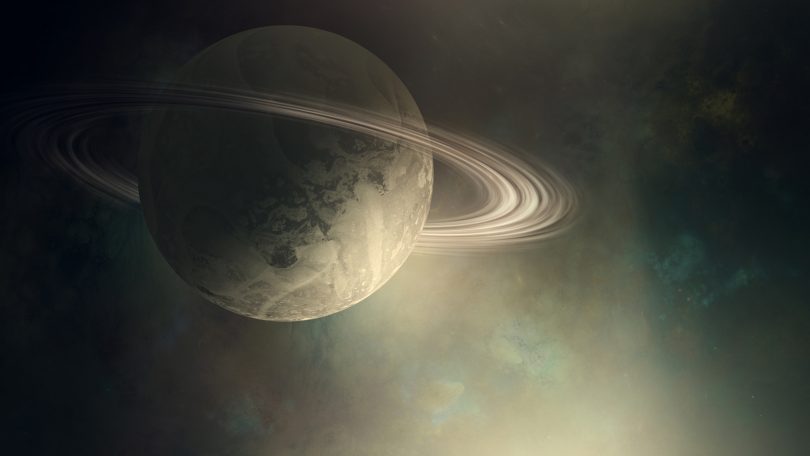 Saturn’s largest moon Titan has been enigmatic since it was first spotted by Dutch astronomer Christiaan Huygens in 1655.   However, it only got it impressive name 150 years or so later with a spark of inspiration from John Herschel, whilst sailing past the Cape of Good Hope in 1827. The name Titan was pretty spot on, as it is one of the largest moons in the solar system and larger than our own moon.

The interest in this moon stepped up further when astronomer Gerald Kuiper revealed that it was cloaked in an atmosphere.  Since he first observed the atmosphere in 1944, we’ve discovered that Titan’s atmosphere is so thick it generates a surface pressure slightly more than ours on Earth does.  Kuiper even detected methane in the atmosphere of Titan, a bit of a puzzle as without a source replenishing this gas it should have broken down long ago.  So from its discovery in 1655 up to 2004 a picture of a frigid moon, shrouded in a thick atmosphere and with a mysterious source of methane, was built.

What happened in 2004? That’s when the joint NASA and European Space Agency (ESA) mission Cassini-Huygens arrived to orbit Saturn and investigate the gas giant and its moons. And it is still there – well the Cassini part is, entering the swan song of its mission before its ultimate doom in the clouds of Saturn in 2017.
Since they arrived in the Saturn system, Cassini and Huygens have only added to our wonder of the icy moon Titan, revealing it to be a complex and unique place. Aside from discoveries of volcanoes, weather and complex organic molecules, one of the most exciting developments in the mission was the observations of lakes across the Titan surface. Dotted all over the surface and in many shapes and sizes, some are big enough to have been named seas, or Mare. Being so far from the sun the average surface temperature of Titan is a chilly -194°C. So rather than water, these lakes and seas are probably made up of mixtures of methane and ethane.

And this is where the new mysteries start.  We’ve had hundreds of years to piece together the way minerals interact and shape our landscape on Earth, but we are just beginning to understand how these processes work on Titan.  Despite the strangeness of materials that make up Titan’s surface, many of its features are distinctly Earth-like.

As well as seas, lakes and rivers, we have seen weather on Titan – clouds forming and rain falling, completing the ‘hydrological’ cycle.  But here is where it gets very odd.  Despite the familiarity of the features we see on Titan, the materials that make up them are very strange indeed.  Methane and ethane are gases on Earth, but solidify under the cryogenic temperatures of the surface of Titan.  We don’t understand how these small molecules combine with other chemicals found on the surface, like hydrogen cyanide, acetylene and benzene at those temperatures.  And we certainly don’t understand how these can all form the features we have seen on Titan.

So we turn to the laboratory, and start trying to re-create the conditions of Titan back here on Earth.  One part of these investigations has been to try and investigate what sort of materials could form the deposits found round the shores of the lakes and seas of Titan.  These deposits, that were noted by Cassini, seem very like the salt flats that surround some of our lakes on Earth.  What combination of the small molecules found on Titan would combine to make a solid material at those conditions?

Scientists from NASA’s Jet Propulsion Laboratory have been hard at work trying out many combinations of Titan materials.  And they’ve had some success, discovering a new material that forms between ethane and benzene at the temperatures of Titan’s surface.   It is though that this mixture of materials could occur at the edges of the lakes of Titan, and so could make up the ‘sand’ that you would sit on as you admire the long sunsets.

But this is just the start – how strong is this material, how does it react in its environment and how does it play a part in the moon’s hydrological cycle?  We’ve come a long way since Cassini first arrived at Titan, shrouded in its hazy atmosphere, and we could only guess at what lay beneath.   We have now got a big job of discovering how Titan has built and sustained its features, and certainly there are many more surprises in store.

Dr Helen Maynard-Casely is an instrument scientist for the WOMBAT high-intensity powder diffractometer at Australia’s Bragg Institute, outside Sydney. Her expertise is in the study of small molecules and ices under pressure. Much of this work is motivated by the wish to understand the interiors of planetary bodies. Prior to working at the Bragg Institute, Helen was based at the Powder-Diffraction beamline at the Australian Synchrotron where she developed her program of research on planetary ices.