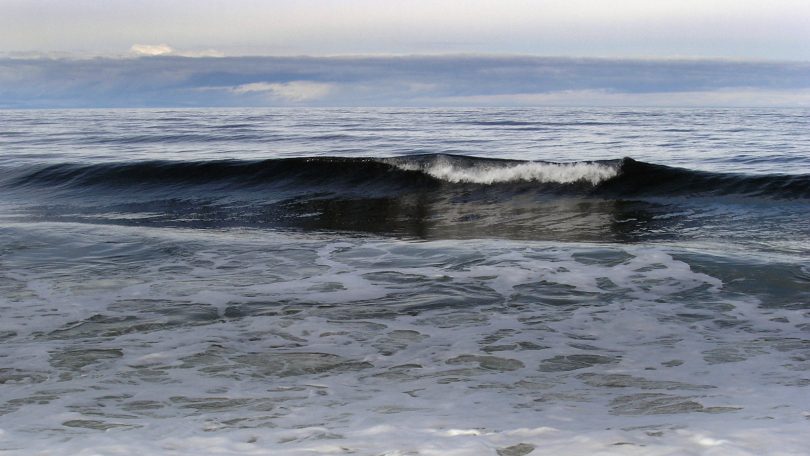 In February 1999 Mr John Sibley was killed when his small pleasure boat overturned off the coast off the Suffolk Coast of England. He was a non-swimmer gone for a day’s sea fishing with a friend in calm seas. Yet his friend recalls a freak, solitary 10-foot wave. Why? This was no tsunami. There was no distant undersea earthquake.

Theories at the time were that that newly installed fast ferries leaving Harwich left with just the right speed to trigger a soliton, an isolated, self-supported wave that can be triggered in sufficiently shallow water. Soon afterwards speed restrictions were put in place to avoid future similar disasters.

The Scottish writer Iain Banks, in his autobiographical book Raw Spirit, a road trip that pays homage to all of Scotland’s distilleries, describes his own encounter with a soliton. Documenting a visit to the Montrose Water Park, he tells the uninitiated reader how solitons are formed when the proportions between the depth, speed and height of the wave are just right. In this case the cause is the opening of little lock-gates in a gently sloping concrete channel, designed for holidaymakers to splash about in.

Banks spells out the properties of solitons, or solitary waves as they were first called, that they can propagate for miles along narrow stretches of water. But then he makes a crucial mistake. They were, he says, first noticed in Dutch canals. Presumably he is referring to the two Dutch scientists Korteweg and de Vries working in the 1890s, whose names are forever linked to the theory of soliton formation.

It was however, a fine Scottish engineer and scientist who first documented solitary waves – John Scott Russell. He was one of the great British engineers of the Victorian era, arguably the greatest Scottish engineer since James Watt. He was a contemporary and an equal to other great Victorian civil engineers such as Robert Stephenson, Isambard Kingdom Brunel, William Froude and John Rennie. Yet why is it that there is but one, obscure biography, and so few have heard of Scott Russell?

Born near Glasgow in 1808, John Scott Russell was principally known as a naval architect, pioneering the use of steam power and iron hulls. He came up with the notion of the so-called wave-line hull that was the first attempt to understand hull design from a practical consideration of wave resistance. He wrote widely, including in 1865 the definite three-volume Modern System of Naval Architecture.

But in common with many of the pioneers of his age, Scott Russell’s influence spread more widely than just shipping. He was well connected, and soon after moving down south was instrumental in proposing to Prince Albert what became the Great Exhibition of 1851, serving in a capacity that the Prince referred to as the ‘indefatigable secretary’ to the exhibition.

His scientific contributions concerned subjects as diverse as sound wave propagation (providing the first observation of the Doppler effect), railway rolling stock resistance, social politics and military planning. He also worked for a time as a journalist, chronicling the great railway boom of the 1840s for Charles Dickens’s Daily News. As a practising engineer, he not only designed boats of all shapes and sizes, including the yacht that lost to the US America in the first America’s Cup and the ship that held the London-Australia speed record – but also carried out many other engineering commissions. A notable achievement was his design in 1873 of the then world’s largest roof for the Vienna International Exhibition of the Austrian Empire.

A rounded heap of water

It was as a young man that Scott Russell discovered solitary waves:

I was observing the motion of a boat which was rapidly drawn along a narrow channel by a pair of horses, when the boat suddenly stopped – not so the mass of water in the channel which it had put in motion; it accumulated round the prow of the vessel in a state of violent agitation, then suddenly leaving it behind, rolled forward with great velocity, assuming the form of a large solitary elevation, a rounded, smooth and well-defined heap of water, which continued its course along the channel apparently without change of form or diminution of speed. I followed it on horseback, and overtook it still rolling on at a rate of some eight or nine miles an hour, preserving its original figure some thirty feet long and a foot to a foot and a half in height.”

He devoted much of the next few years conducting scientific experiments, carefully documenting the properties of these isolated waves.

I shall give a lecture on Scott Russell and his legacy at the Orkney Science Festival in September. I shall document his discovery of the solitary wave and also explain why it seems that his engineering achievements have been largely airbrushed from history. As a clue to this travesty, which is still being perpetrated to this day, let me recount what I saw during an episode of the Antiques Roadshow showing on BBC1 Television just last Sunday, 17th March. There was a fine image of the famous Great Eastern, the largest ship of its day, brought to the show by a descendant of its first captain. The presenter read aloud the caption: ‘designed by I K Brunel…,’ but for some reason did not read the rest of the sentence which could nevertheless be seen on the screen: ‘…built by John Scott Russell.’

In the meantime, till my lecture, perhaps any fishermen or other sailors reading this could look out evidence of solitary waves as they round the shores of Orkney and nearby waters. I would love to hear of examples when I visit in September.