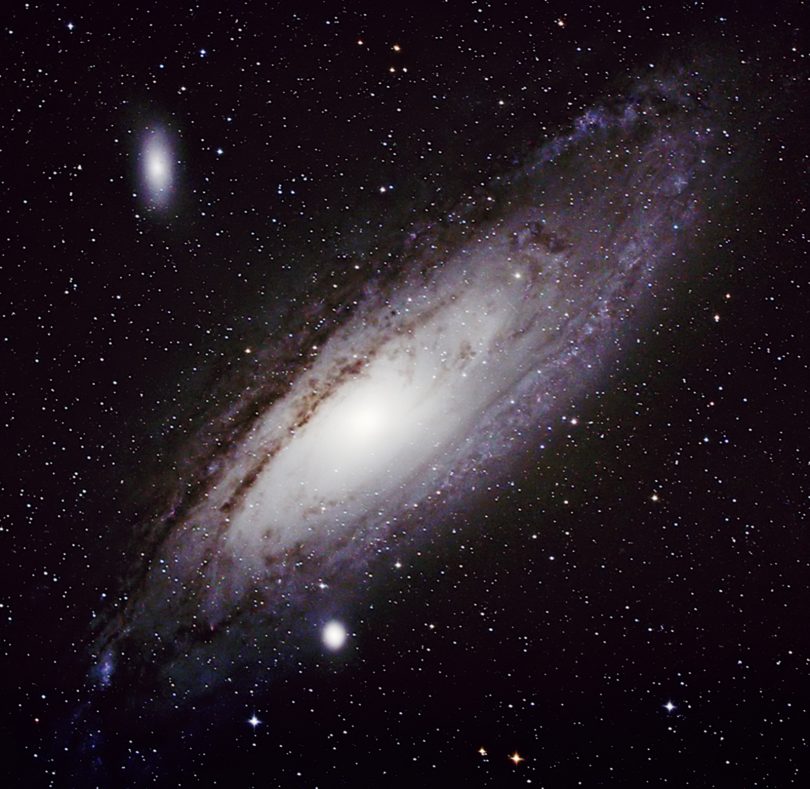 When Eric Walker asked his wife for a telescope for his birthday back in 2004 he got just a little more than he bargained for.

Instead of the small portable item he had envisioned – something he could stick in his backpack when he went hill-walking – he was presented with a large astronomical telescope.

Surprised but unperturbed, Eric set about learning how to use it; and before long he had developed a hobby which would lead to building his own observatory and making contact with other astrophotography enthusiasts worldwide.

Although he describes himself as ‘a rank amateur’, Eric already had an interest in photography, spurred along after receiving a digital camera as a gift for 25 years’ service with Diageo.

The logical conclusion, as he says, was to ‘stick the camera on the end of the scope’ and see what happened.

And then an observatory

As a no-half-measures kind of man, Eric was keen to figure out how to make the best use of his devices. He says he has been greatly assisted in this by the technology which was quite new at the time but just keeps on getting better and better.

His interest was also heightened by being able to share photographs quickly with other people and receive immediate feedback.

A member of the Highlands Astronomical Society, Eric was a frequent visitor to the society’s observatory at Culloden.

At his home in Conon Bridge, he found himself spending long hours setting up shots and finding them eventually frustrated by the unpredictable Highland weather. So he decided to build his own observatory.

The first and then the second

He is now working from his Mark 2 model. The first one he built from scratch himself from wood and paper maché, running into some difficulties when applying the paper maché to the frame and blocking his wife’s car in the drive for over a week until the paper maché dried.

I had to destroy Observatory 1 when the council fitted LED streetlights on our street. Although the light pollution was greatly reduced, the white light wiped out my adapted night vision in an instant and I could no longer observe in that location.”

Since then he has built Beinn View Observatory 2, completed last September and fully commissioned over the following months.

A room with a view

Beinn View is a modern custom-built glass-fibre building with a dome.  It is carefully located in his back garden in a position which is not affected by street lighting.

I’m really looking forward to using it ‘in anger’ this observing season and hope to produce some magnificent images based on my achievements to date,” say Eric.

Long-exposure work requires great precision and he can now take advantage of as many opportunities as he wants to set up his equipment, without physically being at the mercy of the elements. Despite this of course, cloud cover can still ruin everything.

Now that he is retired there are no real restrictions on the amount of time he devotes to his photography. He is free to work into the early hours if he so wishes and says that one of his best photos is from that time.

“Noctilucent clouds are night shining clouds which appear around 1 to 2 am in summer. They are composed of ice-covered dust particles of some sort and are a feature of high latitude,” he says.

Noctilucent clouds are the highest clouds in the Earth’s atmosphere at altitudes of around 50 miles (80 km). Made of ice crystals, they are only visible in a deep twilight.

Noctilucent roughly means night-shining in Latin. They are most commonly observed in the summer months at latitudes between 50° and 70° north and south of the Equator. (Conon Bridge is located at 57°N.)

Eric says that these clouds can be observed only during local summer months and when the sun is below the horizon for the observer, but while the clouds are still in sunlight.

They are too faint to be seen during daylight, and are visible only when illuminated by sunlight from below the horizon while the lower layers of the atmosphere are in the Earth’s shadow. Typically they are at their best around the hours of 1am to 3am.”

The Andromeda Galaxy is also one of Eric’s favourites and something he photographs every year to measure his improving skills.

Also known as Messier 31, or M31, it’s a spiral galaxy and is the nearest major galaxy to our own Milky Way.

It is visible to the naked eye on moonless nights as a large faint hazy patch in the constellation of Andromeda.

It took Eric about seven years of practicing and improvement to achieve an image of this standard.

On to the Pleiades

He says that he quite likes deep sky imaging, with star clusters such as Orion Nebula and the Pleiades.

The Pleiades, or Seven Sisters, Subaru, or Messier 45 (M45) is a middle-aged open star cluster (100+ million years old) situated in the constellation of Taurus.

The cluster is dominated by hot blue and extremely luminous stars.

The stars are currently passing through a dust cloud and light from the stars reflects off the dust and produces the beautiful blue nebulosity that can be brought out in astrophotographs.

The sword of Orion

I have a great image of the Orion Nebula from 2004 that I am really pleased with, but it’s one of those things,” he says. “You think you have something really good, but you can always be better.”

One of Eric’s favourite objects for observing and imaging, the Great Orion Nebula is also known as Messier 42 (M42).

The above image also includes its close companion the Running Man Nebula (NGC1977).

M42 is one of the brightest nebula in the night sky and can easily be seen as a long smudge hanging from Orion’s belt. It forms the familiar Orion’s sword.

It’s a beautiful site in the eyepiece of any telescope, says Eric, and when photographed, the colours are simply amazing.

He says that computer technology and software also affords the opportunity of enhancing and improving images afterwards and of building up a network of contacts at local, national and international level.

You can check with others how they got a particular image, or what went wrong. That’s always extremely useful.”

And thanks to a whole host of apps you can track what is going to appear in the sky and when, and plan ahead how you are going to capture it and pray for beautiful clear skies.

I just like capturing bonnie images that you can use as wallpaper on your computer or put in a frame and hang on your wall,” says Eric.

It’s a challenge because it’s not that easy but I love to learn and you are learning new techniques all the time. I’m definitely a ‘learn-by-doer’ – the classic guy who reads the instruction manual afterwards!”