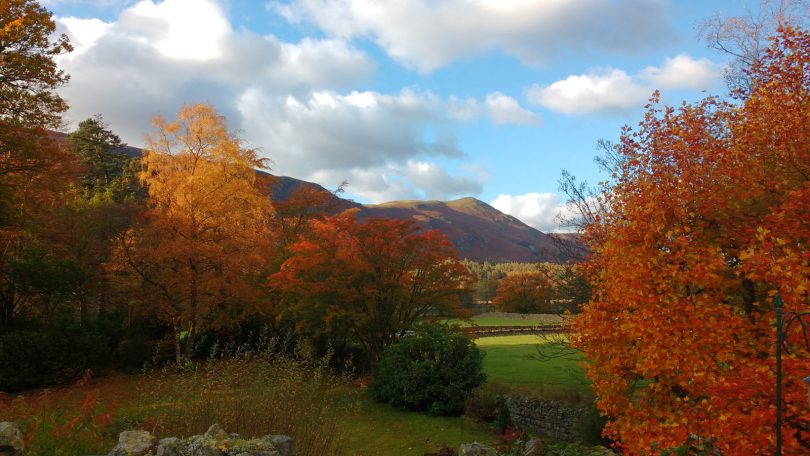 A time of morning mists and still pools, of roaring winds and falling apples, swirling leaves of fiery hue, of dark nights full of stars and screeching owls. Times of dew-covered cobwebs glistening in the dawn light, mysteriously hanging through railing and gorse.

A time when gravestones loom out of the hollows of graveyards, their shapes floating like ghosts. A time of winter crops, traditionally turnips since the 17th century, used as fodder to feed livestock in winter. As a child we’d pick turnips off the road, fallen treasure after the harvest, and armed with knives and spoons we set about hollowing and carving them into lanterns, bending a fine variety of cutlery.

The natural world plays with our imagination, and infuses us with urges to connect to make sense of the mystery, of the spiders’ webs and mist, of the haunting sounds of the dark, of the decay we smell under foot as the leaves fall and rot. Autumn, when the night chews into the day and dawn creeps in quietly, later and later. Autumn with its low, long, mellow light and shifting weather breeding stories and myths. And these are walkways for us to re-immerse into the dance of life, cords of connection drawing us back into a relationship with the spaces around us, where we are not separate from but tied intrinsically into a fabric of life, changing, breathing, growing, falling.

All is change. As Ovid, Roman poet, wrote in the Metamorphoses:

All things change, nothing is extinguished. There is nothing in the whole world which is permanent. Everything flows onward; all things are brought into being with a changing nature…”

A time of changing colours

Have you ever watched the autumn sun rise? The moment by moment, almost unseen shift of light and colour, cloud and shape, bird call and flight, animal breath rising. It is easy to take for granted the autumn rising sun, our earthly rotation, but look just once, if you can at the rising of the deep purple light to russet red, then floral pink, to peach flowing into gold then brilliant lemon yellow and finally, the great orb appears.

Autumn is a time of changing colours as chlorophyll fades and flavonoids, carotenoids and anthocyanins create the vibrant ambers, reds and yellows. Change, where we delight and desire to be part of this powerful transition, preparing for the winter, gathering ourselves around fires, anticipating the coming darkness.

A gateway from light to dark

Autumn and its stories embedded in Halloween, All Hallows and Celtic Samhain, Diwali festival of lights, and Cornish Allantide. The 31st October and the 1st November sit in us, around us, as a gateway from light to dark, life to death, sustenance to (possible) starvation, air to earth. A marking of the turning into the colder months, of remembering our dead when the veil between our world and theirs is thinnest.

Our ancestors would be bringing in the cattle, the droving, back down from the summer pastures, when livestock were slaughtered for the winter. When the faeries were appeased with treats to ensure people and their livestock survived the winter. When people dressed up to fool the faeries, or their ancestors, of their identity, creating guises of anonymity.

Autumn, a time of bonfires, burning leaves, celebrating and clearing away the remains of the harvest, tending the compost for the fingers of frost to weave their icy freeze thaw magic. And autumn is a time of tricks. In the village I grew up in in Cumbria, the 31st was a night to chain up your bins and fasten on the gates or they’d end up in trees and chimneys. We weren’t in for treats. Treats were to pacify, tricks confused and bewildered, just like the autumn gales on the dark, howling nights.

For the first year, I begin to understand the symbolism of modern-day Halloween, the shops adorned with polyester cobwebs, plastic pumpkins, neon ghosts and silicon severed torsos. We long for stories, to make sense of our world, to bring the outside in, the bring the unseen into our realm, to feel the mystery and power of the cosmos we’re in. We take our cues from the natural world and weave past practices of burning old garden debris, making lanterns with winter fodder and spiders whose webs are bejewelled by frost and dew, with gravestones that loom in autumn mist and all that ‘lives’ below.

We don’t seem to care as we voraciously gather Pagan, Celtic, and Christian cultural practices together to create a bulging purse of value and meaning, for a moment. Crashing stories interlaid and interlaced with our mortality, natures turning, and imagination, created and reflected back to us out of mists and light of ghosts and ghouls, faeries and vampires.

In the world of animal, mating comes. Feral and carnal, Autumn is the time of the roaring stags, their bellows like bulls rolling down from the hills, antlered heads silhouetted on the fell line, backed by endless sky. The rams are also claiming their ewes and sowing their seeds, just as the trees and flowers have shed theirs, just as the spiders have created their egg sacks and their cobwebs now hang in tatters.

Autumn is an ending, a fading of that year’s growth but also a beginning. A beginning which is slow, gestating, pregnant with potential. For each leaf that falls, each turnip or pumpkin harvested, each faery spirit or ancestor in the liminal zone pacified, may we give thanks for being part of the cycle of life, give thanks for the harvest. And when you watch that Autumn sunrise sometime soon, know you are not alone as the whole space around you is fluid with waking, dying and gestating in the forever, changing light.