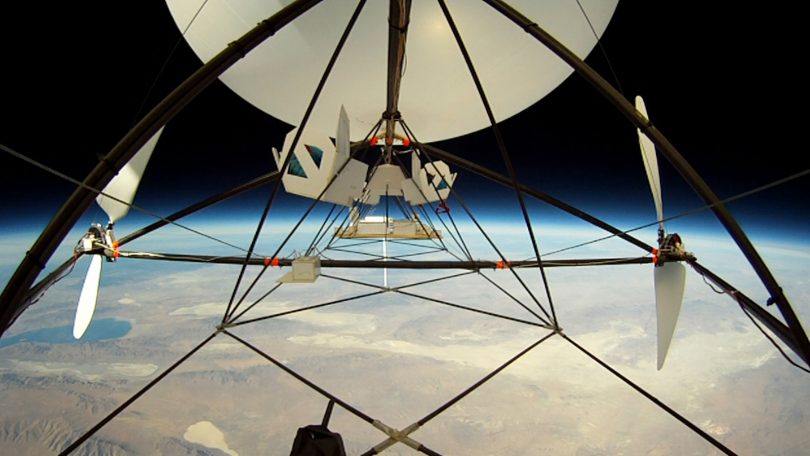 Written by Geoffrey A. Landis

Let’s go to the stars!

Even “slow” travel requires speeds of thousands of kilometers per second, orders of magnitude greater speed than any existing or planned space probe. “Slow” travel will require either a many-generation trip, a technology to suspend or slow-down human metabolism, or a way to send the humans in a compact form, such as in a robotic form, or in bodies grown on-site, perhaps as clones of the original humans. This requires considerable advances in biology, nanotechnology, or robotics.

For an interstellar flight, propulsion is the critical issue. The required velocity is so high that any conventional propulsion system in development today is inadequate, and the question of propulsion technology dominates all other technology considerations.

How far are the stars?

Today, when every day’s television viewing shows science-fiction featuring starships traveling from star to star in a day or two, it is important to start with a reminder of how distant the stars really are. In a project (Apollo) that was arguably the most complicated human endeavor in history, the farthest distance humans have ever traveled is 400,000 kilometers from Earth– one one-hundred millionth of the distance to the nearest star.

The Voyager probe, the fastest object ever launched from Earth, is now 12 billion kilometers from the sun and moving at 17.5 km/sec. In units more appropriate to discussions of interstellar travel, it has reached a distance of 0.001 light years from the Earth, moving at 0.006% of the speed of light.

If ice-age humans had launched a starship to Alpha Centauri at the speed of Voyager, at the end of the last ice age 11,000 years ago… it would be less than one-sixth of the way through its journey. Voyager will reach distance of Alpha Centauri in 70,000 years. (It should also be noted that Voyager is not, in fact, traveling in the direction of any nearby stars.)

Another way to see why interstellar travel is difficult is to examine the rocket equation.  The mass ratio of a rocket is exponential – it doesn’t take ten times as much fuel to go ten times as fast; it takes exponentially more than that.

The best chemical rockets achieve an exhaust velocity of about 5 kilometers per second, so to achieve a velocity of only one tenth of one percent of the speed of light (fast enough to reach the nearest star in a little over four millennia) the mass of fuel required would be about ten to the 26th times the mass of the spacecraft!

Obviously, chemical rockets are a completely inadequate technology for interstellar flight. But can’t we do better?

The most straightforward concept to go beyond the adverse mass ratios of chemical rockets is to develop a nuclear rocket.

However, it is important to note that the actual exhaust velocity achievable is limited by the temperature. In a conventional rocket, even with hydrogen, the lowest molecular weight exhaust possible, thermal limitations of materials mean that a nuclear-fueled rocket that uses heated gas cannot achieve an exhaust velocity above about fifteen kilometers per second, only slightly higher than that of the hydrogen/oxygen rocket.

This is why many proposals for nuclear rockets for interstellar flight use systems where the nuclear reaction occurs outside the rocket, and hence are less limited by the temperature.

The first concept for interstellar flight that could be considered feasible in that it seriously addressed the mass-ratio problem, was the “Orion” nuclear-bomb powered spacecraft proposed by Stanislaw Ulam, Theodore Taylor, and others.

The concept is that a nuclear bomb is exploded behind the spacecraft. The shock wave of the explosion impinges on a “pusher plate,” which transfers the momentum to the vehicle [figure 1]. These explosions are then repeated as needed until the vehicle reaches the required velocity.

This spacecraft was analyzed as a concept for interstellar flight by Freeman Dyson in an article in Physics Today in 1968. He proposed upgrading the atomic-bomb powered spaceship of Ulam and Taylor to a fusion-bomb powered spaceship, and calculated that such a spaceship could reach a velocity somewhere between 1000 kilometers per second and 10,000 kilometers per second, depending on his assumptions, and thus reach the nearest star over a flight time between a century and a thousand years.

While this is quite a long time by any human standards, it is a possible propulsion system that does not violate the laws of physics.

Inspired by the concepts of nuclear pulse propulsion developed by Orion, members of the British Interplanetary Society developed a more reasonable concept for a nuclear pulse propulsion interstellar probe. From 1973 through 1978, a thirteen-member team worked on the design of “Project Daedalus”, a fusion-powered interstellar probe designed for a fly-by mission across 5.9 light-year distance to Barnard’s Star in fifty years.

The Daedalus concept proposed that a one-gram pellet of a frozen mixture of deuterium and helium-three could be compressed and heated by high-energy electron beams, and induced to undergo a fusion reaction creating a fusion “micro explosion”.

Relying on a fusion reaction that has never been demonstrated, and requiring a fuel that requires mining missions to Jupiter, the Daedalus project was not a realistic endeavor for the near-term. Nevertheless, the Daedalus is a landmark in that the Project Daedalus team examined all the features of interstellar ship design, and the report remains the most complete study of interstellar ship design ever written.

His analysis was that the mass ratio problem could be avoided by the simple expedient of leaving the actual power source for the spacecraft stationary. In a series of papers (as well as science-fiction stories), he proposed and analyzed the concept of pushing spacecraft by beamed energy.

The concept of a solar sail was first proposed by Tsander in 1924. He noted that since a photon carries momentum, the reflection of a beam of light will provide a push, and hence a large thin reflective “sail” could be pushed by sunlight, resulting in a method of propulsion in space which uses no propellant (and hence can reach velocities which are not limited by reaction mass). The amount of force produced by sunlight is very small– but it builds up.

While sunlight can be used to push a lightweight sail, the fact that sunlight decreases by the factor 1/r2 with distance from the sun puts a limit on the maximum velocity achievable in a trajectory directly outward from the sun. This is far faster than existing propulsion systems, but inadequate for realistic interstellar missions.

The concept of a laser-pushed lightsail is shown in very crude schematic in Figure 3.

Forward proposed to use a laser instead of sunlight to push a lightsail. He provided background calculations on how a laser-pushed sail would work to science fiction writers Larry Niven and Jerry Pournelle for use a science fiction novel, then developed the concept in more detail, first in his own science fiction and later publishing detailed calculations in a landmark paper in the Journal of Spacecraft and Rockets.

The second, more advanced mission, proposed stopping at the target star. Since a laser is able only to push on a sail, stopping the probe at the target star is difficult. Forward proposed that the lightsail separates into two parts, and the larger element reflects the incident light onto a smaller segment of the sail. In this way, the reflected light can stop the smaller sail.

I analyzed several variants on the Forward “Flyby” probe, concluding that the maximum operating temperature of the sail was a critical parameter in the performance.

He concluded that shifting from an aluminum sail to niobium would allow the probe to reach speed much faster, and hence allow a smaller probe.

For the long term, the highest energy-density fuel would be the use of antimatter annihilation as a fuel for propulsion.

Production of antimatter in quantities large enough for interstellar propulsion requires an improvement of many orders of magnitude in the ability to manufacture antimatter.

Cooling of the antiprotons and recombination of antiprotons with positrons to form antihydrogen has been done, but to date, only hundreds of cool anti-hydrogen atoms have been formed. Sufficient antihydrogen must then be formed, condensed into solid form, stored in a electrostatic or magnetic field in isolation from normal matter, and a system devised that can handle the injection of the antimatter into an engine chamber without annihilating the antimatter en route. The details of the antimatter annihilation engine must also be worked out.

These technical problems put the creation of an antimatter annihilation engine beyond the bounds of currently possible technology.

In the long term, however, such an antimatter annihilation engine would be far more efficient than any conventional or nuclear rocket, and could be a means of high-thrust propulsion for future human interstellar missions.

In 1968, when Freeman Dyson published his article on adapting the Orion nuclear-pulse rocket concept to interstellar flight, he quoted a well-known physics professor as saying “All this stuff about traveling around the universe in space suits – except for local exploration, which I have not discussed – belongs back where it came from on the cereal box.”

In the intervening years, we’ve come a long way toward turning cereal-box dreams into physics reality. I still believe that there are still a lot of innovative ideas and new concepts yet to be invented, which may, someday, turn interstellar flight into engineering reality.

Geoffrey A. Landis is a scientist at the NASA John Glenn Research Center, and currently is a member of the Mars Exploration Rovers science team. He is also an award-winning science fiction writer, author of the novel Mars Crossing and the collection Impact Parameter. More information can be found on his web page.