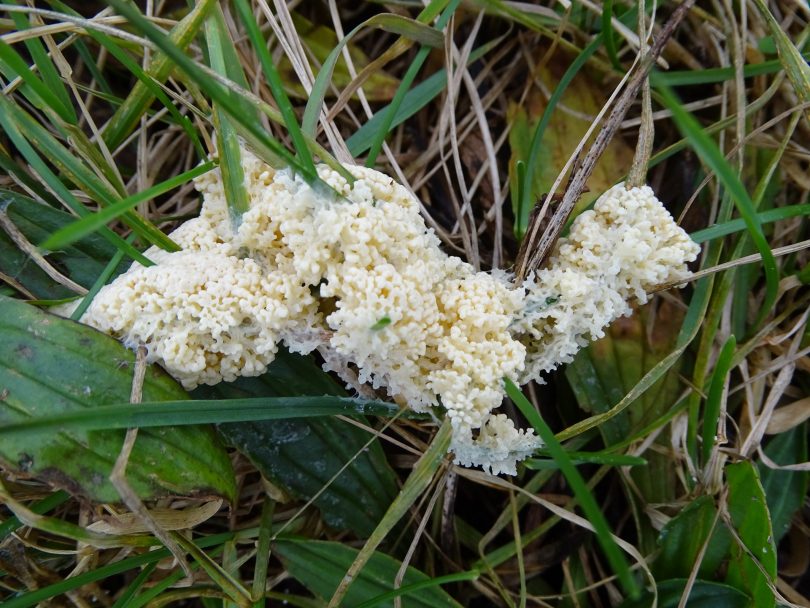 We watched a television programme about Slime Mould titled The Blob: A Genius Without A Brain, and that’s what Slime Mould is. It’s not an animal. It’s not a plant. It’s not a fungus. It is, uniquely, what it is. It thinks – you can watch it thinking as it solves puzzles. It solves puzzles and shares information. It moves – how? By a flow of energy within itself.

It has fascinated me for years. When it appears in our garden I’m always pleased to see it.

One thing which featured in the television programme which angered me – something which always angers me – is how we humans approach and deal with other forms of life.

One of the scientists working with Slime Mould, Audrey Dussutour, has a good approach. She studies the organism, conducts experiments, repeats the experiments to ensure that the data is valid. She feeds the Slime Mould with nice puddings and watches it choose the nicest! She shows respect and admiration for the qualities exhibited by the Slime Mould – or I should say for the qualities observed so far – there could be more wonders to come!

The idea was mooted of sending Slime Mould into space, just to see how it would react. I’m reminded of the dog and the ape which were subjected to an alien environment, just to see what happened.

And this is where we can go into the realms of Science Fiction. Picture it – they send Slime Mould into space. It’s intelligent, it adapts and works out how to deal with things it doesn’t like, such as salt. It finds itself in a capsule in space, doesn’t like it – adapts – learns – grows – comes back to Earth and teaches us a lesson for treating it like that. And I wouldn’t blame it if it did.

Or it might take the opportunity to go to another planet, set up a colony and live peacefully unto itself. Or maybe when we have made the surface of this planet uninhabitable for most to the life-forms which are here now, Slime Mould would return, join with fungi and cockroaches and make something of our wreckage.

Whatever it does and whatever we do in relation to it, it is definitely, beyond doubt, a sentient being and we should be treating it with respect and trying to understand this ancient organism which inhabits the planet with us – not treating it with the usual arrogance of the monkey-men.