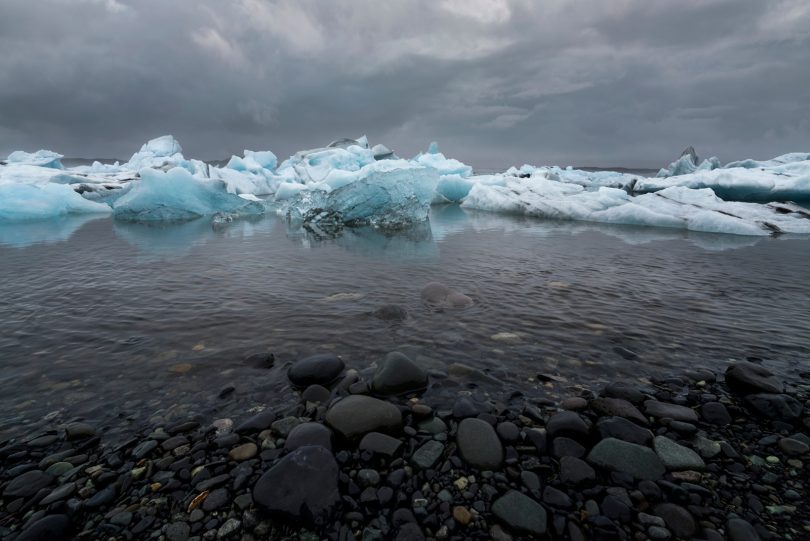 Iceberg from the glaciers of southern Iceland

The future British isles maintained these relatively temperate conditions, and experienced some warmer eras, for another 2,000 years. Then it changed.

Last week a friend in France was walking in the Pyrenees. Around 2,000 metres above sea level, he met for the first time the little flower Dryas Octopelata , a ground covering plant similar to a wild strawberry. Both are of the family Rosaceae.

He was meeting a little flower with a big reputation ~ it gave its name to three climate eras, the Younger Dryas, Older Dryas, and Oldest Dryas, three cold periods in the long meltdown of the last Ice Age. The Younger Dryas, the closest to us in time, was the longest and most severe. It started and ended abruptly.

Geologists in Scandinavia named these eras while investigating sediments for evidence of the meltdown of the last Ice Age ~ they saw the dryas had disappeared, then returned. Clearly, as the dryas thrives today in the Pyrenees at 2,000 to 2,5000 metres, they tolerate heat ; they flourish where others cannot tolerate the cold.

BP = Before the Present, which usually means 1950 in Ice Age studies.

The signs of the Younger Dryas are seen in the Greenland ice.

In the highlands glaciers from the Ice gouged out Glencoe as we know it, and carved the glens in which lochs like Lomond, Rannoch, Tummel and Garry would fill after the glacier receded, leaving a wall of rubble the ice had dragged and dumped there behind which a loch could form, initially from the meltwater of the retreating ice.

There is no certainty as to what started or ended the Younger Dryas. It was not a global cooling ; on both sides of the Atlantic further south, around the Caribbean and West Africa, it warmed a little, as the Gulf Stream appears to have no longer carried heat into the north.

But in regions of northeastern America and northwestern Europe, average temperature appears to have dropped 7°. The cold lasted 12,900 to 11,700 years ago ; when it ended the ice cores show average annual temperature over Greenland rose 10°C in less than 50 years !!

Some think the YD was kickstarted by a meteor landing on the Ice, Recent scanning of rock under the Greenland ice has revealed big impact craters ~ meteors appear to have smashed through the Ice, no one is yet sure how long ago. They could have melted a colossal amount of water into the sea, and played havoc with the ocean current system ; the crater would fill with water, in time that would turn to ice, and vanish under snow.

A meteor which threw enough muck into the atmosphere to cool the climate for over a thousand years would have been intensely felt in many ways, including a drastic cooling, all over the planet.

That was not the case. Anyway, I think what started the Younger Dryas may be less interesting in our age than how long it lasted and the nature of its ending.

To explain its intensity and duration here, we have to look at the ocean.

A colossal switch in the north Atlantic current system set it on an alternate track where it stayed for 1,200 years. Then flipped back.

2015 in the western isles was the coldest wettest greyest summer ever recorded here. Since 2012 we’ve seen the longest dry spell, strongest wind, driest September, etc. In between we’ve got a climate just now of extreme moderation. I don’t know where the last two winters stand in the rankings for warmest ever, but they’re surely up there ~ on the west coast of Harris, I saw a bough of an old hawthorn in bloom this January. Today, July 24th, fog and rain ~ this year so far one day has got above 20°C. In England today it’s over 30°, in France over 40°.

The islanders tell me summers in the recent past were warmer and drier. Getting in peats and hay was simpler. In winters they often saw deep snow. I’ve seen photos, but living here since 2011,  I’ve never seen much snow, and never for long. Even the hills above 700 metres high are without snow most of the winter now.

In 2015, in the ocean south of Greenland the coldest temperatures ever measured in their location and time of year were taken.

In the western isles we’re getting warmer from the south and cooler from the west.

During the YD, Britain, some inner Hebrides islands, and I guess Orkney were still attached to the European mainland.

Inland, the YD was not only cold but dry ; ice and snow on Rannoch and the western highlands chilled clouds off the Atlantic so they tended to dump their rain or snow in the west, and the east grew more arid as the western Ice grew.

Glaciers in mountains carved corries and outfall glens ; most of lowland Britain reverted to tundra, mammoth and reindeer country. Further south birch and pine grew, as seen in ancient pollen from around 12,000 BP found in Norfolk, for example.

In the west, I think, was a different story ~ then as now, it stayed milder, moister, and was home to far more variety of life through the Younger Dryas.

Ireland surely became an island hundreds of years before the YD.

9,000 years ago the bear, wolf, lynx and wildcat still lived in Ireland.

The earliest signs after the YD of pine on mainland Scotland have been found in the northwest, at Loch Maree, due east of what was then a giant Western Isle.

It was milder here and moister, and maybe in the Younger Dryas, in a cooler climate, winds which are such a constraint on cultivation in a treeless landscape were less severe, and there were trees. Some of our present sea lochs were deep, sheltered, probably wooded glens still above sea level.

A couple of years ago, in autumn, an exploring pig on Islay turned up what were later identified as stone tools estimated to have been in use about 12,000 years ago, deep in the Younger Dryas. Islay was then a long peninsula connected to Jura, then to the mainland.

From a hilltop they might have seen the perpetually snow covered mountains in the far northwest, and the great glacier cascading out of the Cruachan Horseshoe, forged in the Younger Dryas.

That’s roughly what I’m coming to this year’s Festival to talk about.

It might have looked like that near one of the big glaciers somewhere in the western coastlands and islands of Scotland 12,000 years ago.

Below is a photo of southern Iceland today. 12,000 years ago, it could have been Yorkshire.