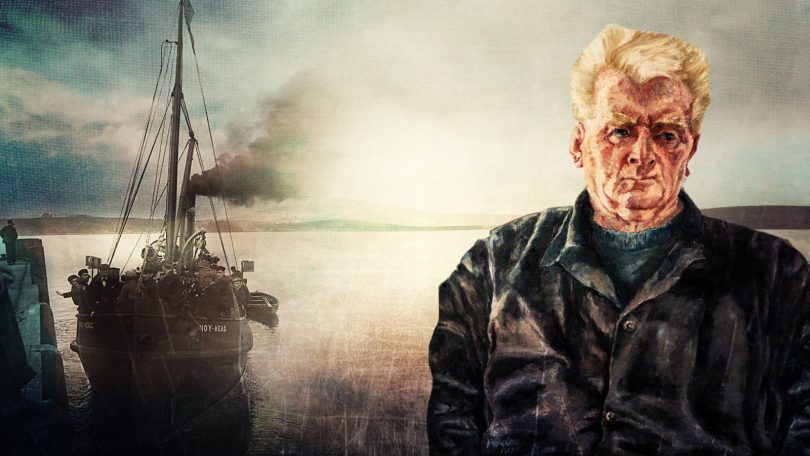 Captain John William Hourie was born at the farm of Wald, in the parish of Firth, in the year 1897. He was the only son of the Hourie family and from an early age he was involved in work on the farm, especially herding cattle. He was continuing a long tradition, since his family had lived on the same farm for over 300 years.

He had a work ethos all his life that was very Presbyterian and Calvinistic: dedication to work. Having had limited education, he was determined to succeed at whatever task he undertook, such as sitting to gain his maritime qualifications. He remarked that he found the studying particularly difficult, however he later gained his master’s certificate.

I have always felt it was a privilege that John Hourie was my uncle by marriage.

I remember his sister Tina told me that one Saturday evening in early August 1914, John went off as usual to Stromness, but he never returned for over two weeks. All the young men had been conscripted for war training and only got home to pack a bag, to be then sent off south to prepare for being sent to France.

While Captain Hourie seldom spoke of his First World War experiences, I know he had been at Ypres, and in the trenches at both Passchendaele and the Somme.

He never mentioned the fighting and the loss of many of his comrades, but he did say about the camaraderie and also the terrible conditions. In fact it was those conditions he blamed on the Liberal Government of Lloyd George, and following the war he became a very staunch member of the Labour Party.

He went to sea following the end of hostilities and served much of his time on cargo ships trading in the Black Sea, moving wheat from Odessa to various ports in Turkey. One of his recollections was about how, when in Russian ports, Cossacks sometimes used to ride full gallop down through the docks and pull up beside the foreign ships. They were clad in their best clothes and always were heavily armed, wearing a sword and several daggers. They seemed to be mesmerised by what they thought was the luxury of these cargo vessels, while by Western standards these ships were poorly equipped.

On at least one occasion, the crew invited the Cossacks aboard and these men from the steppes left a gift to most of the crew.

Following the time in the Black Sea, he also spent time on cargo ships, or as he called them, tramp ships, across the Atlantic, carrying anything you could imagine, as the saying goes, from a needle to an anchor.

I remember one point he made was if the passage was really rough, and took much longer than usual, the crew had to rely for food on the on-board supply of ship’s biscuits – and one always had to break them in half first to shake out the maggots before they could be eaten.

One of his great disappointments and indeed disgust, was an experience he had when he was a partner in the Stromness shipping firm Bremner & Co who owned the ferries which served the South Isles as well as having cargo ships which traded to and from Orkney.

Like all vessels, the cargo ships had to have annual inspection and overhaul at a yard which had dry-docking facilities.

The Orkney Dawn was skippered by Captain Hourie down to Peterhead and also then on to Buckie. It so happened in the meantime, the yard workers had gone on strike about some minor issue, and they blacklisted the Orkney Dawn, simply because she was there, making it impossible for her to be inspected or overhauled in any yard in the country.

The result was the most heartbreaking experience. He had to pay off his crew, many who had served with the ship for a great number of years, and he also had no alternative but to put his ship up for sale.

There was one very memorable and remarkable occasion Captain Hourie had, which he never told anyone in Orkney, and indeed when I told his family, they were totally flabbergasted. I was down at a meeting in the Scottish Office on Orkney Islands Council business, when at lunch one of the senior civil servants came to me and asked, “Do you come from Orkney?” – and then asked if I knew of Captain Hourie. I replied yes, indeed I did. The civil servant then proceeded to tell me the remarkable story of how oil came to Flotta.

On this particular day, in the early 1970s, an American oil tycoon, Dr Armand Hammer, flew into Edinburgh in his private TriStar jet, at that time the largest aircraft to have ever landed at Turnhouse.

Dr Hammer proceeded to the Scottish Office and demanded to see the Secretary of State. He was promptly told the Secretary never sees anyone without a prior appointment, possibly arranged as much as a month before. He was asked what was his urgent business. He replied that he wanted to build an oil terminal on the east coast of Scotland.

In the light of this information, the Secretary of State agreed to meet Dr Hammer in his office. Of course he called in all his advisers to do with major construction and development. However Dr Hammer asked, “Do any of you know anything about harbours with safe, deep anchorages?” Clearly no one did, however this civil servant, who was a junior at the time, whispered to the Secretary that there was an experienced, senior sea captain a few doors away, negotiating his annual grant to keep the lifeline ferry services going for the South Isles of Orkney.

The Secretary of State immediately asked for Captain Hourie to be summoned into the meeting with Dr Hammer. Very quickly he and Dr Hammer were just like long-lost friends, and when asked about a safe, large harbour on the east coast, John’s reply was: “There are really none of the size you want on the east coast, but there is one in Orkney. Scapa Flow is a large deep natural harbour and your very big tankers can easily swing at anchor.”

Dr Hammer’s reply was: “OK, Captain, come and show me.” They both took off in the TriStar to fly up low over Scapa Flow and Flotta.

This is how Flotta and Scapa Flow became Orkney’s oil terminal and harbour.

Finally, I feel I can do no better than to quote from The Orcadian, and Captain William Dennison of the Elwick Bay Shipping Company who gave a very apt summary of Captain Hourie’s life.

I know we have lost one of the greatest Orcadians of all time, undecorated and without honours, but supremely respected by all who knew him. John was a superb seaman, a workman of unbelievable strength and energy, a shipbroker and stevedore with an unrivalled mixture of genial tyranny.

Truly the last of the great Vikings.”

Eoin was at the heart of the Orkney community in so many ways. He farmed the family farm at Redland where he developed a woodland and investigated the history and archaeology of the area. He was an Islands Councillor, a Tax Commissioner, a Deputy Lieutenant of Orkney, chairman of Orkney Archaeological Society and of the Hoy Trust, and chairman of the Science Festival for more than twenty years. He died on 5 June 2012. The annual Eoin F. Scott Memorial Lecture will be given in the 2014 Festival by the geneticist Dr Jim Wilson of Edinburgh University, who is a cousin.