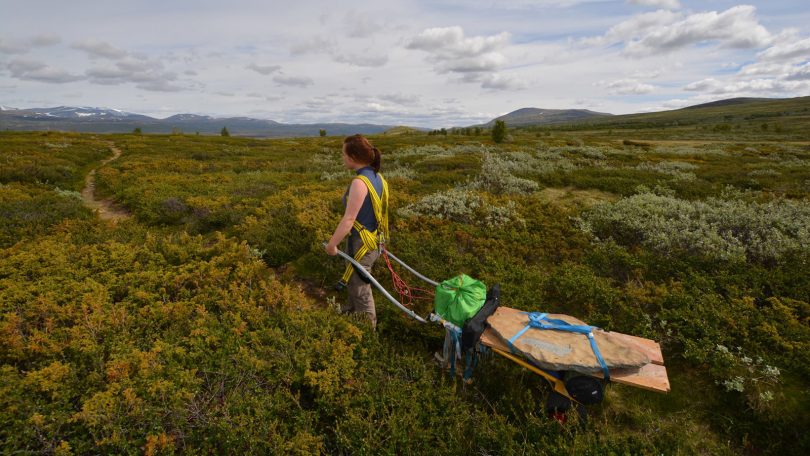 An Orkney siltstone from Devonian times, carved with footprints for the legend of an ancient boat, has been travelling across Norway this summer, to Bergen, Oslo and Trondheim. Artist Beatrice Searle describes the background to her 1300-mile journey.

I will walk with a new carving of an ancient footprint stone, historically used for human expressions of strength and security. Just as people have always moved with objects that anchor and define them, so I will walk with The Orkney Boat along the newly opened St Magnus Way and Norway’s ancient Gudbrandsdalen pilgrim path. As I do so, I will invite those I meet to stand in the stone, experience their own connection with it and add to its ongoing story.
At the journey’s end the stone will become a lasting sculptural installation in Orkney. I will document the journey and the ‘standings’ through photography, drawing, writing and collected stories.”

2013 was my final year as a Fine Art undergraduate. My small studio space was filling up with stone offcuts that I had collected from local quarries. And beneath my clumsy chisel work, these discarded pieces were slowly being transformed into stone soles for human feet, stone anchors and harpoons for use in the landscape, deep stone voids to be stood in.

I was then, as I am now, exploring the idea of anchorage and human connection to landscape.

But it was not until three years later that I discovered my direct inspiration for this project, at Burwick Kirk – the ancient Orcadian stone known as the Ladykirk Stone of St Magnus’s Boat. 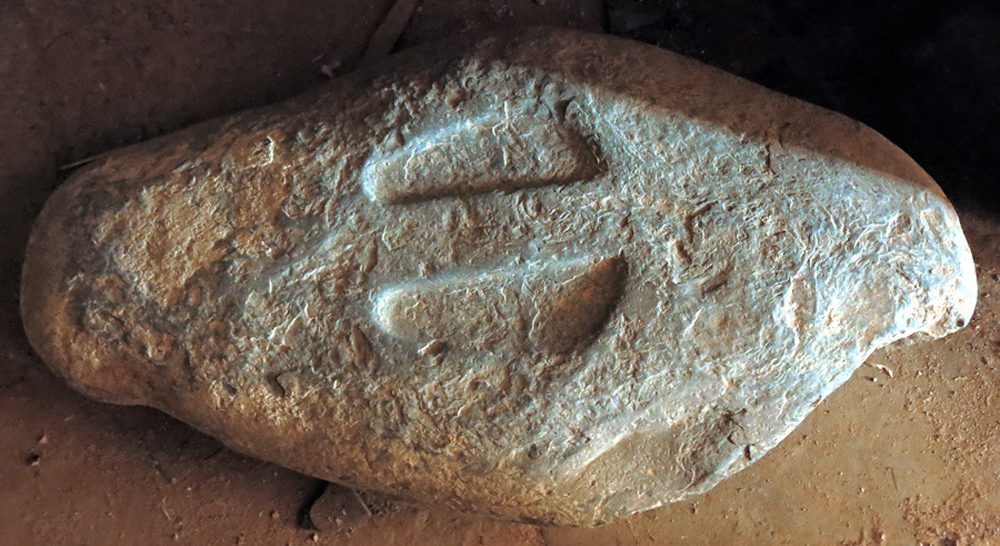 Into this sea-rounded piece of whinstone are carved two foot-shaped hollows. The footprints are shaped and smoothed, so that a bare foot fits comfortably.

One of many stories surrounding the stone tells that Magnus, unable to find a boat to carry him across the Pentland Firth, took this stone and, “setting his Feet thereupon, passed the Firth safely, and left the Stone in this Church, which hath continued here ever since.” This local legend has given rise to an alternative name for the stone – St Magnus’s Boat.

However, the stone almost certainly came from, and was used, near its present location. It precedes St Magnus and the myths that surround him, having been made and used by the people of Pictish times during the late Iron Age.

For the people of those times in Scotland and Ireland, stones such as these were connected with kingship. The chosen king would stand in the footprints in order to signify his connection with the land he ruled and to reinforce his intention to follow in the footsteps of his ancestors.

Subjects too, when the time came to choose a new king of chieftain, would stand in the stone to proclaim their votes before their peers, signifying, through the steadfastness of the tone, that the action was strong and would be lasting.

Iron Age stones containing footprints occur elsewhere in Scotland – in the Western isles and at Dunadd in Argyll.

A stone for travellers

Footprint stones occur in Roman history also. To bring safe travel the Romans are known to have carved footprints into stone s, bearing the inscription ‘Pro itu et reitu’ – ‘For the journey and return’. The traveller would place his feet twice in the footprints: first, to be in direct contact with the land he was leaving, and then as an act of reconnection when he returned.

This use relates to another tale surrounding the legend of Magnus, which tells that rather than cross on the stone, Magnus stood in it before setting out by boat across the Pentland Firth.

Whether Iron Age, Roman or medieval, the purpose of these stones was to provide the strength and security needed to lead, to vote or to undertake a journey. All who stood in them did so to be empowered by the act, harnessing wisdom, strength and resilience through their direct contact with the rock.

The project For the Journey and Return takes these historic precedents, utilities and mythologies and, through a new interactive artwork, invites people to find their own anchorage and strength in a new stone – The Orkney Boat.

What is The Orkney Boat?

The Orkney Boat is a ripple-marked Devonian siltstone (390 million years old) from Marwick Bay, into which I have carved two footprints. The stone is 900 by 600 millimetres, and weighs approximately 30 kilos. 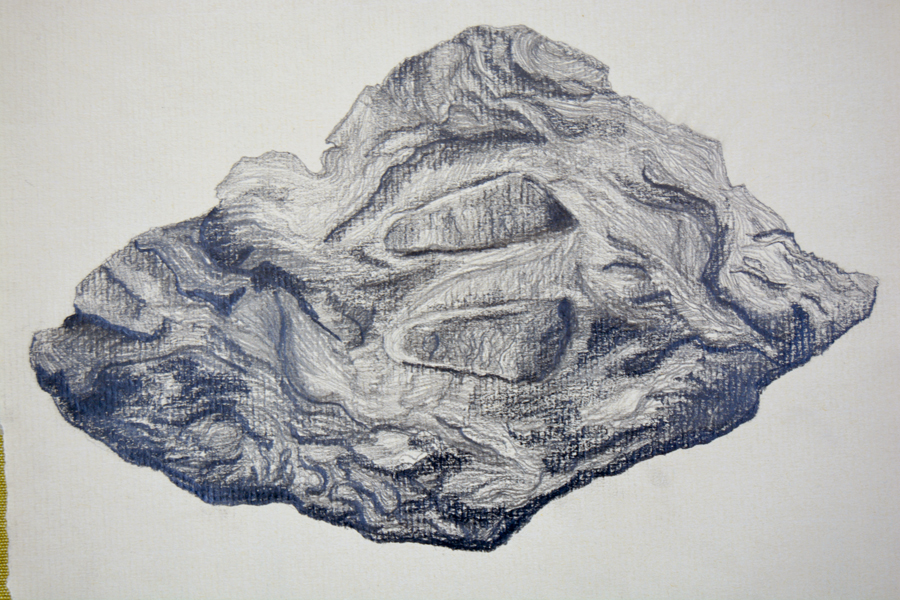 An early, imagined sketch of The Orkney Boat 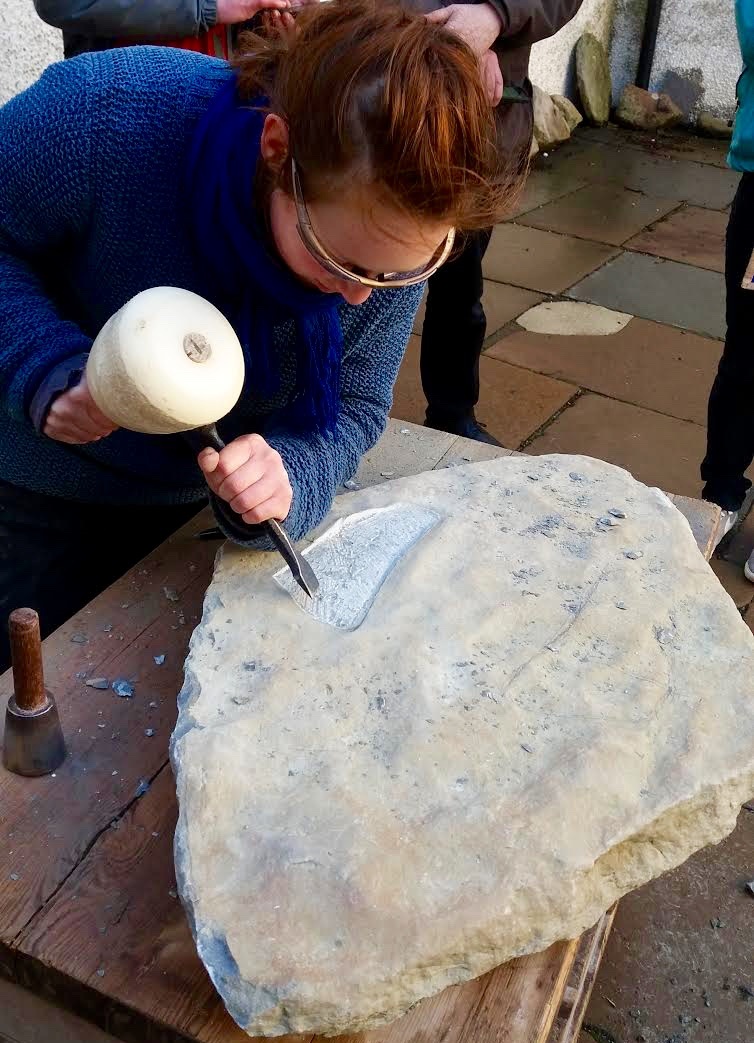 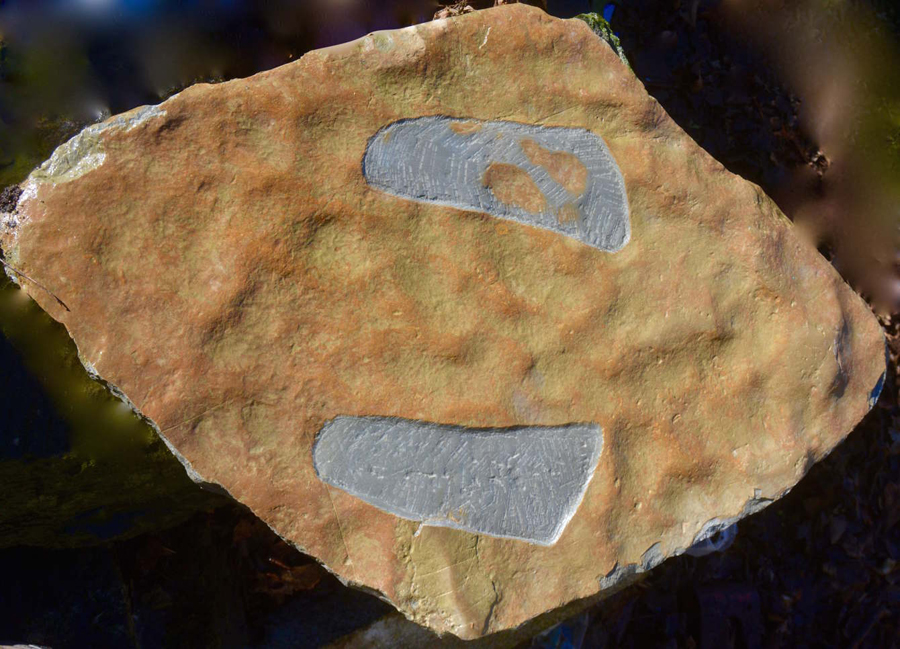 Blue beneath the orange patina! The Orkney Boat, 2017

All who encounter it are invited to stand in The Orkney Boat. Standings should be made barefoot, in order to have direct contact with this powerful, resilient, slow-moving, wise and ancient material. Spend as long as you like in the stone. If it moves you to speak, please feel free to do so. We are living in a time when to ‘take a stand’ or to speak up for what you believe, are important actions to take.

Standings will be photographed (with permissions), and a collection of photographs, drawings and stories complied at the end of the project.

Invitation to the public 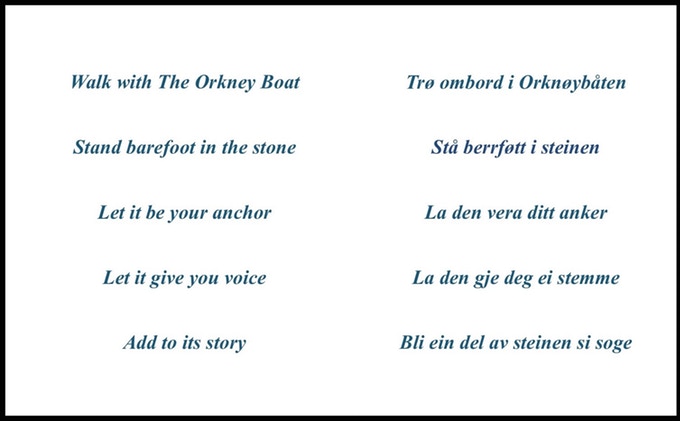 Nynorsk translation, based on the old Norse-influenced dialects of Norway

to anchor verb 1. To hold, to be held securely

There is a conflict inherent in human nature: the need for anchorage, strength and security opposes the equal need to move, to progress to be free. I want to explore what it might mean to be able to raise something that grounds you and move with it.

People and cultures have always been on the move, and when possible they do so with objects that define and anchor them.

The Orkney Boat is my anchor to the land. Just as boats are able to raise their anchors and move with them, I will raise The Orkney Boat and carry it with me on a journey of 1,300 miles. At a time of so much mass and forced migration in the world, carrying a part of a beloved landscape or homeland takes on an additional and important resonance.

I will begin by walking mainland Orkney along the newly established St Magnus Way. From Orkney, the stone and I will sail on the Swan (an ex-herring fishing vessel, originally launched in 1900) across the North Sea to Bergen, and then travel by train to Oslo. 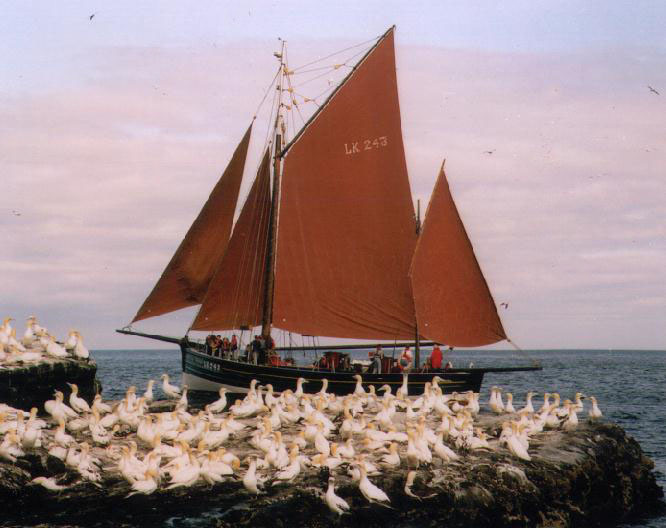 From this point onwards I will move on foot, bringing the stone along on a cart drawn from my hips. I will walk Norway’s ancient Gudbrandsdalen Path, through Dovrefjell, ending at Nidaros Cathedral in Trondheim. I will be joined by my walking partner, who will assist in carrying provisions and equipment.

Having reached Trondheim, I will return to Orkney with the stone.

The journey will last for almost two months. I will be walking some challenging terrain and accepting the inevitable slowness that comes with a journey on foot with a heavy load. I will repeatedly stand in The Orkney Boat and it will anchor me along the way. 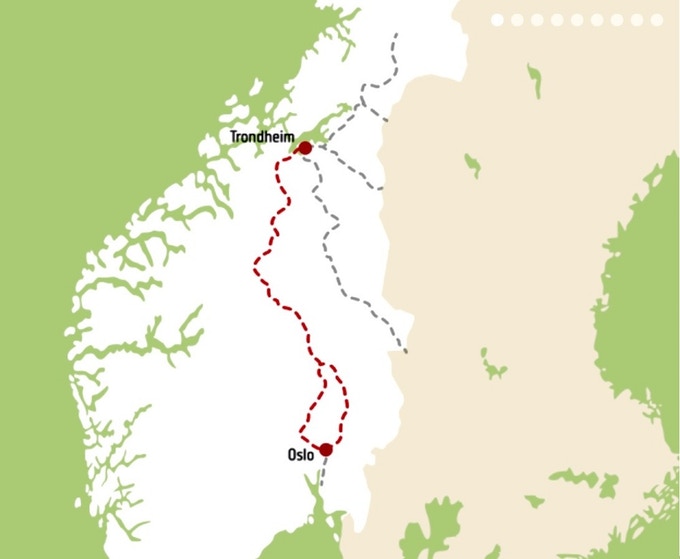 Orcadian musician and composer James Watson is composing a piece on the Hardanger fiddle, inspired by the theme ‘Music for a Departure’. James will play off the Swan as it sails out of Orkney, and there will be an opportunity to hear the piece during Orkney’s Folk Festival weekend also.

Here he is playing a piece last year with the group Teebro, with Gavin Firth (guitar) and Dan Rhodes (bass).

I have also been privileged to work with artist Toni Watts to design and make an illuminated map inspired by the journey and the intentions of The Orkney Boat. 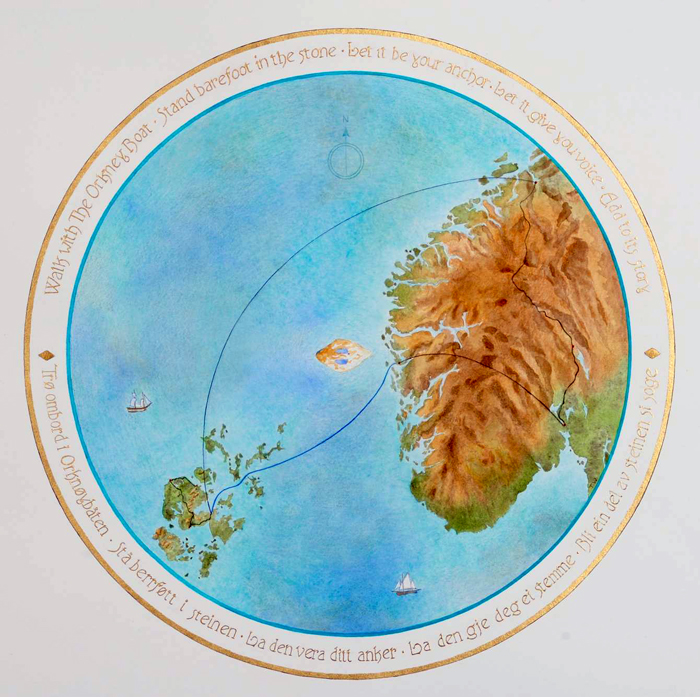 It is from its journey and its encounter with people that the stone will accumulate its narrative. There are many ways to be part of the Orkney Boat story.

8 March – 6 April 2017: Support the fundraising campaign and join the community that is making the journey of The Orkney Boat possible.

17 April, 10:00: Walk with The Orkney Boat. Opening of the first part of the St Magnus Way (Gurness – Birsay, 12 miles). Starts from the Broch of Gurness car park. This will be the first opportunity to stand in The Orkney Boat.

27 May (Orkney Folk Festival weekend): Early morning concert in St Magnus Kirk, Birsay, in which Orcadian musician James Watson will perform his composition Music for a Departure, specially commissioned for this project, on the Hardanger fiddle. The second section of the St Magnus Way (Birsay – Finstown) will open; once again the public are invited to walk with The Orkney Boat. There will also be an opportunity to stand in the stone.

1 June: The Swan sets sail from Orkney. The Orkney Boat and I will leave Orkney on the Sawn. We will go via Shetland, from where we can sail directly on to Bryggen.

4 June: Arrival in Bergen. The stone will be received by the Bryggen Foundation in the UNESCO World Heritage area of Bryggestredet.

6 June: Arrival in Oslo and beginning of the walk on the Gudbrandsdalen path. Spontaneous standing events throughout the journey.

Date TBC (expected early August): Arrival in Trondheim and welcome by the Pilgrimssenter at Nidaros Cathedral. There will be an opportunity to stand in the stone.

Date TBC: The return of The Orkney Boat. The stone and I will return to Orkney, where the stone will become a lasting sculptural installation to be used again.

Beatrice Searle is a fine art graduate of Newcastle University and a recently qualified stone mason, having completed her apprenticeship at Lincoln Cathedral last year. She is now an (itinerant) artist, working across performance, sculpture and drawing.