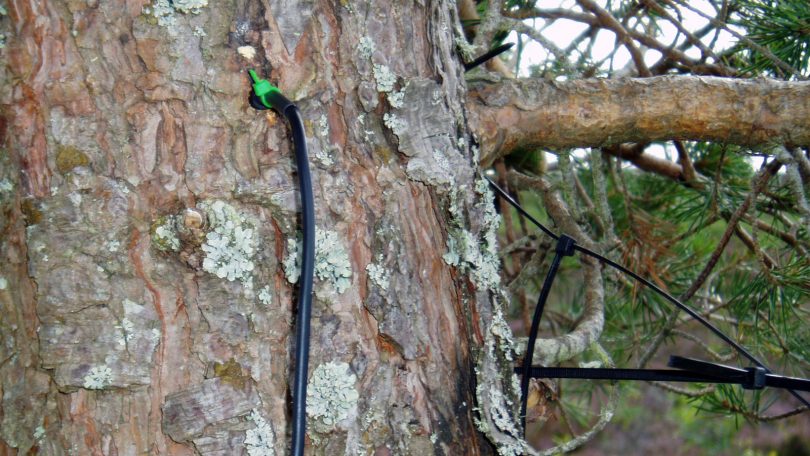 Suddenly there was a grinding noise and an array of meteorological instruments rose slowly from the Heriot-Watt igloo. There is another array of instruments on the Met Office tower next door. Both have different strategies to protect the instruments from icing – one uses tons of stone, the other kilowatts of electricity. I wondered if I could invent a more efficient, more elegant solution to measuring wind speed and direction in the mountains.

If you are washing the dishes and are curious to know how windy it is outside, you look through the kitchen window at the trees. The Beaufort scale (land version) allows you to estimate the speed from the way the leaves, branches and trunk move.

Could I gather a more accurate estimate of speed, with the bonus of direction? A flexible, vertical rod might work, and it would keep itself ice-free by its own flexing?

After much trial and error I had a tapered 2-metre carbon fibre tube with a triple axis, digital accelerometer at the tip. A cable connected this to a desktop computer.

I set about writing programs to process the chaotic signals. The windWand drew a mess of ellipsoids, figures-of-eight and often just squiggles.

However I eventually hit on a way to distil from this muddy puddle of figures two drops of clear information: wind direction and wind speed. I’m not giving the exact method yet, just that the formulas could all be found in Standard Grade Maths (Credit Level).

I then wondered if there might be a commercial application in wind surveying for forestry or wind farms. It might also appeal to people who want to supplement a simple home weather station with wind data. I also thought of disguising the carbon fibre tube as a plant for aesthetic reasons.

During this time I had moved from Stronsay to Kinlochbervie to Lairg. All are beautiful places to live, but Lairg has something the other two don’t – trees. Instead of disguising a carbon fibre windWand as a tree why not turn a whole tree into a windWand?

I loved watching Fred Dibnah’s TV programmes. In one of them Fred needed to get something or other to the top of a tall tree. He made a bow and arrow to shoot a thread over a high branch. It didn’t work first time, so he taped an 11/16th Whitworth nut to the tip of his arrow and fired that over the tree!

Modern Health and Safety precludes encouraging members of the public to emulate Fred Dibnah, so how was I to get the accelerometer to the top of a 30-metre-high pine tree?

Just because it had been at the tip of the carbon fibre pole did not mean that it must be at the tip of the tree. Maybe instead of the sensor being high and the data travelling downwards through a wire, the data could travel down through the trunk and could be detected much lower down.

To get the necessary sensitivity it was critical to zero the accelerometer accurately. The ADXL345 has offset registers for each axis but I found a method 10 times more accurate. (The windWand will now interpret a small earth tremor as a gust of wind.) Some time soon, I will make all the source code available under the GNU Open Software Licence.

The next problem after zeroing is calibration for wind speed. The original concept of the windWand was to manufacture a standardised carbon fibre tube that could be pre-calibrated. Unfortunately  every tree is different and most are not even radially symmetrical.

My original trade was as a geneticist and I have always been fascinated by the  problem solving capabilities of evolution. I taught myself computer programming later in life to enable me to write genetic algorithms, mainly to prove to doubters that evolution actually works. But now I had an opportunity to use a genetic algorithm to solve a real problem.

A genetic algorithm is a population of possible solutions all reproducing, mutating and even mating. Slightly more successful solutions out breed worse ones. The organisms (calibration formula) evolve to fit their environment (their tree).

For evolution to work there must be selection. There must be some measure of fitness. I plan feedback to come from two sources, one intrinsic to the windWand which I’m still working on.  This would be necessary in the remote data logger mode.

The other source of feedback is quite simply the end user. I will build into the human interface a simple way the user can feed true wind speed back to the windWand.

In the early days the user must go out occasionally with a hand held anemometer or look up the current Met Office data. If they can’t be bothered doing this, the windWand will need to rely on its intrinsic method and learning/evolution will be slower. After training, the windWand reports a value just like any conventional instrument.

The final version of windWand will not use a computer as a human interface. Instead I am developing a small, independent unit with its own micro-controller. Human input will be by tilting and tapping the unit. Output will be old fashioned 7-segment LEDs. The retro style box will be wood.

Will it all work? Who knows!

So how does an invention evolve? If you pick a loose tuft of wool from a barbed wire fence and stretch it between your hands, it now has a beginning and an end.

If you twist it between your fingers you now have a thread, like the narrative of this article. That’s what invention looks like from the outside and afterwards.

But being a lone inventor isn’t anything like that. You are just a short-sighted wool-mite crawling among the tangled threads, wondering if things look a bit brighter in one direction.