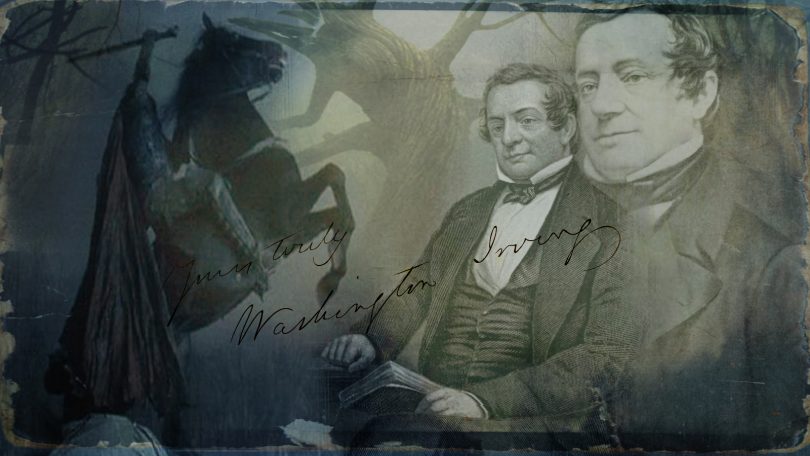 An Imaginary Portrait of Washington Irving

The History of New York was a comic novel published as an elderly Dutchman’s account of the founding of New York. The book was so popular that the invented name Knickerbocker was adopted by New Yorkers for, among many other things, their baseball team, an ice-cream sundae and the breeches ending at the knee that looked like those worn by the Dutch settlers in the book’s illustrations. His depiction of St Nicholas as a jolly fat Dutchman who brought presents to children in a flying cart was borrowed for the poem T’was the Night Before Christmas, leading directly to our image of Santa.

Geoffrey Crayon was even more influential, creating the literary format of a miscellany of essays and short stories, and containing some of the very first short stories intended purely for entertainment. Two of these were so successful that they are still well-known today: Rip Van Winkle and The Legend of Sleepy Hollow.

Two of the sketches in the book seem to be a clichéd description of an English Victorian Christmas. This is because they are where our images come from. Irving’s friend and admirer Charles Dickens freely admitted he borrowed from them for Pickwick Papers and A Christmas Carol. He and Irving deliberately set out to popularise the Christmas festival.

Scott became a friend after Irving visited him while touring Britain. Scott introduced him to his publisher John Murray so Irving’s books had a wide circulation on both sides of the Atlantic. For thirty years Orcadians enjoyed these and his other books with no idea that Orkney could lay claim to another famous son.

Then in 1850 Henry G Bohn published Irving’s work in his Popular Library, claiming John Murray’s copyright could be ignored as it didn’t apply to an American author. Murray, seeking to prove Irving’s British connections, wrote to ask him where the family came from and got the rather vague reply that his father had come from Shapinsay in the Orkney Islands.

Murray wrote to the authorities here, asking for help in tracing the family. Of course, this aroused interest and curiosity and the Sheriff Substitute James Robertson and County Clerk George Petrie set to work immediately, tracing the family rather further back than necessary, to Robert the Bruce’s friend and armour bearer, Sir William de Erwyn, whose second son William anglicised his name and moved to Orkney.

The Irvings of Sebay were an important family in the islands for several generations but by the eighteenth century Washington’s branch of the family were small farmers at Quholme in Shapinsay.

Washington’s father William went to sea, becoming a petty officer on the Falmouth packet, the armed ships that carried mail out of Britain during the wars with France. He sailed regularly to New York and, after marrying a Falmouth girl, Sarah Sanders, emigrated to New York in 1763.

William became a merchant in New York and during the Revolution, although relatively recent arrivals, he and his wife supported the colonial cause, taking food and blankets to prisoners of war in the British-held city and, in 1783, naming their eleventh child after America’s first president.

Washington Irving trained as a lawyer and was admitted to the bar in 1806 but said himself that he knew very little law and never went into practice. He tried his hand at writing instead, eventually becoming America’s first full-time author and a deeply loved celebrity.

When Bohn settled the copyright case out of court, Murray lost interest in the family pedigree and the Irving family didn’t seem to feel any connection with the islands. Then Washington’s nephew Rev. Pierre Irving, having seen a reference to the family’s connection with Robert the Bruce, extended a tour of Europe to come to Orkney, making him one of the first tourists to visit Orkney in search of his family history. Like so many who came after him, he was given a great welcome and was shown the family home and quantities of historic documents. Some things have changed since then: he was given the three oldest documents to take back to America.

Irving wrote to a friend,

The whole story of Pierre’s visit to the Orkneys is interesting, and the genealogical research in question, which had been going on for several months before his arrival, is a curious instance of Scottish antiquarianism and the national propensity to trace up pedigree.” George Petrie sent Irving an expanded family tree, “in token of the pleasure he had taken in connecting him so closely with Orkney”.