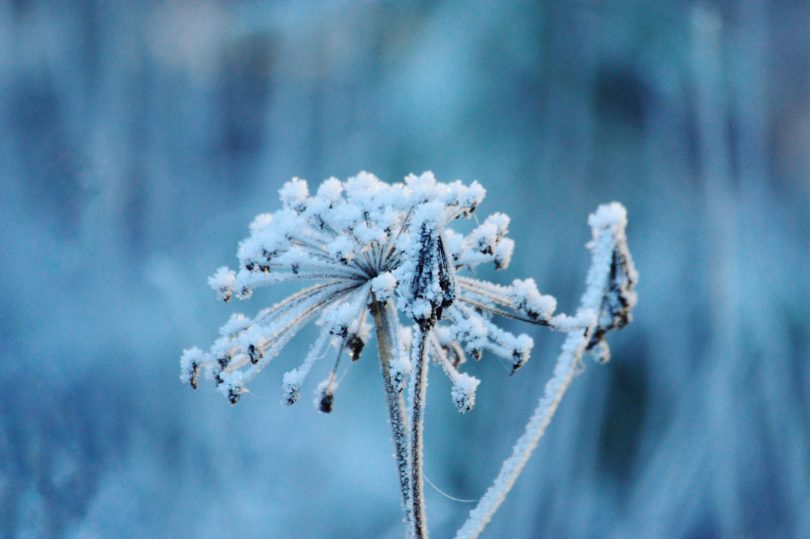 The sea makes us complacent – water from the Caribbean streams north through our islands bringing summer visitors, leatherback turtles and jellyfish, but on a clear November night the stars fill the dark dome above our heads and the coldness of space reaches down.

In the morning you walk on a white starched blanket, your breath a visible cloud. Sword blades and spear tips sparkle on the grass. Frozen puddles splinter beneath your boots.

The tideline is alive with starlings and rooks eagerly searching for sandhoppers beneath the seaweed. The land is iron hard for probing beaks, the sea ensures life.

If the frost is very hard the lochs freeze over. In the 10th century the Viking Earl Rognvald skated on Stenness Loch using bone skates. No one skates now – global warming means prolonged frosts are rare.

A quick spell of black ice causes chaos on the roads. Cars slide into ditches and into each other slowly and inevitably, like icebergs – the gritters appearing when the sun has melted the danger.

I began to wear a knitted hat in a year when part of Kirkwall harbour froze – I could feel the heat leaking from my head till it ached.

A hard frost can ice over the rigging of a ship and make it top heavy. ‘Light icing in south-east Iceland’ is not a coded message to bakers – it means fisherman will see their hawsers and upper deck filmed with ice that can only be removed with axe and hammer.

Freezing water expands with enormous force – it can split an engine block. An unlikely event now, but a frost reminds you to check your anti-freeze. I was once negligent and discovered ice in my radiator – a narrow escape.

There was a time when ice covered this land and ground the rock to flour, scouring the landscape to its present form. A few living remnants of that era remain. On Hoy the blue hare dons its white winter coat hoping for snow to blend into, char brace the freezer-like cold in Heldale Loch, and alpine plants hug the wind-scarred tops. In summer, Arctic skuas pirate the sea cliffs.

Vagrant sightings excite and hint of the polar edge. Walking in Rackwick a few years ago, a snowy owl exploded out in front of me from a clump of scrubby trees – that year one had been seen in Shetland and a young walrus was seen in the Pentland Firth.

It would take little, they say, for things to get very cold here – just for the Gulf Stream to dip south, but the signs are the opposite for now.

Orkney flirts with the Arctic, enjoying its bright nippy days, between the oceanic blasts.