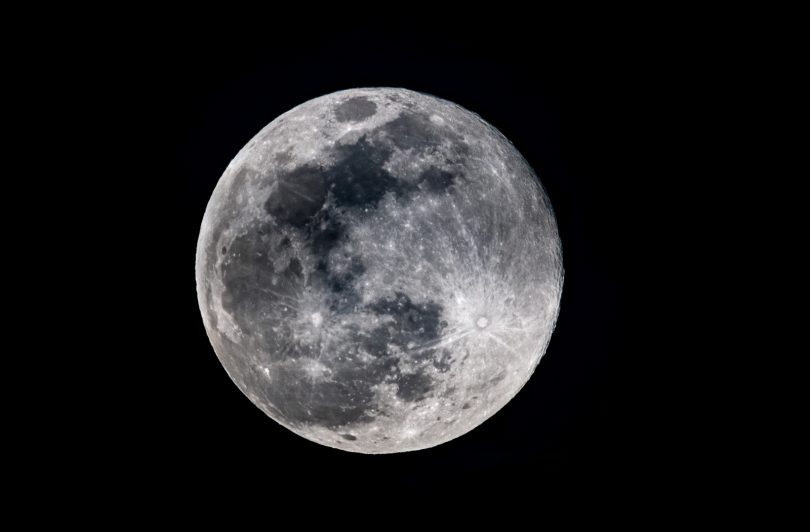 A few months ago, I moved from Orkney to Berlin but the moon is following me around. It texts to tell me when it will be out. Through the windows of my flat in Kreuzberg, near where the Berlin Wall used to run, there is just a parallelogram of sky at the top of the courtyard (‘der Hof’ in German), only a small space to catch the passing moon on certain clear nights.

The app on my phone uses my location to tell me the moon’s phase, direction, distance at all times. Right now (I’m just home from work, vibrating with tiredness), the moon is 384,012 miles away from my hand, holding my phone close to my heart, as I sit at my kitchen table. It’s in Waxing Gibbous stage and is 25.2 degrees above the horizon, almost due east. It rose just after midday and will set around 3 am.

l consult my digital charts then wait for the moon. My bath is next to the window and I open it wide to the cold air. I hear stray cats mewing in the stairwell, magpies rattling in the bare trees and the indistinct rumble of the city that reminds me of the wind back home. The first I see of the moon is its reflection in my opposite neighbour’s window: a bulbous glow in a double-glazed mirror. Then, over the evening, it passes like a distant ship. I keep going back to the window and am thrilled to catch its oblivious light. I know it’s the same moon as in Orkney.

In Stromness there was much more sky. One evening the moon was huge and orange, low above the town and the sea, and I watched from Brinkie’s Brae and updated Twitter. It was ‘Supermoon’, when a full moon coincides with the closest point of its orbit to earth – its Perigee. Because of the moon’s proximity to the horizon and the refraction of light through the earth’s atmosphere, it appeared bigger and redder than usual. Each full moon has historical, poetic names – and this February sight was the Snow Moon or Hunger Moon, when larders were empty and nights cold.

I grew more aware of the moon and in particular its effect on the tides when I was back home in Orkney over the last few years. Low tide at new moon is the time to dig for spoots on the beach, and after a full moon to go looking for things washed up – driftwood and treasure – at the highest water line. On Papa Westray, I awaited Syzygy – when moon, earth and sun are aligned – twice a month.

The internet is hectic and I go to the moon to relax, opening new browser tabs for the moon’s Wikipedia page and Google Maps of the moon. I follow new lunar developments from NASA and learn things. I learn that the moon was probably once part of Earth, sheared off by an asteroid. My friend who moved from Scotland to Tasmania tells me that there is a different moon in the southern hemisphere, it waxes and wanes in the opposite direction. I learn that the moon is slowing down earth’s rotation. The moon is holding onto us.

People on the internet ask questions. What is the moon made of? Why can I see the moon during the day? Why is the moon red? Can the moon be destroyed? I find a historical calendar and am disappointed to learn that I was born not on a full moon but when it was waxing at 81 per cent.

In Berlin, I’m 600km from the sea but have been reading about Greek islands and mermaids and tides. I’ve been here for four months and have lived in five houses. I had a love affair that lasted for two nights and two afternoons. People in this town can’t commit to anything but the moon is always orbiting and the months pass relentlessly. I don’t speak the language but I know ‘der Mond’.

I’ve run away but I find the moon everywhere I go. I found a tiny pink plastic crescent in Tempelhofer Feld – a huge park in the middle of the city – right there on the footpath. In a bookshop in Kreuzberg, I found a beautiful lunar calendar and have it blu-tacked to my wall. That’s almost all I have in my diary for 2015. The year is a blank but I know what the moon will be doing. There will be a partial solar eclipse on 20 March, the vernal equinox, and also the day I will have, I hope, been sober for four years.

The moon has now passed over the Hof to behind the buildings but I’m looking at astronomer Bill Leslie’s lunar mosaics – they are magnified, monochrome and glowing. It’s late January and the city is dim and I’m madly seeking moonlight and patterns and safety. With my photographs and technology and eyes, I’m in a digital, celestial relationship: the moon is my boyfriend.