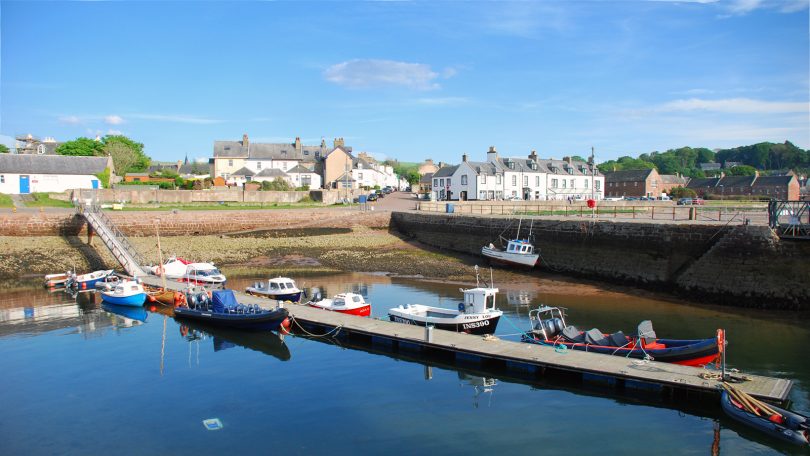 When I walked down the main street of Cromarty on a sunny August day at 1.15, I saw only two people. Save for the cry of seagulls, there was not a sound. Then, in the empty street, I heard the tinkle of knives on plates through an open window. I thought perhaps that later on the people would appear.

But no – at three o’clock it was just the same. Old houses, crow-stepped gables, sweet old-fashioned gardens, a huddle of grey roofs along the shore, a church tower, a foreign-like cupola on the tower of the Town House, a cloudless sky and a sapphire sea, with the bold bluff of the Sutor standing like a sentry to guard the gateway of the Firth.

I walked down the vennel where a few fisher-folk were mending nets or baiting lines. Here, as in all ancient fishing towns, the houses are built higgledy-piggledy in a gable-endy confusion which is very picturesque. A lazy seagull was stalking quietly down the passage, so that I had almost to shoo it out of the way before I could get past.

In the old churchyard I came upon another bird, a young seagull this time, asleep on a flat stone. When I approached, it opened its beady eye for a moment, then closed it, and went to sleep again.

There is an old house with very thick walls tucked away modestly behind a garden. In the cellar there is a passage. Here, long ago, an exciseman was dealing with some smugglers. A shot in the dark, and the wrong man was killed. How many more tales of hair-raising adventure could these old houses tell?

For Cromarty of old was full of seafaring men, captains courageous, navy men who had suffered from the pressgang, and douce kirk-going burghers. Then it was in close touch worth foreign parts. Now that the fishing has failed and gone elsewhere, it is like an old man dovering in the sunshine, the grey roofs and the warm pink stone of the houses reminding us of his grey hair and his rosy cheeks. For that very reason here is an ideal resting-place for those who would spend a quiet holiday and relax in the caller winds of the sea-blown burgh after the stress of a city life.

I stood again and again gazing at a beautiful old three-storeyed house. It stands back from the street, surrounded by trees. A great flight of twelve steps leads up to a square stone porch. The ancient gateway is flanked by two elegant stone pillars. At the side of the garden wall a ‘crown of the causey’ leads up the cobbled brae to the church and churchyard on the hill, and you can look down into the garden of this old eighteenth-century house, with its two flanking wings, as you go by.

I stood in the mellow sunshine looking and listening, and I seemed to hear the tinkle of a spinet, the sweesh of high-waisted gowns and the tap of buckled shoes on the floor, as a little company of gaily dressed men and women danced sedately to the minuet. Just then the town clock chimed a lazy three o’clock, and I awoke from the dream.

Above the town, on the very ancient site of the old castle of the Earls of Ross, stands that greater mansion of Cromarty House. Up a little brae among the trees you can see the back entrance to that stately dwelling – a dark tunnelled passage which must have given the creeps to many generations of domestics as they stole home late on the pitchy nights.

But to me the rarest sight in Cromarty is a humble little thatched cottage with a crow-stepped gable turned to the street. Here Hugh Miller was born. He began life as a working mason, and, as he tells us in one of his books – My Schools and Schoolmasters – he was practically a self-educated man.

He had a passion for geology, and found many of his most famous fossils in the Old Red Sandstone, especially in the neighbourhood of the Ethie Burn. He was a devout man, but he lived in an age when most Christians took for granted that the earth was made in six days.

When Hugh Miller proved by his geological researches that the world took aeons of ages to grow he was greatly misunderstood and even abused, by the narrow-minded church folk of his day. He was not only a famous geologist; he wrote many books, and latterly went to Edinburgh, where he became the editor of The Witness newspaper.

This is not the place to revive old controversies. But when you enter this humble cottage and look round you at the poor birthroom; at the collection of his books and fossils; at the letters written to him by Queen Victoria, Lord Brougham, Agassiz the great naturalist, Darwin and Thomas Carlyle; at his mason’s wooden mell, and his old shepherd-tartan plaid – you realise that the greatest product of Scotland in all the generations has been men like Robert Burns, David Livingstone, and Hugh Miller. Each was born in a lowly cottage. Each rose to a fame that is greater than any fortune. By their sheer genius and grit they all overcame the difficulties that life threw in their way. Their names are written for ever in the history of their native land.

Thomas Ratcliffe Barnett was a Church of Scotland minister, wartime chaplain, writer and musician who was born in 1868 in the weaving village of Kilbarchan, Renfrewshire. He wrote lyrically about his travels in Scotland and the people he met on the road. He was active in caring for the casualties of World War I and founded the Princess Margaret Rose Hospital in Edinburgh. He died in 1946.