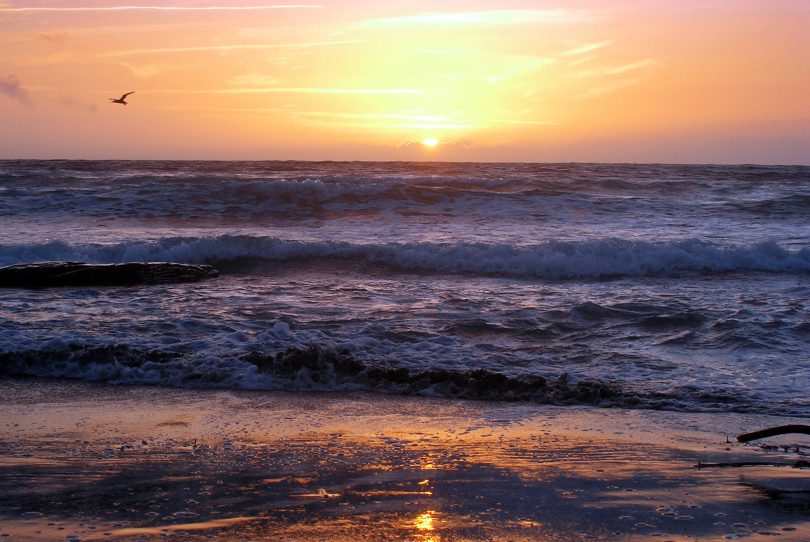 It was a clear night, the sky cloudless. Behind the croft, to the east the sky veiled itself in a deepening darkness that crept above them imperceptibly westwards. Stars were beginning to wink in this darkening silk and a moon rose. Yet the while, in the west, the horizon glowed like a dying fire.

A curlew called, that plaintive call that speaks both of the present and the past.

Tonight, tonight he might see the green flash. The orb of the sun sank lower, more quickly than he expected, the edge of its circle tangented the sea. It was then, just as it slipped below, a green fluorescent glow briefly suffused the horizon.

It was over before he could take a breath in astonishment.

Despite the loss of the sun the sky continued to glow blood red, the colour diffusing upwards and spreading to each side.

Two swans flew by, black in silhouette, their wing beats fluting the air.

It would not get dark. At this time of year it would stay like this, time and light suspended in the grimlings, as the local people called the dusk – only now near midsummer the grimlings extended through till dawn.

There was no silence. Oystercatchers called urgently to each other, coots gave their friendly squawks amongst the reeds on the loch, by now utterly smooth and black.

On the surface a slight mist began to form and build above it like white wool.

The air was still, expectant; a night, thought Erik, when things could be born gently into the world.

And there on the storm beach, below the loch, lying in the seaweed, a common seal mother, her body twisting as muscles contract, at last expels a young life. Slippery and wet, blue and freckled with white, he slides from her body.

There in the moonlight and the grimlings of the sun he takes his first breath. The air is moist, cool. He hears his first sounds; the lapping of the waves, his mother’s low calls and her breath. It seems from a far distant land, from deep time as many before him he has been cast on this beach.

Soon he suckles from his mother, the warm fatty milk flowing into him, into his bloodstream – her energy, beyond the umbilical cord.

He sleeps, belly full, content in this new reality.