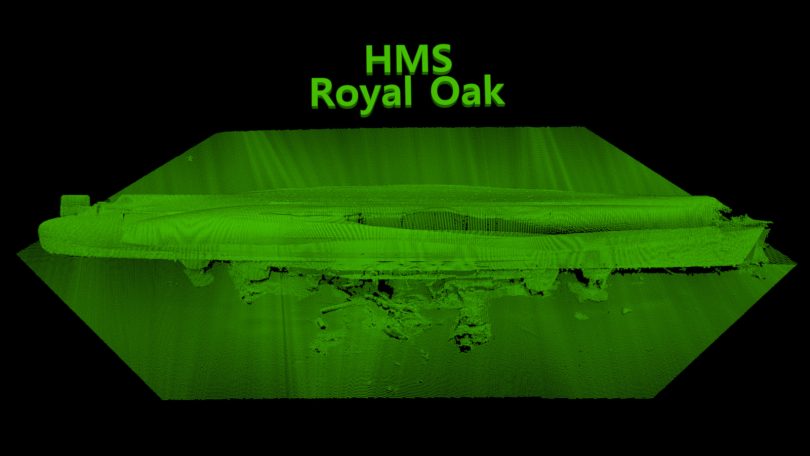 The hologram was made for the Ministry of Defence by the Edinburgh company Holoxica Ltd, as part of the MOD’s ongoing effort to monitor the state of the wreck, an official war grave.

The war was only a few weeks old when a German U-boat slipped through the naval defences and found herself in the heart of what was thought to be the Royal Navy’s most secure harbour. Blockships had been sunk in key channels between the islands circling Scapa Flow, careful study of maps and aerial photographs had enabled the German naval command to identify a very narrow route that would be just passable on a night of a very high tide.

Hit amidships by torpedoes, the Royal Oak sank in a short time, and over eight hundred men were lost in the darkness, many of them caught up in the escaping bunker oil from the stricken battleship. The story of the Royal Oak is told in many places, including several books and various YouTube videos.

In order that the condition of the vessel can be carefully monitored, the Ministry of Defence commissioned a detailed underwater survey. The work was carried out by a St Andrews company, ADUS UK, who used multi-beam sonar to create a three-dimensional picture of the wreck and the seabed around her.

This data was then used to create a hologram, in what seems to be the first ever use of sonar information of such a purpose.

The work was carried in Edinburgh by Holoxica, which specialises in 3D holographic imaging. The company built on military visualisation technology for the work, and says that the resulting hologram of the Royal Oak and the surrounding seabed is accurate to within ten centimetres.

The hologram went on show at the Orkney Museum in Tankerness House, Kirkwall, during the period of the 2012 Orkney International Science Festival. A base for the plate was specially constructed by the Museum’s gallery technician, Ian Smith, so that visitors to the Museum could walk around the hologram and see the image of the wreck from all angles. A spotlight above shone light downward onto it.

It has been a popular exhibit here in the entrance of the Scottish Microelectronics Centre, where we are based, for the past six months or so. I feel that it is now time to send her back to where she belongs and I am glad to take this opportunity to donate the hologram to the Orkney Museum.”

The company’s generosity was warmly welcomed by the Museum’s exhibitions officer, Tom Muir, who describes the hologram as “a very exciting and poignant display”.

It is a case of 21st-century technology bringing the past into sharp focus by creating a 3D model that seems to hang in space before your eyes. The whole thing was created using scanning devices, so the wreck itself was not touched. It is quite amazing.”