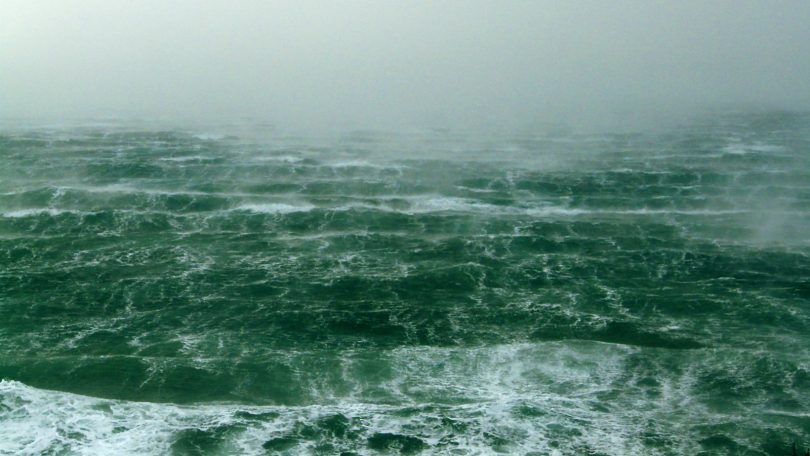 Otterswick today is a great arc of a bay with drifts of blown sand, but far down the beach, at the lowest extent of the tide, there are clues to an older landscape. A storm in 1838 cleared away a swathe of sand to reveal fallen trees lying on a bed of black moss, skeletons of an ancient woodland. They lay in the same direction, as though felled by some sudden surge of wind or sea. The sand cover soon moved back, but in more recent times geomorphologist Dr Alistair Rennie of Scottish Natural Heritage went in search of them, and he found under the sand a layer of peat containing tree branches. Samples of wood were identified at Glasgow University; they came from willows that had once stood three metres tall. Carbon dating showed them to be 6,500 years old. So the Bonnie Woods of Otterswick of the legend did indeed once exist before the sea rose to cover them.

In Eday the question was: ‘What’s become o’ the bonnie woods o’ Skaill?’ – and here too tree roots have been found at the very lowest tides. In Egilsay it was: ‘And do they still mow the meadow of Veantrow?’ And Veantrow is a large bay on the north side of the neighbouring island of Shapinsay. It seems that the versions of the story are picking out elements of an older submerged landscape. The Sanday folklorist Walter Traill Dennison noted a phrase used by older Orcadians of his day – ‘in a’ the braken isles of Orkney’. This, he suggested, could refer to the way that the rising sea could have ‘braken’ (broken) the land into further islands, holms and skerries.

Tree roots beyond the tidemark are found in various parts of the coast of the British Isles – and there’s more. Amongst the stumps of fallen trees at Borth in west Wales there are burnt stones in the mud. They were found by a man who well placed to investigate them – Denis Bates, who’s a retired Aberystwyth geologist, with two sons, one of whom (Martin) is an archaeologist, and the other (Richard) a geophysicist. They came to investigate and found traces of animals – and people, including the footprints of a young child.

The melting of the great ice

Why are there traces of an ancient world beyond the tidemark? Because up until around 10,000 years ago, much of northern Europe was covered with ice – and on such a massive scale that it locked up water that today is back in the sea. As the ice melted, the sea came flooding back, washing over trees and drowning a landscape.

There have been hints for some time of ancient habitation on land that is now below the waves. In 1982 David Long of the British Geological Survey was sampling material from the seabed off Shetland, and he made a remarkable discovery in a core from about eighty miles east of the island of Fetlar. It is a tiny piece of dark grey flint, no bigger than a 10p piece; but it has clearly been shaped by human hands, quite delicately, and it was identified by archaeologist Caroline Wickham-Jones as a scraper. The flint comes from a depth of 143 metres of water, in the area of the Halibut Bank. The sediments in which the flint was found have been dated to around 11,000 years ago, at a time when the area was an island, and the scraper’s location is close to the shoreline – just where we would expect to find people, living from the sea.

There have been other finds. In 1931 a trawler brought up an antler spear, 25 miles off the Norfolk coast. It was dated to 13,000 years ago. In 1998 the Exeter University archaeologist Professor Bryony Coles looked further at the seabed location and started to build a picture of what it would have looked like when the sea level was much lower than today. As her maps developed, she gave it the name Doggerland, after the region in the BBC Shipping Forecast.

Archaeologists at Birmingham University probed further. Professor Vince Gaffney and Dr Simon Fitch realised that there is today a massive archive of information about conditions beneath the North Sea. For many years the oil and gas industry has been mapping the geology of the seabed, looking beneath the sediments to build a picture of the contours of the terrain beneath which was once dry land. So the Birmingham archaeologists asked the industry for help.

They received a very positive response, and as the data flowed in they began to piece together clues to the outlines of a lost world. First they worked out the bed of a river, winding across the Dogger Bank. Then came the ghosts of estuaries, hills, marshland. They tested their predictions, and sent down vibrocores to drill on a point on the river. And sure enough, up came the signs of an ancient landscape – a layer of peat with hazel nuts, reeds, wood and beetles. Carbon dating put it at 8,000 years ago.

From Skye to Sutherland

Meanwhile evidence has been coming in for people living around the Scottish coast at that time. Caroline Wickham-Jones excavated on the west coast of Scotland, at the head of a sea loch in the island of Rhum, just south of Skye. There she found evidence of Mesolithic hunter-gatherers at around 8,000 years ago. She went on to work with Karen Hardy in the area between Skye and the mainland, and they found several more sites, all coastal. A number of the sites contained artefacts made of bloodstone, a hard flinty rock found on Rhum, suggesting trade and sea travel.

Further north, Caroline located a scatter of Mesolithic flints at the mouth of the River Naver in Sutherland, on the south coast of the Pentland Firth. The picture was emerging of people for whom the sea was a source of food and a link between communities. The growing question was – could they have crossed to Orkney?

The evidence was sparse. Some flints had been recorded from past excavations, but several of these had been found in the area of later Neolithic sites, and others were isolated examples; so it was difficult to draw conclusions. But encouragement came from a visit to the farm of Redland in the parish of Firth, where Eoin Scott showed her a small tobacco tin with various delicate flints which he had found while ploughing. The farm, tucked down beneath the shelter of the hill where the Redland Burn runs down, is a good location for settlement, with Neolithic and Iron Age sites. And among the flints in the tin was one which was she recognized as Mesolithic.

By 2004 Caroline had come to live in Orkney and she was on hand in the autumn of that year when a team were excavating a Bronze Age mound at Longhowe, in the East Mainland. They found flint fragments and called her in to investigate – and sure enough, she confirmed the material was Mesolithic. And not only that. Beneath the Bronze Age burial was a series of post holes – suggesting a characteristic Mesolithic timber building. Further work in 2007 confirmed the existence of a Mesolithic campsite below the Bronze Age barrow.

These discoveries effectively doubled the span of known human settlement in Orkney. For long it had been assumed that the builders of Brodgar and Maeshowe came to colonise an empty land. The Mesolithic evidence showed that a resourceful and skilled community had been living in Orkney for 4,000 years before their arrival.

This meant that the hunt was well and truly on for the earliest Orcadians, and the next development was made by a team from Orkney College. There had been a report of a flint arrowhead found in the 1920s in Stronsay. Naomi Woodward of Orkney College went in the summer of 2007 to look at possible sites in the island and discovered two flint arrowheads. They were identified by Caroline Wickham-Jones and flint specialist Torben Ballin as a type of tanged point found across the plains of north-west Europe, from Mesolithic times. The people who used such arrowheads lived in cold conditions, on the rim of the ice. In central Europe they hunted reindeer with bows and arrows, in a landscape of tundra with bushy arctic white birch and rowan. In Scandinavia they lived close to the sea, catching fish and hunting seals. The period in which they lived is over 10,000 years ago.

Naomi Woodward returned to the site the following spring with a team of five other archaeologists and found more evidence of ancient Orcadians. They discovered a huge quantity of flint – ‘over a thousand pieces,’ she said, ‘lots of very fine blades and microliths and the debitage you get from flint knapping.’

Meanwhile further south, Torben Ballen had been studying a quantity of flints from a site near Biggar, in south Lanarkshire. He and Alan Saville of the National Museums of Scotland identified the style; it was very similar to that found in southern Denmark and northern Germany, from a time around 12,000 years ago. This was the time of Doggerland, when you could walk across much of the area which today is covered by the North Sea. So we are starting to see the outline of a world in which Orkney and Scotland are part of a bigger territory, linked to Europe by the great plain of Doggerland, more than ten thousand years ago. And with the various teams of researchers continuing to probe further, a picture is building up of a land beneath the waves, a land of birch and hazel, pine and oak, with animals to hunt in the woodland and on the plans, and fish in the rivers – a lost land that is now being explored again.