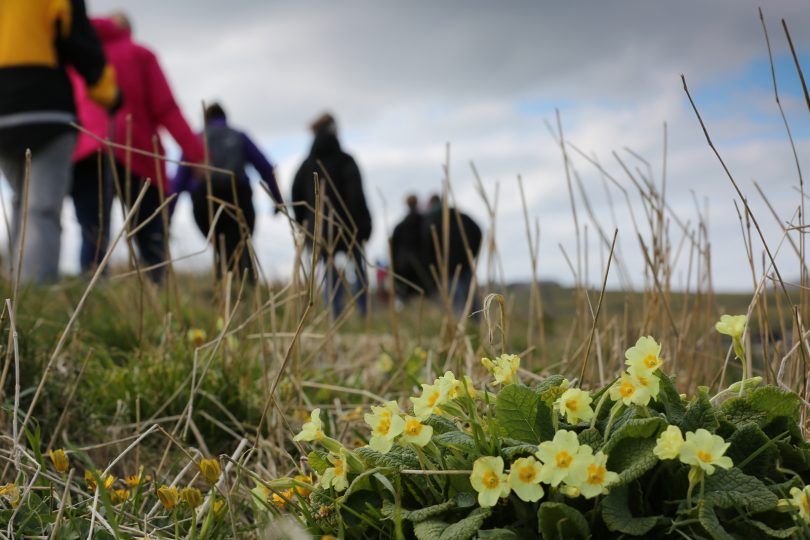 At the event in the Orphir Church, on the morning of Thursday 7 September, he will give a selection of tales from walks around the British Isles, from the ancient oaks of Sherwood Forest to the seabird cliffs of Foula.

His opening talk will be preceded by a brunch served by the members of the Orphir Church, with hot and cold rolls and tea and coffee, after which the walkers will be able to set off on the 10-mile journey to Kirkwall.

For the final stage of the pilgrimage, the route again follows the coast as much as possible,” says the Rev. David McNeish, the chair of Orkney Pilgrimage which has brought together the St Magnus Way for the 900th anniversary of the death of the Norse earl and saint.

Our theme for this final stage is Hospitality – reflecting on the place of feasting in the medieval world and our own mealtime traditions as well as the place of welcome afforded Magnus in Kirkwall, and the reception we ourselves anticipate.”

The route goes through the RSPB bird reserve at Waulkmill and then along the coast past Griffyelt to Greenigoe. A short road section to Foveran then leads back to the coast and Scapa Beach, then on the Crantit Trail to Kirkwall.

At Kirkwall the walkers will head first for the harbour, since the Cathedral once marked the waterfront, and then pass the site of St Olaf’s Kirk where the body of St Magnus was first taken, before approaching the Cathedral from the north. Pilgrims will then receive a pilgrim shell from the Cathedral custodian, Fran Flett Hollinrake.

This is not quite the end as there will be a final procession from the site of St Olaf’s Kirk to St Magnus Cathedral in December, to mark the end of the Magnus 900 year,” said David McNeish. “It has taken a huge amount of hard work to make it all the way to Kirkwall from Evie. We’d like to thank all the volunteers, and all the landowners, who have made Orkney’s first long-distance pilgrimage route possible.”

A man for all seasons

Christopher Somerville has spent 25 years writing and broadcasting about country walks, and written 36 books. His most recent book, The January Man, looks at his relationship with his father, a naval commander who served in the Mediterranean in World War II and then in military intelligence at GCHQ.

He learned clues about his father’s life during their walks together.

Walking promoted talking,” he says, “and in the end produced a kind of understanding we came to value.”

The opening event, which starts at 10 am, will be a joint one with Orkney International Science Festival, which he will open at the same time. Tickets for the event can be purchased online from the Science Festival’s website www.oisf.org or from the Tourist Office in Kirkwall. The tickets, costing £6, include rolls and tea/coffee.

For those on foot, there is transport from Great Western Road in Kirkwall. A service bus leaves there at 9.25 am, and drivers are also being encouraged to meet at the car park in Great Western Road to life-share out to Orphir Kirk. Return lifts from Kirkwall to Orphir will also then be possible.

More information about the St Magnus Way can be found at www.stmagnusway.com.